I was so focused on the iPhone 3GS and Snow Leopard announcements from this year’s WWDC that I almost missed the gravity of the MacBook Pro announcements.

Apple announced price drops on nearly all of its laptops. The new lineup looks like this:

If you want an all aluminum body, you have to buy a MacBook Pro. There’s only a single MacBook model and it’s the white chassis that’s been around for a while now.

Apple added a 13” MacBook Pro to the lineup to fill in the gap, although it’s not clear to me whether this 13” MacBook Pro uses the same LCD panel as the old 13” aluminum MacBook or a derivative of the 15” MacBook Pro’s panel, which is superior.

Of course there are different models within each one of these categories that you can purchase, but they are irrelevant to the discussion we’re about to have. Look at the battery life row in the table above; Apple is claiming up to 7 hours of battery on the new MacBook Pros. The old specs used to be up to 5 hours.

Apple did some clever work on its own here. Standard lithium ion batteries are made up of cylindrical cells, similar to AA batteries. The problem with these batteries is that they waste a lot of space within a notebook (try cramming a lot of cylinders into a box, you end up with wasted space). This wasted space translates into larger batteries than are necessary, which makes for larger notebooks.

In order to continue to drive laptop thinness down, Apple started experimenting with using custom lithium polymer batteries instead of the industry standard lithium ion parts. Lithium polymer cells aren’t made of cylindrical cells (they’re rectangular), so there’s no wasted space. Not only does this make the batteries more compact, but it also gives you greater capacity since you’re using all available chassis volume for the battery.

Apple also found that it was wasting space in the removable enclosure for the batteries as well, so its lithium polymer offerings are no longer user removable. I suspect this part of the equation has more to do with cutting costs than saving space though.

Apple first used this lithium polymer battery technology in its MacBook Air. It gave Apple a very thin battery that allowed it to create the MacBook Air’s sweet form factor. Then came the new 17” MacBook Pro, without a removable battery. Apple claimed that this battery would last for five years before it needed replacing and resulted in up to an 8 hour battery life. 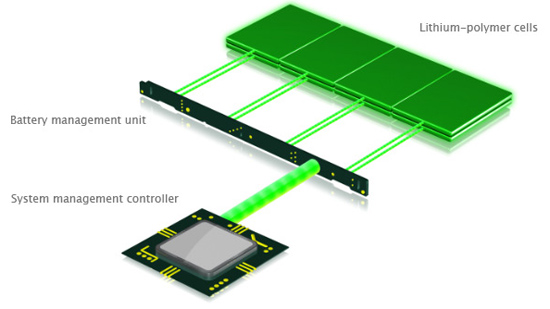 The extended life is supposedly due to an on-battery sensor that communicates with the system's management controller that can dynamically sense the needs of each lithium polymer cell and feed that info back to the charging circuitry. The result is slight variations in charging current designed to optimally charge each and every cell; apparently reducing wasted charge cycles significantly. Apple claims that most cells will hit 80% of their life after 200 - 300 charge cycles, but its special lithium polymer batteries will hit the 80% mark after as many as 1000 charge cycles. Apple claims its unique battery chemistry and microprocessor managed charging (Adaptive Charging) is responsible for these gains but it’s a difficult statement to prove; we’ll have to wait and see what happens after a few years of use.