Memory bandwidth normally improves with increases in memory speed and reductions in memory timings. This is best illustrated using Performance Scaling charts instead of Bar charts for individual speeds.

Since the results for high-end memory are so close at all tested speeds, the scale range was reduced to better show the small differences in these memory benchmark results. Please keep this in mind when viewing the charts, since a normal zero scale would make performance differences appear much smaller than these expanded scale charts. Values for the tested DIMMs at each speed are included below each chart for reference.

To evaluate memory bandwidth SiSoft Sandra 2007 Professional was used to provide a closer look at scaling for fast DDR2 memory. 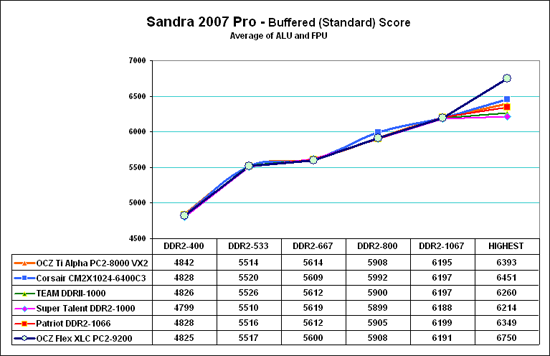 The most widely reported Sandra score is the Standard or Buffered memory score. This benchmark takes into account the buffering schemes like MMX, SSE, SSE2, SSE3, and other buffering tools that are used to improve memory performance. The Buffered benchmark does not correlate well with real performance differences in games, so our memory bandwidth tests have always included an Unbuffered Sandra memory score. The Unbuffered result turns off the buffering schemes, and we have found the differences in Unbuffered results correlate well with real-world performance differences. 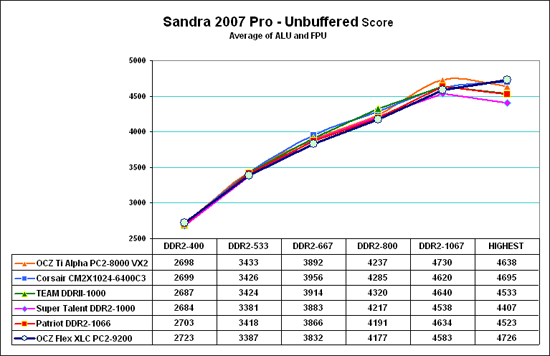 In both Buffered and Unbuffered tests we see the OCZ Flex XLC mirrors the best memory tested to DDR2-1066. This is exactly what would be expected since the Flex XLC is based on the same core memory chip as the other tested memories. Memory bandwidth increases dramatically at the top in buffered bandwidth (standard test). This is mostly a result of the much higher overclock in memory that could be achieved with the OCZ PC2-9200 Flex XLC compared to other Micron D-based memory. Unbuffered results also increase at the top speed, but not as dramatically as buffered results. This is also the expected result.

We also compared results with Version 1.5 of Super Pi - comparing the time to calculate 2 million places of Pi at the different memory speeds. This benchmark measures pure number crunching. 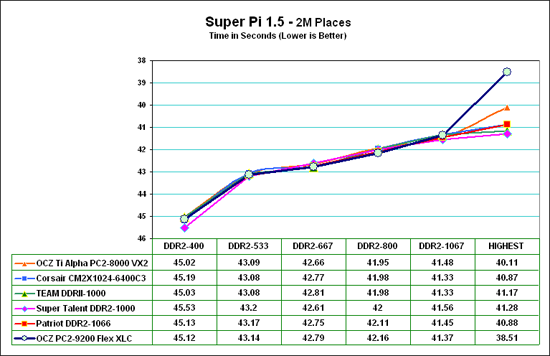 Super Pi results continue to improve all the way to the highest speed that could be reached with stability with each memory. The second result that stands out is how close the results with all the memories really are from DDR2-400 to DDR2-1066. This is mainly a reflection of the fact that compared memories are based on the same base Micron memory chips. At the highest speed Flex XLC pulls away from the pack with the record DDR2-1172 overclock. However, the 1172 top speed at stock 2.93 GHz is very close to DDR2-1067 results. These two results show the impact of CPU speed on calculation performance is much greater than the impact of memory speed increases.