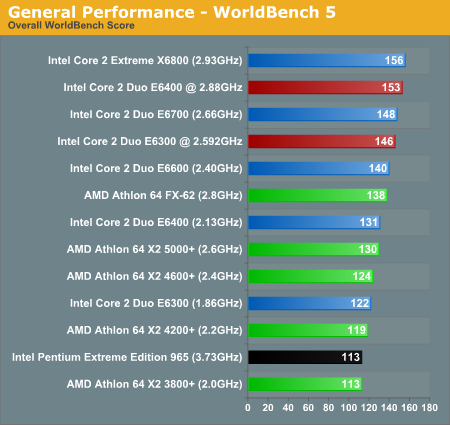 Switching over to WorldBench 5, all of the scores become much closer. The spread between the fastest and slowest tested processor is only 38%, and overclocking of the E6300 and E6400 by 39% and 35% results in a 20% and 17% performance increase, respectively. Given the number of applications being tested in WorldBench 5, the overall results are not too surprising. Some tests are CPU limited while others are bottlenecked by hard drive performance. Athlon 64 X2 is more competitive in this benchmark, and the truth is that any of these systems would be more than fast enough for typical home/office use. If you want the fastest current CPU architecture, however, that title clearly belongs to Intel's Core 2.