At Steve Jobs' WWDC 2005 Keynote, he presented this slide to the curious crowd: 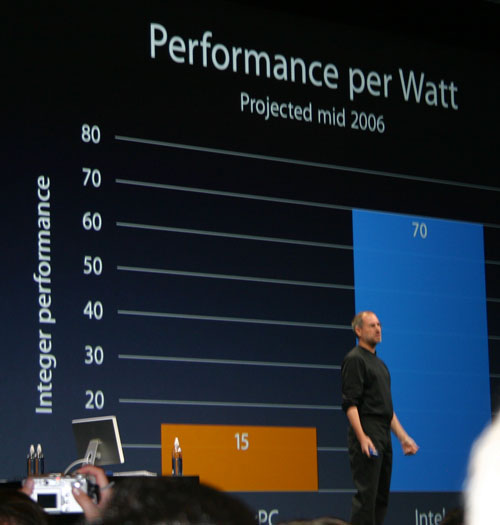 The idea was that IBM couldn't deliver the performance per watt that Intel could over the coming years, and that was one of the primary reasons for the transition away from the PowerPC architecture.

While we can't test future IBM and Intel CPUs, we can definitely compare power consumption and performance per watt today and find out if Intel can at least start delivering on Apple's claims.

I started out by looking at power consumption of the iMac systems as a whole, measured at the power outlet in Watts. The systems are configured as close to identical as possible; although the Core Duo iMac has a slight advantage in its 90nm X1600 GPU compared to the iMac G5's 0.13-micron X600 GPU, I didn't focus on any GPU intensive tests so the difference should be minimized. There are obvious memory differences as well. While both systems have 512MB of memory, the Intel system uses DDR2-667 and the G5 system uses DDR2-533. Then there are the CPU and chipset differences, but those are the ones that we want to measure anyways, so they have to be there.

The first comparison is system power consumption at idle. This is with both identically configured systems being freshly booted and sitting on the desktop with no disk accesses or anything. Note that the systems weren't left alone long enough for the hard drive to spin down yet:

The Intel based iMac consumes about 2/3 of the power of the iMac G5 - impressive and pretty much expected given what we've seen of the Core Duo in the past. The G5 is a solid competitor here, but the Core Duo is in a completely different league of power consumption.

I also looked at power consumption during my H.264 encode test, which produced results similar to the iTunes encoding test above:


The iMac Core Solo 1.83GHz was simulated by disabling one of the Core Duo's cores

The end result is this graph of Frames per Second/Watt:


The iMac Core Solo 1.83GHz was simulated by disabling one of the Core Duo's cores

We are only talking about system power usage here, so if we were to truly isolate just the CPU power, the difference should be even larger, assuming that the rest of the systems consume a relatively equal amount of power in both configurations. You should also keep in mind that the Quicktime encode test is actually one of the Core Duo's weakest tests, so the actual performance per watt advantage may be even higher in tests where the Core Duo has a larger performance advantage over the G5. This is just a good test to show power consumption, since it is fairly CPU bound and consistent in its CPU load.