by Jason Clark & Ross Whitehead on December 16, 2005 12:05 AM EST
67 Comments | Add A Comment
67 Comments
More processing power has long been the focus of the processor giants, but times are changing. Performance per Watt is the focus for both AMD & Intel for the foreseeable future.

In October of this year, Intel invited AnandTech to its Jones Farm Campus in Portland Oregon. The purpose of the visit was to get a detailed overview of their roadmap for the next year, and to take a close look at the Bensley platform. Bensley is the code name for Intel's new Xeon platform, which will support both Dempsey and Woodcrest processors and a new chipset, code-named Blackford. Demspey is going to take us well into Q2 of next year, and Woodcrest will appear sometime in the second half of next year. Woodcrest will be a lower wattage part that is focused on performance per Watt.

Dempsey is the processor that we're going to take a look at in this article. What we'll be showing benchmarks on is a pre-production Bensley platform. Performance may differ once the platform reaches production status. The key features of Dempsey are: dual-core support, 65nm fabrication and an Independent L2 2MB Cache (2x2MB). Intel will release three variations of the Dempsey processor: a 1066 MHz FSB (130W) version that is the "Performance" version, a 1066 MHz FSB (95W) version that is a rack-optimized part (perf/power for rack density) and a 667 MHz FSB (95W) value version.

The Blackford chipset is all new for Xeon, and addresses one of the main bottlenecks that we've seen in previous Xeon chipsets, front side-bus. Blackford uses a dual independent bus architecture operating at 1066MHz. Memory is now FBD-DDR2 (Fully Buffered DIMM) running at 533MHz, which offers up to 17GB/s of memory bandwidth. 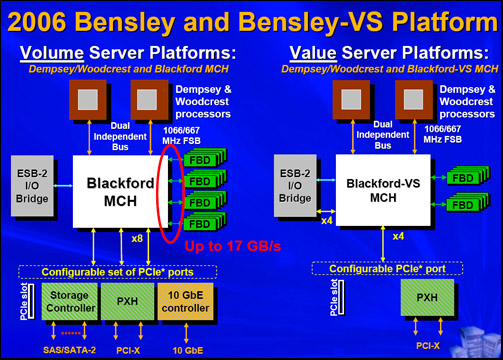 The future is performance per Watt.
Tweet
PRINT THIS ARTICLE
Comments Locked