Google’s newest Pixel 6 and 6 Pro are definitely most interesting devices, as in many ways they represent Google most competitive and value-rich phones the company has been able to make in years. While today’s article isn’t focusing on the device itself – more on that in a later review, including more in-depth camera coverage, what we did have a deeper look today was at the new chip powering the phones, the new Google Tensor.

The company notes that the primary reason they saw the need to go with a customized silicon approach, was that current merchant silicon solutions didn’t allow for the performance and efficiency for machine learning tasks that the company was aiming for in their devices. This performance and efficiency is used to enable new use-cases and experiences, such as the many ML features we see shipped and demonstrated in the Pixel 6 series, such live transcribing, live translation, and image processing tricks, all that run on the Tensor’s TPU.

While Google doesn’t appear to want to talk about it, the chip very clearly has provenance as a collaboration between Google and Samsung, and has a large amount of its roots in Samsung Exynos SoC architectures. While yes, it’s a customised design based on Google’s blueprints, the foundation means that some of the defining characteristics of Exynos chips is still found on the Tensor, particularly power efficiency is one area of the SoCs that are very much alike in, and that also means that the Tensor falls behind, much like the Exynos, against Qualcomm’s Snapdragon solutions when it comes to battery life or efficiency.

Google’s CPU setup is a bit different than other SoCs out there – a 2+2+4 setup with X1 cores, A76 cores and A55 cores is unusual. The two X1 cores are fine, and generally they end up where we expected them, even if there’s a few quirks. The A76 cores, ever since we heard those rumours months ago that the chip would feature them, made no sense to us, and even with the chip in our hands now, they still don’t make any sense, as they clearly fall behind the competition in both performance and efficiency. Who knows what the design process looked like, but it’s just one aspect of the chip that doesn’t work well.

GPU performance of the Tensor seems also lacklustre – while it’s hard to pinpoint wrong-doings to the actual SoC here, Google’s choice of going with a giant GPU doesn’t end up with practical advantages in gaming, as the phones themselves have quite bad thermal solutions for the chip, not able to properly dissipate the heat from the chip to the full body of the phones. Maybe Google makes more use of the GPU for burst compute workloads, but so far those were hard to identify. 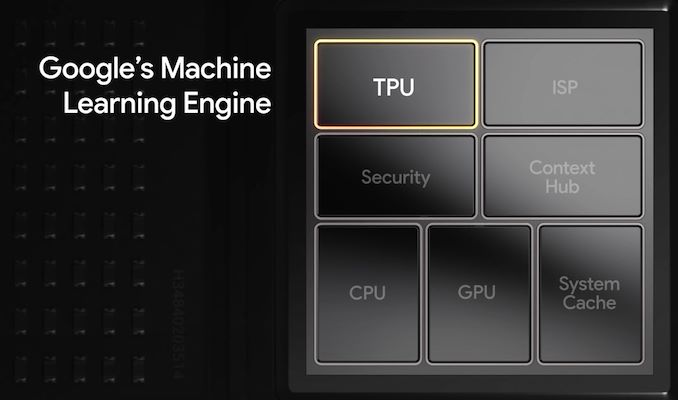 So that leads us back to the core aspect of the Tensor, the TPU. It’s the one area where the SoC does shine, and very clearly has large performance, and likely also efficiency advantages over the competition. The metrics here are extremely hard to quantify, and one does pose the question if the use-cases and features the Pixel 6 comes with were really impossible to achieve, on say a Snapdragon chip. At least natural language processing seems to be Google’s and the Tensor’s forte, where it does have an inarguably large lead.

One further aspect that isn’t discussed as much is not related to the performance of the chip, but rather the supply chain side of things. We of course have no idea what Google’s deal with Samsung looks like, however both new Pixel 6 phones are devices that seemingly are priced much more aggressively than anything we’ve seen before from the company. If this is related to the SoC bill of materials is just pure speculation, but it is a possibility in my mind.

In general, I do think Google has achieved its goals with the Tensor SoC. The one thing it promises to do, it does indeed do quite well, and while the other aspects of the chip aren’t fantastic, they’re not outright deal-breakers either. I still think energy efficiency and battery life are goals of highest priority in a design, and there we just absolutely need to see better improvements in the next generation Tensor. We don’t know what path Google is taking for future designs, but it’ll be interesting to see.

We’ll be following up with a more in-depth review of the actual Pixel 6 phones, starting with a camera-focused article – stay tuned.