Two of the most significant growth parts of my life have come around extracting as much performance out of a piece of hardware as possible. When I sat doing my PhD, in the lab, pumping out CUDA code to run through simulations in minutes instead of months, the onus was on speed – the more you could simulate in a day, the more insights you could get. As an extreme overclocker, it was pushing the silicon to its absolute limit, even if only for a few minutes, that yielded success and tasted triumph.

Today, as an editor, a technology analyst, and a journalist, the core of ‘getting work done’ is longer contingent on the highest performance computing – it’s about how carefully I can test, how I can manage relationships with vendors and experts, and then what content I can create (at least in a written sense here at AnandTech). The only ‘performance’ aspect to my work is how many systems I can test in a given time, and that is usually more limited by space, hardware, or other projects needing attention. Despite this, that desire for fast computing has never gone away. No matter if I’m dealing with laptop responsiveness, or distributing files over the network, having access to performance makes things easier (or at least if they’re wrong, I can identify a mistake faster!). 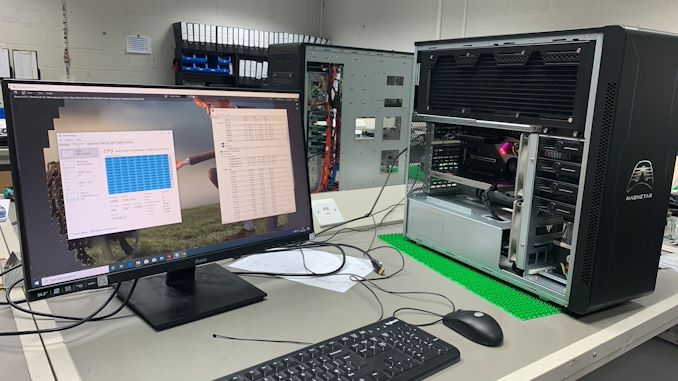 For a number of commercial verticals that demand high performance, the nature of that performance can directly affect throughput. Whether it’s something like rapid prototyping, or 3D/visual effects, or animation rendering, or medical imaging and processing, or scientific simulations, it’s all a question of throughput and data. This is the market Armari is targeting with the Magnetar X64T.

In our testing, much with the regular non-overclocked Threadripper 3990X, what the Magnetar X64T does well on it does *really* well. The system has been calibrated to handle integer and floating point workloads around that 4.0 GHz all-core frequency, and our thermal/audio analysis shows it to be easily more than suitable for the workstation market it is going into. The cherry on the top is in getting that SPECworkstation 3 world record, beating the high profile OEMs with a nicely built system.

Not only that, but the price is really impressive. Our system came with a Quadro RTX 6000, 256 GB of DDR4, 3TB of PCIe 4.0 storage, a custom 1600W 80PLUS Gold power supply, a custom chassis, and a three year warranty: for $14200 (pre-tax). Just the Threadripper 3990X and the Quadro RTX 6000 together are a base $8000. Add in the other hardware, the custom liquid cooling setup with a custom block and the TRX40 motherboard and 256 GB of high speed memory, with a 3 year warranty and a free checkup/coolant refill, and I suspect the big OEMs will be hard pressed to match the price. Not only that, the equivalent Intel system, using dual 28-core parts, starts easily costing $20k+ before even looking at memory or graphics. 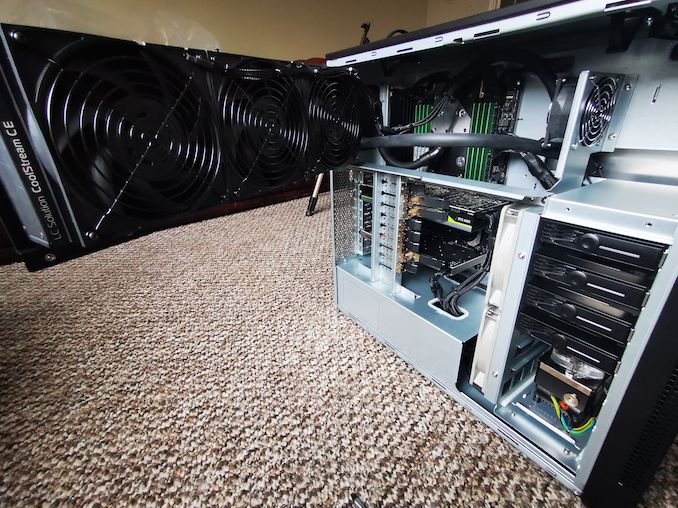 There are some negative things to highlight, however. For a system that encourages the CPU to draw around twice the power (or more), performance gains for our tests are more in the 30-35% range. The side-effect of overclocking a CPU is that the power efficiency is lower as the processor moves more out of its ideal efficiency range. However one might argue that to match the performance with other hardware requires multiple systems, which has more power draw. Another element will be that this system is limited to 256 GB of non-ECC memory; this is an AMD limitation rather than an Armari limitation, but some of Armari’s customers will no-doubt want similar performance but more memory, and probably ECC memory. And to that end, we also get to a potential performance bottleneck – having 64 cores and 128 threads working at this high speed needs a lot of memory bandwidth. Threadripper can only support 4 channels, and at DDR4-3200 that equates to ~100 GB/s (80-85 GB/s real world), leaving less than 2 GB/s per core. In a number of our tests, we saw this to be a limiting factor.

Something like AMD's Threadripper Pro solves most of these - more memory support, ECC support, eight memory channels. However the overclocking ability would be lost, which for a system like this where the OC performance is what makes it special, removing it would be the equivalent of ripping out its soul. Ideally AMD would need a product that pairs the 8-channel + ECC support with a processor overclock.

All that being said, Armari believes it has built something that its typical customer base will love. It’s a custom super high-performing workstation with a substantial world-record that you can buy, and for the visual effects studios in London that need the horsepower, AMD and Armari has it on tap.

As a small aside, I wondered how well the X64T would do in the ‘extreme’ overclocking leaderboards, where hell fears the liquid nitrogen. The best score I obtained for Cinebench R20 was 31006, which would put it 16th on the all-time leaderboard across all R20 submissions ever – the only way to get a higher score with air or liquid cooling would be to use a dual EPYC server. For Cinebench R15, a score of 12406 gives position #12 in the all-time list. This is somewhat insane for a system someone can just buy.

Here’s a couple our Cinebench R20 runs, in under 15 seconds apiece.

The final question is how to get one (if you were interested). The Armari Magnetar X64T-RD1600G3/FWL is already available for UK and the EU. Armari is in discussions with resellers/distributors in the US, however the warranty arrangement is slightly different. Alongside the X64T, Armari is preparing a rack-mounted 2U version of the X64T with an IPMI-enabled motherboard to come out later in Q4 – something the larger VFX houses have requested en masse. This is set for global certification, and is pending a North American distributor.