As you know, the Mobility Radeon 9600 (code named M10) and Mobility Radeon 9600 Pro (also code named M10) are mobile versions of the desktop Radeon 9600 (RV350). Seeing as we have already gone over that graphic processor, we won’t bore you with the details (read more here). Recapping from our last mobile graphics preview, the Radeon 9600 (including both mobile version) are produced on a 0.13 micron process, incorporates some serious memory controller optimizations, a new version of Hyper-Z compression technology, and support for component output. Power specifications, according to ATI technical documents, notes that the Mobility Radeon 9600 runs at 1.0V, and consumes 0.5W in Windows idle. We have still not been able to track down the maximum power consumption specification. 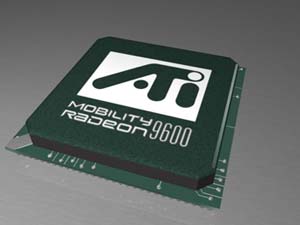