The GeForce4 GPU: Bursting at the Seams

This roundup will not feature regurgitated information from our GeForce4 review, instead we'll point you in that direction if you wish to learn more about the GPU and its performance relative to the competition. There are a few points that are relative to this roundup that we'll mention here in order to help you understand some trends we've been noticing in these cards.

For starters, the GeForce4 GPU is in fact bursting at its seams. The chip is quite expensive to manufacture on a 0.15-micron process and is in desperate need of a shrink down to TSMC's 0.13-micron manufacturing process. Unless NVIDIA decides to release an interim solution between now and this fall (which does have some likelihood of occurring given increasing competition from ATI and other next-gen GPUs being released this summer), the move to 0.13-micron will be made with the NV30. Because of the complex nature of the chip itself and the fact that it's being made on a 0.15-micron process we've noticed relatively little overclocking headroom in the GPUs themselves. In fact we get much better overclocks (percentage-wise) out of the memory on these cards than we do out of the GPUs themselves. Remember that the highest clocked GPUs (Ti 4600) are those that are picked out of the lowest-yielding bins and thus they have the least amount of overclocking potential. But since the GeForce4 is already so complex you shouldn't expect that the Ti 4400 GPUs will overclock just as well as the Ti 4600 parts, these speed bins are kept to very tight margins. We'll talk more about overclocking later in this roundup.

Next on the list of quirks to deal with is that the GeForce4 has no internal TMDS transmitters for DVI outputs. It is an extremely difficult task to integrate TMDS logic onto a GPU die and doing so requires a lot of engineering to insulate the high speed TMDS areas of the die from the rest. This is why you won't find any integrated TMDS transmitters on any of the large/high-speed GPUs. The lack of any integrated TMDS transmitters in the GeForce4 GPU puts the weight of providing DVI support on the shoulders of the card manufacturers. While all of the cards we tested feature at least one Silicon Image 164 transmitter capable of delivering enough bandwidth for a 1920 x 1080 resolution on a flat panel, there was only one card that featured two transmitters allowing for dual DVI outputs. All of the other cards simply provided a single DVI connector and a single analog VGA connector; in most cases a DVI-to-VGA adapter was provided to enable nView support for those that only have analog interface displays.

When the GeForce4 was first released Visiontek was the manufacturer with cards first in the retail channel. They managed to pull this off by following NVIDIA's reference design down to the smallest capacitor and inductor specifications and thus their Ti 4600 cards suffered from the same problem as the NVIDIA reference design. The problem we're speaking of isn't really a fault of NVIDIA or Visiontek, rather of some motherboard manufacturers and their lax adherence to AGP layout specifications. 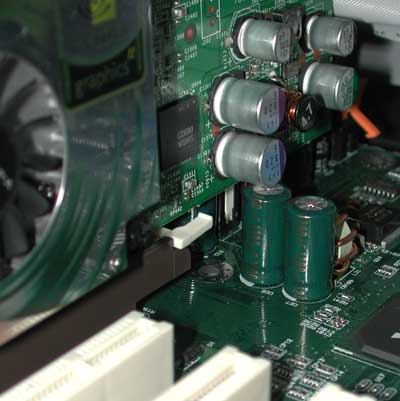 Our good friends at HardOCP.com first publicized the problem when some of their readers reported that the Visiontek Ti 4600 cards wouldn't physically install in EPoX 8KHA+ boards because of a capacitor on the motherboard that was too tall to clear a capacitor on the video card. 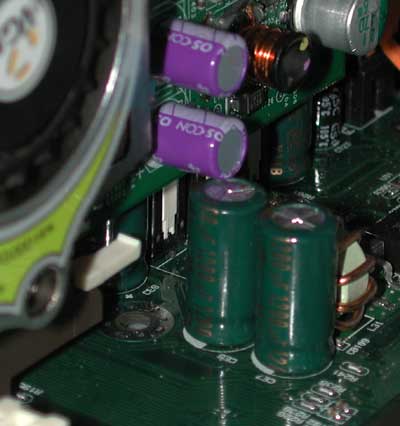 All other GeForce4 cards now use smaller capacitors in this location and thus fit fine.

It seems as if all of the other manufacturers have learned from Visiontek's unfortunate encounter and have designed their boards around EPoX's poor design by using a smaller capacitor in the offending location.

One of the biggest gripes that users in general have had with third party NVIDIA cards is that they often suffer from poor analog output quality. With the GeForce4 the RGB output voltages leading to the analog VGA output are held with much tighter margins, resulting in better output quality than any prior NVIDIA line. We're still working on a testing methodology to quantify this but if you're happy with the output quality on the Radeon 8500 you'll be fine with these GeForce4 cards.

In terms of what you should look for in a GeForce4 Ti card, once you have decided on the model you'd like (4400/4600) then the biggest consideration should be price. As we've seen in countless prior roundups, these cards will perform very close to one another and unless you're looking for specific VIVO (Video In/Video Out) features, you'll want to go with the card with the lowest price tag.