With the move to Haswell-E, the X99 platform changes to a more Haswell-like approach. Due to the use of the FIVR (Fully Integrated Voltage Regulator) on the processor, the motherboard only has to deal with the VCIN to the CPU and then tell the CPU what to do with those voltages. This, theoretically, makes the motherboard manufacturer job much easier in terms of design, but could also make it tricky when it comes to differentiating itself from the competition.

Several points need mentioning here relating to motherboard design. If you skipped over our analysis of ASUS’ overclocking socket earlier in the review it is worth a read, as ASUS is using a different socket design to help extend the range of extreme overclocking, although this might not matter much for 24/7 overclocking.

Next is the power consumption, or more appropriately, the current draw. Haswell-E draws a lot of current through the EPS 12V connector (the 8-pin near the socket), with up to 25 amps with a decent overclock and beyond under more extreme cooling. As a result, a sufficient power supply is needed to do this – typically anything with an 80 PLUS rating should be fine, although it makes sense to check. Also there has been some backlash against motherboard manufacturers placing only one EPS 12V 8-pin connector on some motherboards, with a certain section of users suggesting that motherboards with two of these connectors will fare better with high end overclocks. While this may sound preferable, each EPS 12V connector is rated up to 36 amps, so the only danger comes from spiking when the power supply has insufficient over-current protection.

In our Haswell-E CPU review, we explained that Haswell-E acts much like Haswell when it comes to overclocking – if it takes only one bad core out of four to reduce maximum overclocks in an i7-4770K, then having eight cores in one CPU raises the chances that one core might be the limiting factor. Our two CPU results showed 4.6 GHz on the good processor and 4.3 GHz on the poor one, although ASUS’ overclocking guides suggest that 4.6 GHz at 1.3 volts is actually a good processor, whereas anything below 4.4 GHz is below average.

The i7-5960X is cool at stock and peak load due to the low turbo modes not requiring much extra voltage. Power consumption is relatively slow to raise as well, however above the 4.0 GHz mark, voltages, temperatures and power consumption all start to rise quickly. This means that most CPUs should handle 4.0 GHz with ease, giving a nice 33% overclock. Intel recommends a good air cooler or their TS13X liquid cooler as the bare minimum for the 140W TDP.

For our overclocking tests, we measure the automatic overclock features of each motherboard as well as our standard manual overclocking procedure.

The X99-Deluxe has several modes of overclocking. The onboard TPU switch has two modes, one for multiplier only and the other for BCLK + Multiplier. The included software uses its 5-Way Optimization method to overclock the system, however it was not functional at the time of testing due to an error in our setup and our early sample.

Overall overclock performance of the ASUS X99-Deluxe comes top of the bunch, supporting 4.6 GHz within our absolute temperature window and 4.3 GHz very comfortably. 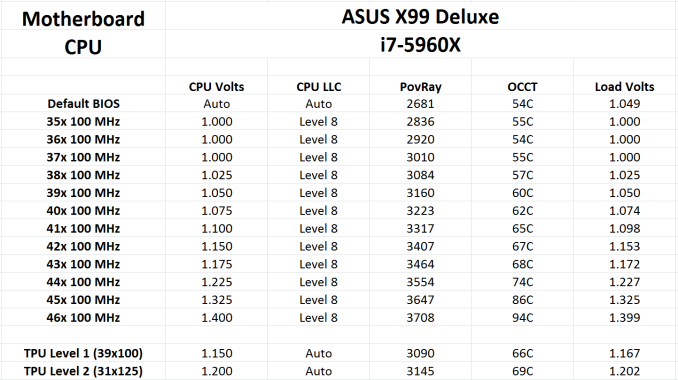 At 4.4 GHz we are still below 75C for our peak temperature readings and 4.3 GHz gives under 1.200 volts into the processor. It is hard to gauge if the OC socket is partially responsible for the ASUS scoring well compared to the rest.

GIGABYTE loves its overclocking. Having something like the GIGABYTE OC Lab, manned by their in-house overclockers HiCookie and Sofos, shows that they are willing to dedicate time, money and resources in that direction. So while the UD7 is not the primary target for extreme overclocking, because it sits at the top of the Ultra Durable line it needs to have something there to help it perform. This is why we get things like voltage read points and buttons on board to help with rebooting.

GIGABYTE’s ecosystem around easy overclocks for most users is via the software, giving options from Light to Extreme with Auto Tuning in the mix. With our 5960X, these all gave reasonable results and voltages up to 4.1 GHz. When it came to manual overclocking, our sample gave a good correlation from voltage applied to voltage read, although our 75ºC peak was lower than expected at 4.2 GHz: 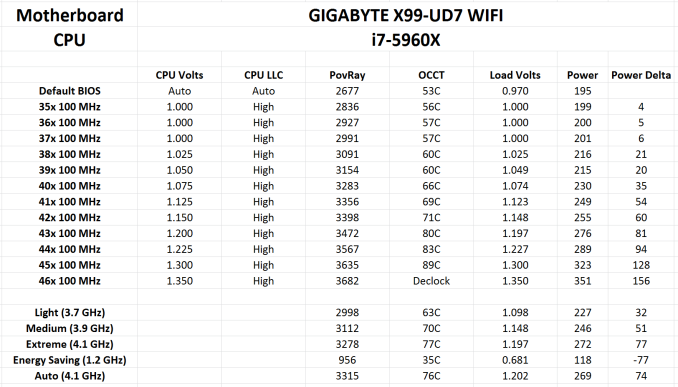 When the temperature gets too high, such as at 4.6 GHz and 1.350 volts, while the system is stable if we monitor the frequency it jumps below the 4.6 GHz mark on occasion. So at this point a non-voltage limited CPU in the UD7 ideally needs plenty of cooling.

While a Workstation class motherboard might not necessarily be geared towards overclocking in terms of OC-specific buttons or software, the nature of the components should be towards a higher stability, offering some amount of headroom for those versed in pushing frequency limits. The ASRock ecosystem offers a number of automatic overclock options in the BIOS and with the A-Tuning software, and the new layout in the BIOS for manual overclock settings, while easier to follow than before, does require a few more keypresses to go in and out of menus. Results from the ASRock are as follows: 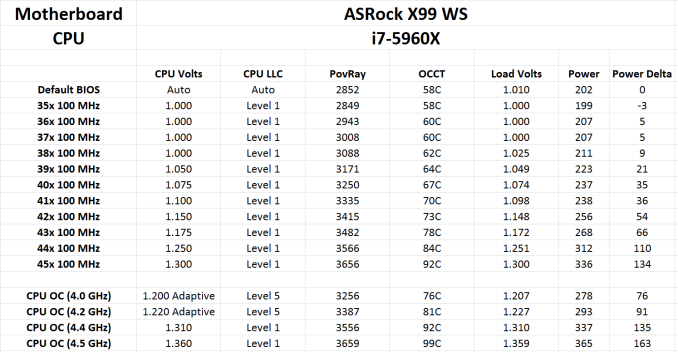 The automatic options are fairly aggressive with our average CPU sample, as given by the +0.060 volts at the 4.5 GHz level affording a power delta of +163W over stock. The 99ºC temperature is quite high as well, indicating that we are perhaps temperature limited overall. Note that if we draw a 75ºC line as a suitable peak temperature, none of the automatic settings fall under this, and it gives 4.2 GHz during manual testing.

The X99S SLI Plus is not being marketed specifically as an overclocking oriented motherboard, although the press materials mention the OC engine to ease transitions from one CPU strap to another. The X99S SLI Plus is a motherboard designed to get up and go with a flick of the OC Genie button. Given the $230 nature of this board, it seems to be primarily aimed at i7-5820K users, however many of these will want to overclock as well. Our results are as follows: 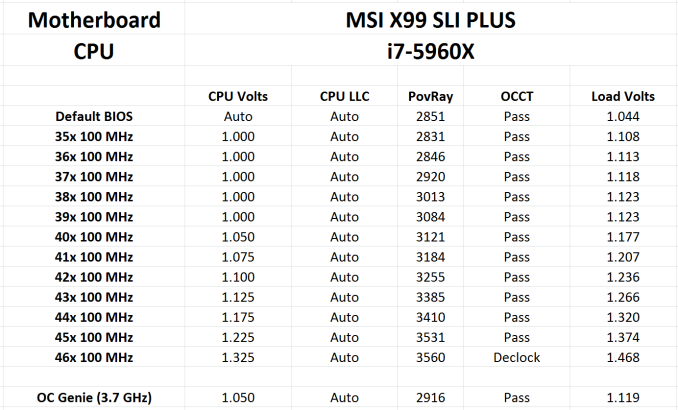 Several things are quite noteworthy. Firstly, the OC Genie setting is very mild. Every CPU under the sun should be managing 4.1 or 4.2 GHz, and MSI has played it safe going with 3.7 GHz.

Next up is the Load Line Calibration, which we had to leave on auto because the option in the BIOS after several generations still does not make it clear what it should be set as. Here there is a large disconnect between setting the CPU voltage and what the voltage reading is, to the point where at 4.5 GHz, 1.225 volts in the BIOS gives 1.374 volts at load – a +0.150 jump.

Finally, it comes to performance. When we put the overclocking results of the MSI up against any of the others, at each point the MSI result is behind: 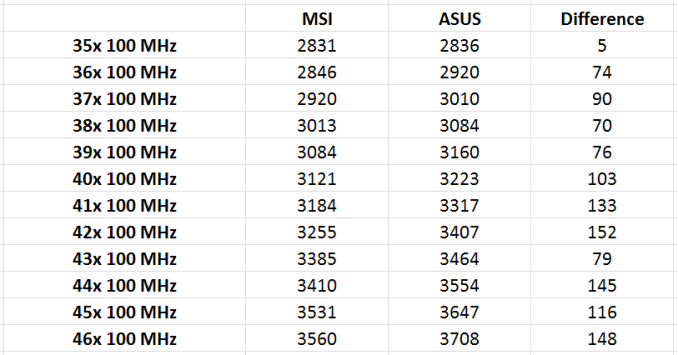 This is quite odd. It would seem the efficiency of the MSI motherboard when overclocked is somehow stunted to the point where the ASUS board at 4200 MHz can match the MSI at 4400 MHz. I am unsure if this can be fixed with a BIOS update, or if there is something fundamentally wrong with the MSI when overclocked, because its stock performance is actually rather good.