Consumer motherboards hide a lot of options that do not make sense to regular users. There is also the concept of that while a setting exists, anything other than the manufacturers recommended setting is ill-advised. In the server space this does not happen. Almost everything is available to the server administrator, whether he understands it or not. As a result, a motherboard BIOS can be almost all gobbledegook.

As mentioned in previous server motherboard reviews, while a company might release both server and channel products, internally these two teams act almost wholly independently. There is little crossover to speak of, and only when the firm’s brand is the topic will they meet. This might come across as an over-exaggeration, but it is almost two different companies working in the same building, with different engineering staff, different BIOS teams and different FAEs. As a result, there can often be a lack of consistency between platforms. The prime example is usually the BIOS, where the server team have not adopted the graphical BIOS layouts of the channel-facing business. We see this with the C2750D4I, where ASRock Rack (the server department in ASRock) is using an older American Megatrends layout. 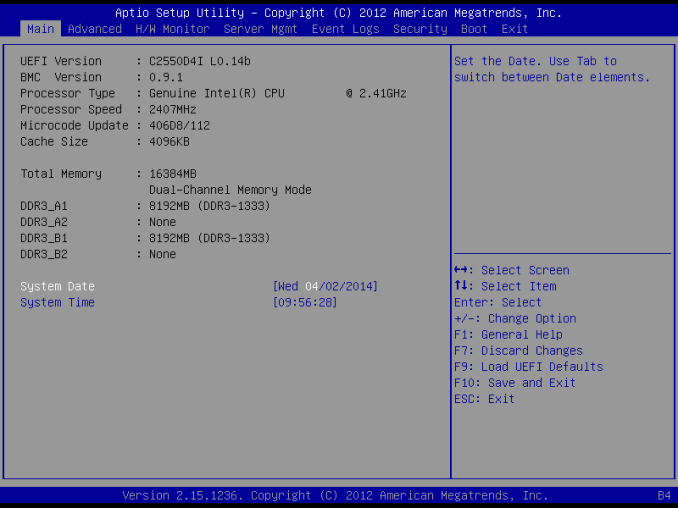 The first screen of the BIOS shows the Motherboard name and BIOS version, the CPU installed, its speed, the total memory and how that memory is distributed. In a full graphical BIOS I would expect other data such as the CPU temperature, CPU voltage and fan speeds.

The advanced menu houses all the configuration elements of the system, and as I mentioned above this is where a mass of options can confuse. Aside from the normal features a channel motherboard user is used to (USB configuration, SATA configuration), we can adjust things like ‘Root Ports De-emphasis’: 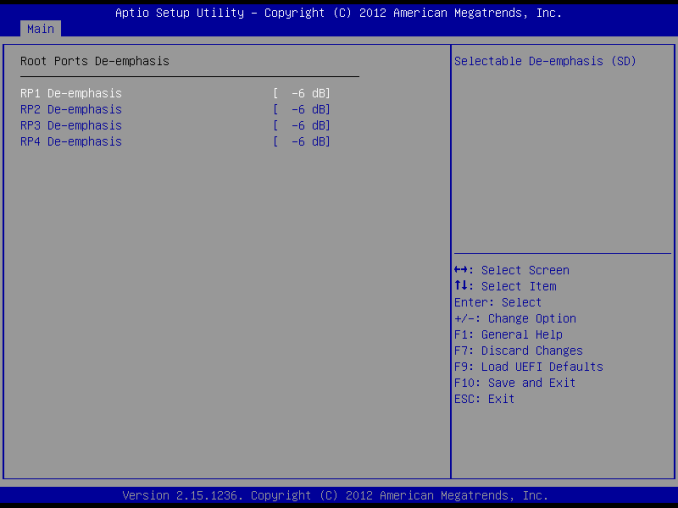 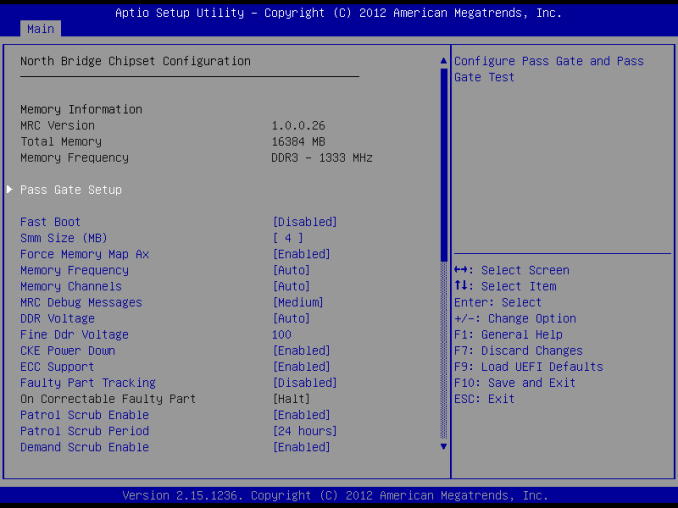 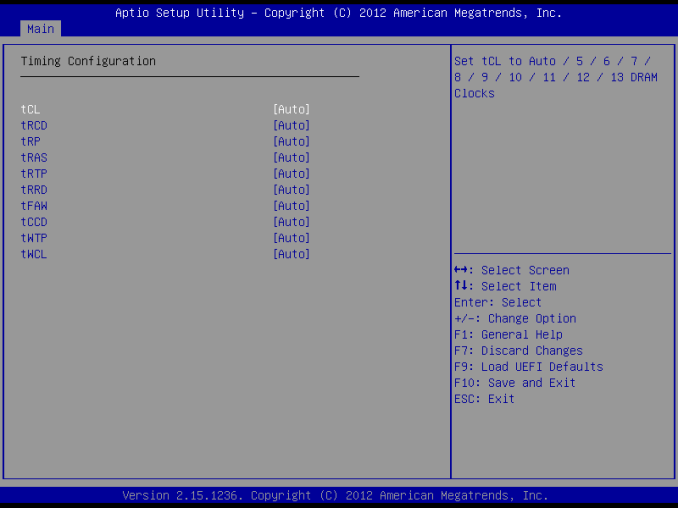 There is no XMP setting, but the system does offer ‘Auto’ for the subtimings so if one is changed the user should not need to compensate with the others. Ideally I would like the BIOS to detect the default setting for the DRAM installed and show this value next to the timing configuration options.

By default, the C2750D4I has all sleep states disabled in the BIOS: 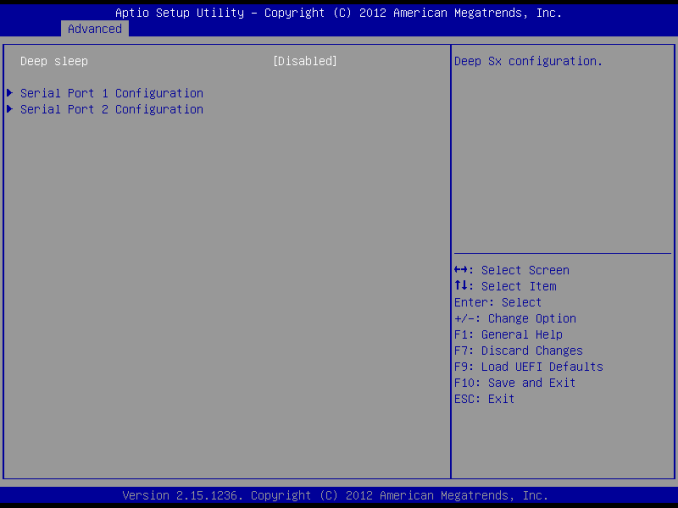 Thus in order to activate S3/S4/S5 in the OS, this needs to be enabled.

To answer a specific point raised in our last server motherboard review, the C2740D4I does have an option to enable Above 4G Decoding. This is set to disabled by default. 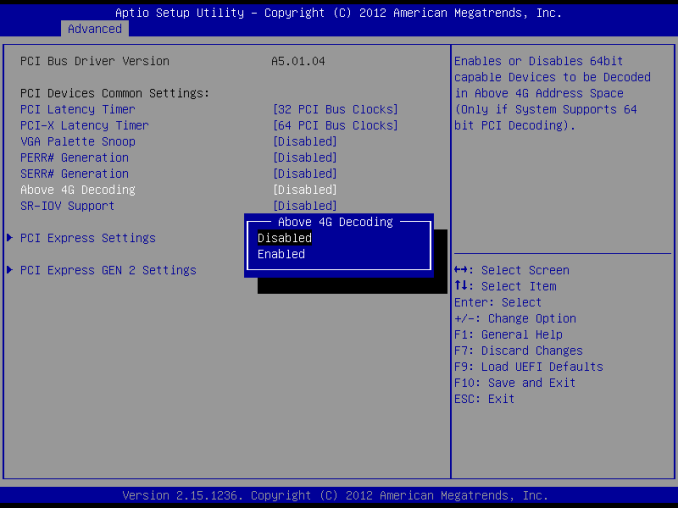 Because this BIOS is a UEFI, the fast boot options for Windows 8 users are in the CSM menu under the Advanced tab: 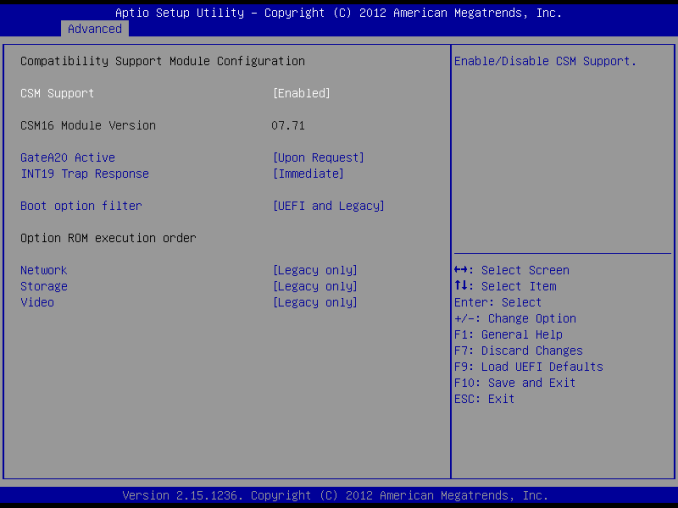 The server management software has access to all the sensors on the motherboard, and so does the BIOS in the H/W Monitor tab. Here are also the fan controls, offering users a SmartFan option or Level 1-9 that gives increasing fan speed gradients. By default all fans are set to 100% which is ideal for a server environment but perhaps not inside a case.

The BIOS also offers basic event logs, although for more detail the IPMI should be used. One feature missing from the BIOS is a boot override function, although users can rearrange the boot order.

Another feature missing from the BIOS is the ability to update through the BIOS itself. Users will either have to install an OS and update, or create a DOS-bootable USB stick and run the commands through that.

Like many of our server motherboard reviews, the C2750D4I comes up a little short compared to what channel consumers are used to. This is in part due to the lack of cross-collaboration between server and channel (I would hazard a guess that parts of the channel software package can be bought over), but also the nature of server usage scenarios. For virtualization, motherboard software is not needed, and for headless/command-line boxes there might not be any need for OS interaction (especially not Windows). Perhaps in the workstation use scenario it would make more sense, or if a user was planning to use the C2750 as a NAS/HTPC combination.

As a result our software is limited to the Marvell RAID utility, due to the use of Marvell controllers, and the management platform.

We have come across this utility on the consumer motherboard side when Marvell controllers have been used. During parts of Z68 and Z77 these were favored either due to cost or functionality variation. The utility allows the user to build RAID 0/1 devices using the Marvell controllers, as well as look at adapter specifications: 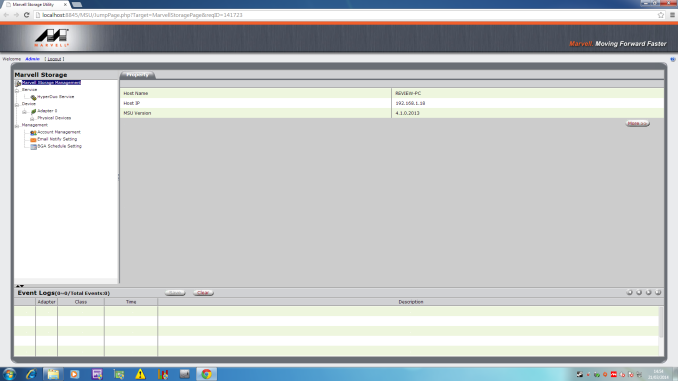 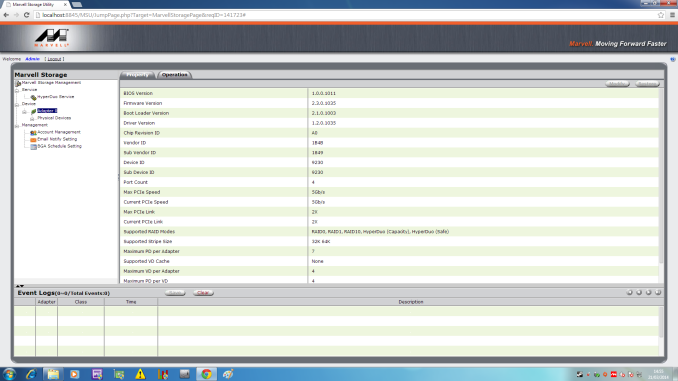 Using the Aspeed AST2300 via the network interface, ASRock has a slightly skinned version of the American Megatrends IPMI interface (with iKVM support). After login the user has an initial management screen that gives all the sensor readings, a breakdown of types of event log and an option to access the Java based remote control platform.

Unfortunately this screen had issues with browser resizing, and thus only a full screen gave the details in a single screenshot: 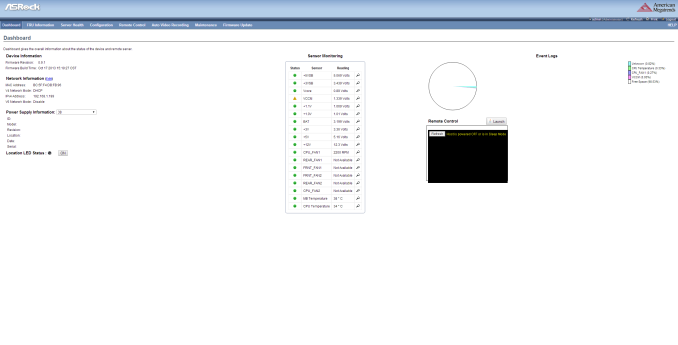 Unfortunately the Java applet does not have the appropriate security clearance for the latest update of Java, and users will have to enable unsecure apps in the options in order to get it to work in full access mode. The alert screen that popped up while we were testing suggested that in future updates of Java this sort of applet will be blocked completely.

We selected a few options in this interface to examine, including the sensor readings log: 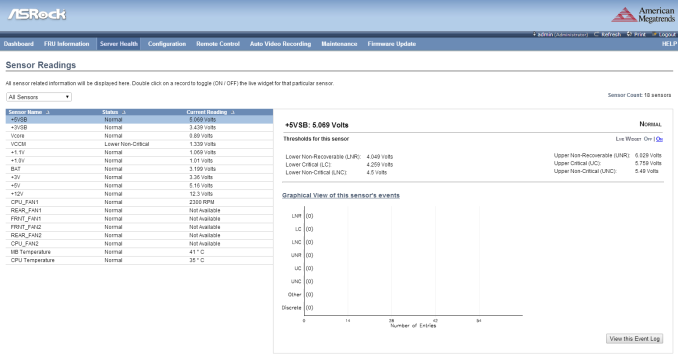 When one of the sensors hits the non-critical, critical or non-recoverable value (either high or low), this log will collate those entries to show the frequency at which they occur. Users can navigate to the event log itself to determine at what time these messages occurred. 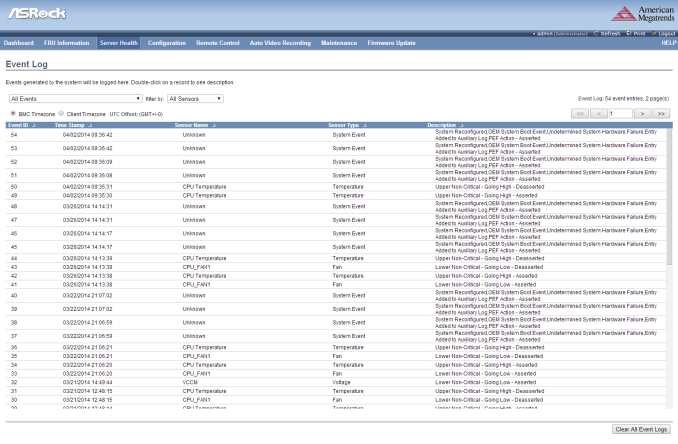 One of the things I like about a server management tool is the ability to remote shutdown or turn on a system. The C2750D4I also has this in the Remote Control section. 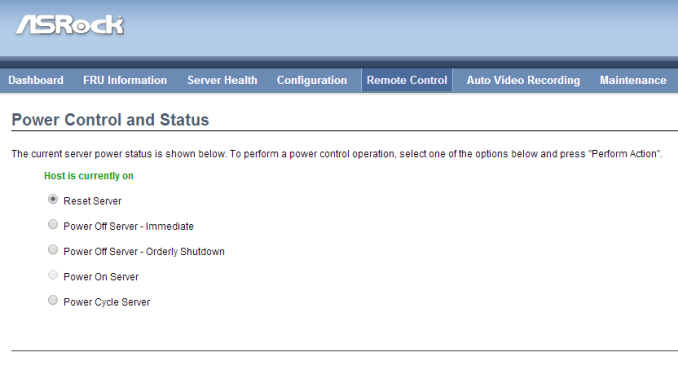 The interface also offers a video recording tool that will activate if one of the sensors is triggered. This tool will record the visual output of the display and save it to the device in the specified directory so users can debug what caused the sensor issue.

The interface also keeps a list of running services through the BMC: