Back in 2011 (which seems like so long ago now!), we introduced our AnandTech Storage Bench, a suite of benchmarks that took traces of real OS/application usage and played them back in a repeatable manner. The MOASB, officially called AnandTech Storage Bench 2011 - Heavy Workload, mainly focuses on peak IO performance and basic garbage collection routines. There is a lot of downloading and application installing that happens during the course of this test. Our thinking was that it's during application installs, file copies, downloading and multitasking with all of this that you can really notice performance differences between drives.

We tried to cover as many bases as possible with the software incorporated into this test. There's a lot of photo editing in Photoshop, HTML editing in Dreamweaver, web browsing, game playing/level loading (Starcraft II & WoW are both a part of the test) as well as general use stuff (application installing, virus scanning). We've included a large amount of email downloading, document creation and editing as well. To top it all off we even use Visual Studio 2008 to build Chromium during the test.

Only 42% of all operations are sequential, the rest range from pseudo to fully random (with most falling in the pseudo-random category). Average queue depth is 4.625 IOs, with 59% of operations taking place in an IO queue of 1. The full description of the test can be found here. 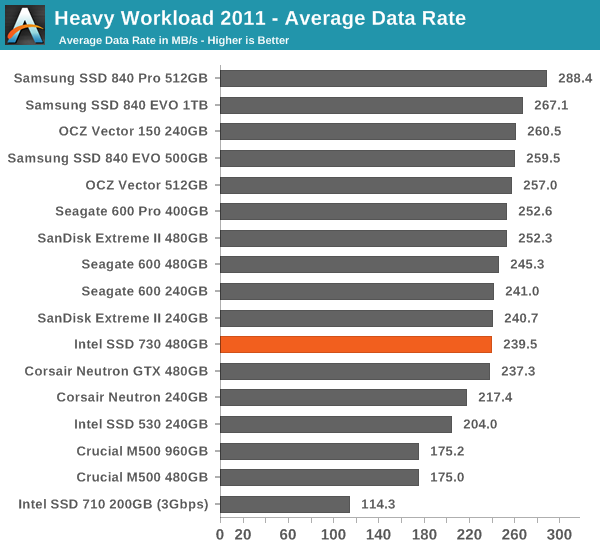 Our light workload actually has more write operations than read operations. The split is as follows: 372,630 reads and 459,709 writes. The relatively close read/write ratio does better mimic a typical light workload (although even lighter workloads would be far more read centric). There's lots of web browsing, photo editing (but with a greater focus on photo consumption), video playback as well as some application installs and gaming.

The I/O breakdown is similar to the heavy workload at small IOs, however you'll notice that there are far fewer large IO transfers. 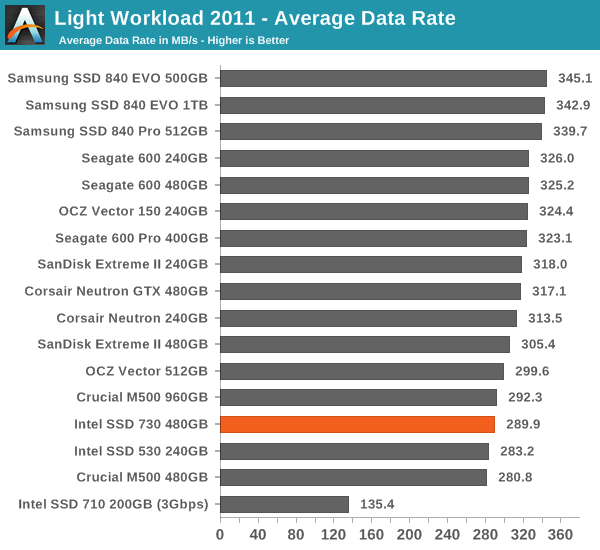 Again, the SSD 730 comes up with relatively uninspiring performance in this lighter, older workload. If your usage patterns are relatively tame, a drive designed for enterprise usage scenarios may be more than you need and may actually end up performing slower than "lesser" drives in day-to-day use—not that you'd likely notice, as most decent SSDs are now at the point where to normal users they're all plenty fast.