The cadence for camera on the Note platform has been pretty steady so far, it just inherits the camera module from the Galaxy S that came before it. In the case of the Note 3, that means the same module from Galaxy S 4, which is as far as I can tell what happened here. There’s an IMX135 sensor inside the Note 3, same as what shipped in GT-I9500, from Sony’s Exmor RS line. Specifically that means the Note 3 includes a 13 MP CMOS on the back with 1.12µm size pixels and a 1/3.06" optical format. Focal length changes slightly from 4.2 to 4.1 mm, but I’m not sure if this is just a rounding error, I suspect the same optical system is shared between the two, this works out to 31mm of focal length if you’re thinking 35mm equivalent numbers. 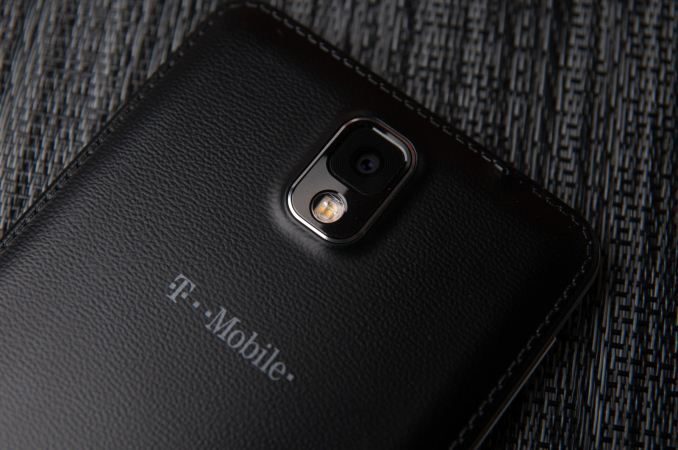 On the front is a 2 MP Samsung S5K6B2 CMOS with 1.34µm and 1/6" format. This is also shared with Galaxy S 4, which isn’t too surprising. So we have the same imaging on the back and the front as that flagship, with just different ISP in front of it with 8974.

The Note 3 looks good outside and obviously reminds me exactly of the Galaxy S 4 when it comes to imaging performance. I never really had issues with SGS4 outside or in well lit scenarios, the Note 3 ends up being just about the same. I can’t say there’s really any surprises when it comes to still images out of the device, although the Note 3 absolutely struggles with white balance in the lightbox for some reason, which is odd considering Galaxy S 4 definitely didn’t have similar problems. Anyhow if you liked SGS4 imaging performance, Note 3 is definitely the same, it doesn’t really change the formula in low light however against the competition that now has OIS and bigger pixels, but I won’t belabor that point again.

On the video side of the Note 3 we have an interesting new addition, 4k30 (or UHD) video record support, alongside both 1080p60 and 720p120. Higher framerate video has been an increasingly common thing lately, and the Note 3 supports this with the new video encode and decode capabilities of the 8974 SoC (Exynos 5420 doesn’t get any UHD video record features).

In the video recording UI you can select between the above video resolutions, at a framerate of 30 FPS. To get to 1080p60 you have to go under a different menu and select smooth motion, and 720p120 is under slow motion. 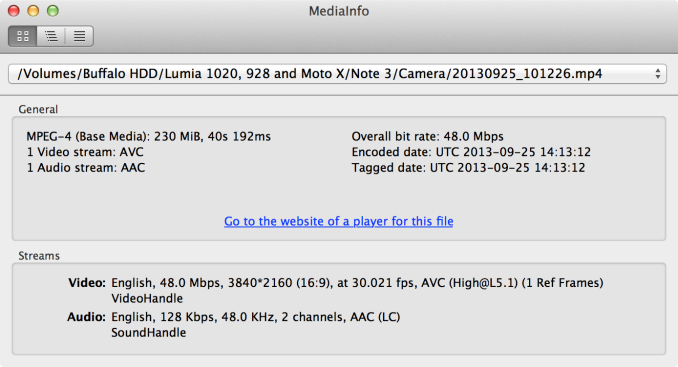 4k30 video gets recorded at 48 Mbps H.264 high profile with 1 reference frame, which will eat up space quickly but obviously blows things away with that much resolution, and 8974 doesn’t drop frames either. The 1080p60 video comes in at 28 Mbps H.264 high profile and also doesn’t seem to have any dropped frames. Audio in both cases is 128 kbps 48 kHz stereo AAC.

I uploaded two UHD samples to YouTube since it’s already 4K aware, if you select original quality from the switcher drop down. I don’t have a 4K display to view these on, but oversampled on the high resolution panels I do have it looks amazing. The 1080p60 content also looks great, although you’ll have to grab that one and view it on your own since YouTube (and really nowhere online I’m aware of) will show you 60p video at native framerate. I shot UHDp30 and 1080p30 videos in Times Square in NYC which you can grab, and UHDp30 and 1080p60 videos at the bench location which you can also grab if you want to look at that buttery smooth 60 FPS video.


I’m really impressed with video quality coming out of the Note 3, obviously having smartphones coming with UHD onboard is a big treat, and we now have smartphones beating other bigger standalone cameras to that punch.