The Fractal Design Define Mini may be a year old, but it's design feels like it's at least two or three, unfortunately. Certain conveniences we've come to appreciate in recent designs are absent, and Fractal Design hasn't shown any sign of learning about them in the intervening period between the Define Mini's launch and their most recent case, the Define XL R2.

Once again, no standoffs or studs are included to line up motherboard installation, so it's back to screwing in standoffs manually for you. A high end micro-ATX motherboard uses the same number of standoffs as a standard ATX board, so even the smaller form factor won't save you. For what it's worth, the motherboard lined up well, and the case headers were all long enough to connect with no problems.

Installing a 5.25" drive is basically toolless (and painless), but my review unit had the cables from the top I/O cluster hanging in the top bay. That meant a lot of struggling to get them routed the way they're supposed to; if they're not, you won't be able to fit an optical drive in here, and you'll run into the same idiotic problem the Nanoxia Deep Silence 1 unfortunately suffers from, where badly routed cables actually prevent you from using the bay. The installation itself required no latches or anything of the kind; Fractal Design includes special thumbscrews with smaller heads appropriate to the mounting holes of an optical drive.

3.5" and 2.5" drives require the use of a Phillips head screwdriver, but I'm mostly okay with it due to how sturdy and rigid the drive trays themselves are. You'll need the special screws included for the rubber grommets used to insulate the 3.5" drives from vibration; 2.5" drives just screw directly into the tray proper. 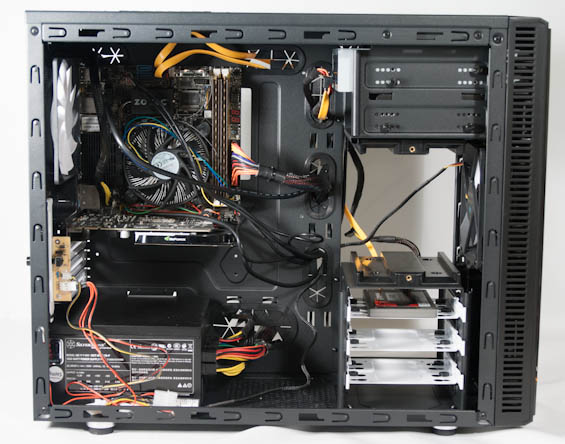 Mounting the power supply was a painless process, but expansion cards and the fan controller are a little more complicated. That owes almost entirely to the fan controller actually; if you use the extra expansion slot, it makes turning the thumbscrews for the primary four slots much more difficult, and that's ignoring the fact that I needed pliers for the fifth slot's thumbscrew anyhow. So if you're stupid enough to install the fan controller in the fifth slot first like I was (and keep in mind I needed pliers to get it comfortably secure), you just made life a lot harder on yourself. This is more advice to the end user and less a critique of Fractal Design, who were thoughtful enough to include that fifth slot in the first place. 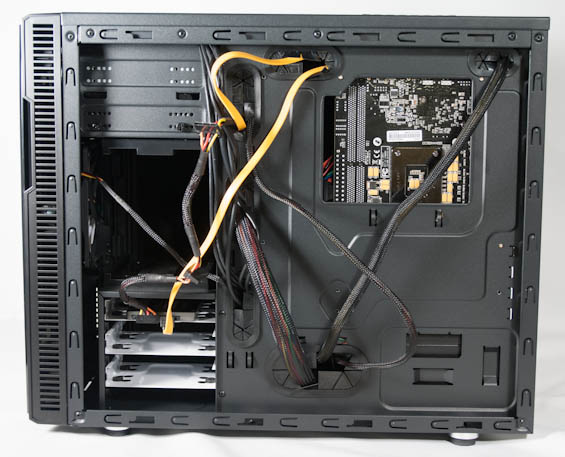 Things start to go a little off the rails when you get to cabling, though. Most of the routing holes are well placed and work perfectly, but that fan controller seriously hampers any attempts at a clean cabling job. It uses a molex connector, and all of its leads are too short to route behind the motherboard tray. The leads on the case fans themselves are also too short to route, so you'll have fan leads stretching across the interior of the case. I'm absolutely dire at cabling systems, but this just makes things worse. Space behind the motherboard tray is at a premium as well, making the rear panel difficult to replace.

The Fractal Design Define Mini is ultimately reasonably easy to build in, but it lacks modern conveniences, and things go haywire (no pun intended) when you start running the necessary leads. This isn't catastrophic by any measure, and the case as a whole is very sturdy, but it's further evidence of Fractal Design being just a breath behind Corsair and now NZXT in usability.