For SSDs to become more cost effective they need to implement higher density NAND, which is often at odds with performance, endurance or both. Samsung chose the endurance side of the equation, but kept performance largely intact with the vanilla 840. Given that most client workloads aren't write heavy, the tradeoff made a lot of sense. With the M500, Crucial came at the problem from the performance angle. Keep endurance the same, but sacrifice performance in order to hit the right cost target. In the long run I suspect it'll need to be a combination of both approaches, but for now that leaves us in a unique position with the M500.

The M500's performance is by no means bad, but it's definitely slower than the competition. Crucial targeted Samsung's SSD 840, but in most cases the TLC based 840 is faster than the M500. There's probably some room for improvement in the M500's firmware, but there's no escaping the fact that read, program and erase latencies are all higher as a result of the move to larger pages/blocks with the drive's 128Gbit NAND die. The benefit to all of this should be cost, but we'll have to wait and see just how competitive the smaller capacities of the M500 are on cost. 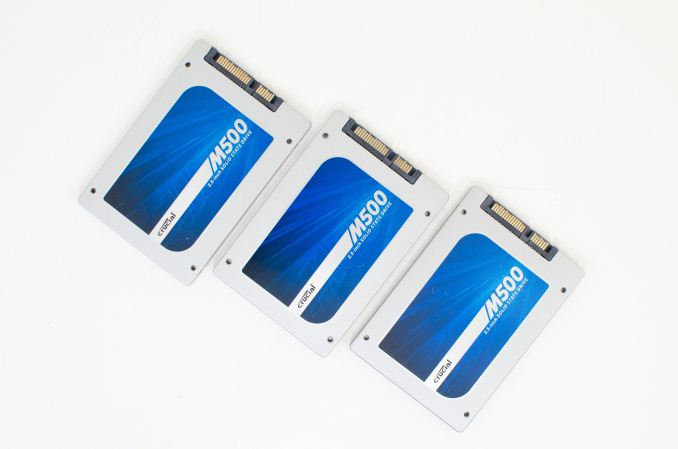 The saving grace when it comes to the M500's performance, at least compared to Samsung's offerings, is worst case IO consistency in a full drive state. If you have the luxury of keeping around 20% of your drive free, Samsung maintains its performance advantage. If, on the other hand, you plan on using almost all of your drive's capacity - the M500 does have better behavior than even the 840 Pro. It's an interesting tradeoff, but going forward I feel like we're going to have to start distinguishing between both usage models. The M500 definitely isn't the best when it comes to delivering both high performance and consistent IO, that title continues to belong to Corsair with its Link_A_Media based Neutron drive. But among the current crop of non-SandForce tier 1 SSD manufacturers, the M500 does reasonably well.

The encryption story on the M500 is potentially very interesting. Assuming the drive is indeed fully supported as a Windows 8 eDrive like Crucial claims, the M500 would be the obvious choice for anyone who had to run with BitLocker enabled. The prospect of seeing more SSDs with hardware encryption that can be leveraged by the OS is downright exciting. Honestly I wasn't aware of the eDrive spec until testing the M500, but now I want to see something similar from Apple as well.

Power consumption is another potentially good story from Crucial, assuming idle power in a notebook is truly as low as it claims. Power under load is competitive with Samsung's SSD 840 Pro, and actually even lower than the vanilla 840. Given that neither of those drives is particularly power hungry, the M500 does well there. Support for DevSleep is a nice addition. The combination of the M500's encryption support and DevSleep give us a good idea of two platform features that we should hope to see from all modern drives during this next generation. 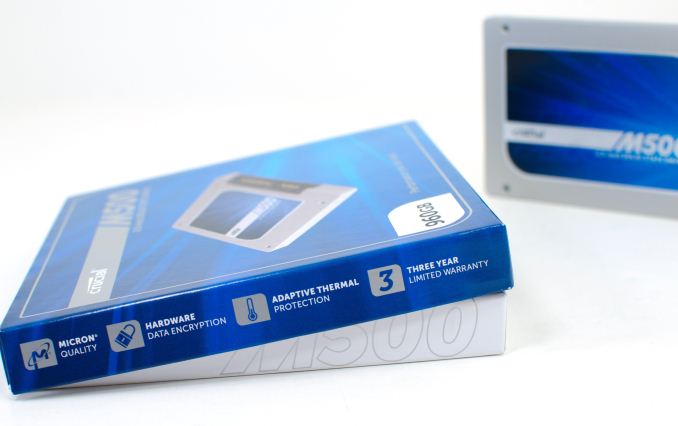 All of this brings us to recommendation time. The easiest of the M500 drives to recommend and dismiss are the highest and lowest capacity versions, respectively. The 960GB M500 is the cheapest 1TB-class SSD I've seen to date, and it's likely the best buy if you need that much storage in a single drive. Performance still falls short of the fastest drives in this space, but if you need the capacity and plan on using all of it the M500 is really the only game in town. I've been hammering on the 960GB very hard over the past few days and while it hasn't been long enough to clear the drive as reliable, so far it's handled everything I've thrown at it very well (including our new Destroyer benchmark). I know I've personally been waiting for a good, high-capacity SSD for notebook use and based on my options today, I'd have no issues going with the 960GB M500.

On the other side of the fence, the 120GB version sacrifices a lot of performance as a result of only using a total of 8 NAND die within the drive. Unless its street price is significantly more attractive than its MSRP, I don't see a reason to choose the 120GB M500.

Recommending the two middle capacities (240/480GB) will really depend on street pricing. Based on their MSRPs, the M500 doesn't appear to be any more competitive here. I suspect that we will see closer-to-840 pricing after a few weeks of being in the channel, at which point they may be worth another look. For now, we play the waiting game.