EVGA is a brand that is often synonymous with high end products and a loyal fan base.  With respect to motherboards, EVGA have produced some of the most creative and popular designs, especially in the X58 era with the EVGA SR-2, a dual socket motherboard for Xeon processors, and the X58 Classified.  With a wealth of overclocking knowledge, the EVGA brand has also produced world records in overclocking.

When it comes to the Z77 platform, despite overclocking on Ivy Bridge being not as cut and thrust as some older platforms, EVGA still use that knowledge to produce a board that users can overclock on.  As a result, we get some great overclocking options and a board that happily hits 4.7 GHz on our i7-3770K during testing in the Z77 FTW.

The main reason the EVGA Z77 FTW was included in this review is due to two factors – it comes in between the $280-$350 mark at $310, and also contains a vital PLX PEX 8747 chip, used for creating a wider range of PCIe lane opportunities than the standard Z77 chipset.  EVGA take a different approach than the other manufacturers in our review, by only sending eight of the sixteen PCIe 3.0 lanes from the CPU to the PLX chip.  This leaves the other eight to concentrate on the first PCIe slot, and should help single and dual GPU overclocking which can take a hit due to the PLX chip. 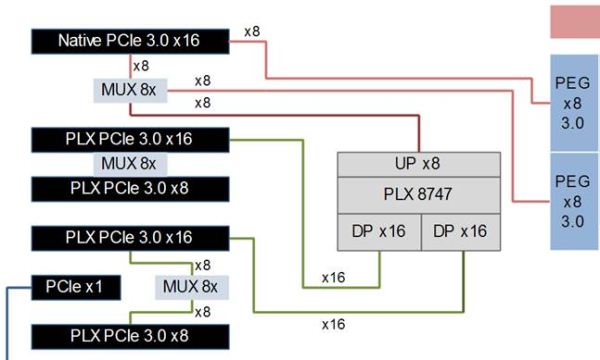 Users of multiple PCIe devices are advised to always keep the GPU in the first slot to maximize throughput, even if the system recognizes the electrically connected lane counts.  While it sounds better to have x16/x16 from placing GPUs in slots two and four, keeping them in slots one and four (x8/x16) is actually preferential due to the eight lanes direct to the CPU that the first GPU has.

If that was not complex enough, we should also point out that the EVGA Z77 FTW does not include a form of MultiCore Enhancement using BIOS 1.07 or below.  This feature on some other motherboards increases the CPU speed at heavier loading at the expense of power and temperature, but also increases their benchmarking scores a little.  EVGA say that they will have this ‘feature’ in a later BIOS.

Our testing also took another hit, with the EVGA Z77 FTW taking the same policy as Biostar and ECS on their Z77 motherboards, by not liking our test memory kit at XMP.  As a result, we had to run the system at DDR3-2000 9-11-11.  The memory speed of a board does not affect the test bed to any significant degree, but coupled with the lack of MultiCore Enhancement means that out of the box, given the testing results, the EVGA does not keep pace with ASUS and EVGA even at stock speeds.  This is shown quite dramatically during our 3DPM Multithreaded test, where the EVGA has a less than optimal multithreading turbo adjustment algorithm at play. 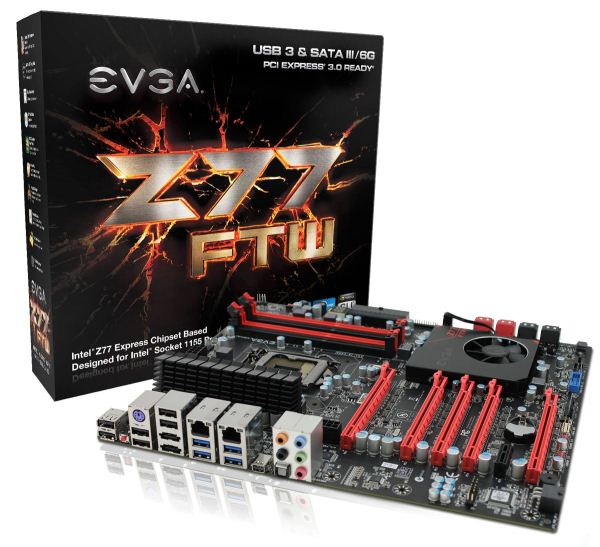 Feature wise, the Z77 FTW comes without the main video outputs, plunging for DisplayPort only, and in terms of extra features these are limited to a 24-pin ATX connector at right angles to normal, dual NIC, an extra SATA controller, access to three BIOS profiles, and a differently wired PLX chip.  There is a lot in the box as well, especially if you like back panel connectors.  Compared to the other motherboards in the review, some of which feature included WiFi, Bluetooth, Intel NIC, other video outputs, more USB 3.0 ports, better audio (EVGA Z77 FTW has only the ALC889), an easy installer package, graphical BIOS settings, and other extras like an mSATA port, the EVGA board is hit hard by the competition.

The EVGA Z77 FTW is beaten down heavily by the performance of the Gigabyte G1.Sniper 3, which also offers a lot more in the way of features while still having a PLX chip.  Even compared to the Gigabyte Z77X-UD5H, which is just over half the price, the Gigabyte has a lot more functionality if you do not need 4 x16 PCIe devices.  There are better deals to be had than the EVGA Z77 FTW in the market, which is of little comfort to a company that has obviously spent time over its product.