Our previews often give out a lot more information than you'd expect for a Day 0/Day 1 post, and have been confused for whole reviews in the past. So what do the reviews get you? Other than the battery life  testing, the big piece is the analysis of the whole picture. When we first looked at the performance of the device we were curious about the SunSpider score. So, what was so odd about that score? Let's look again. 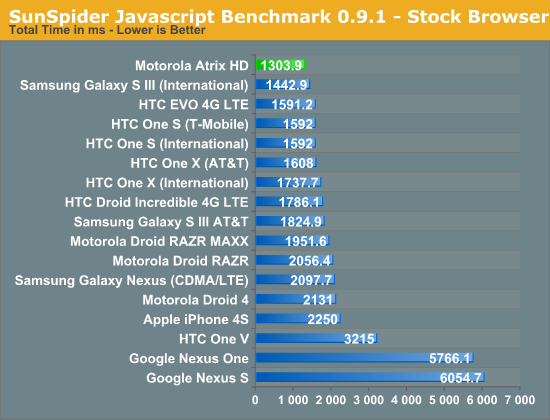 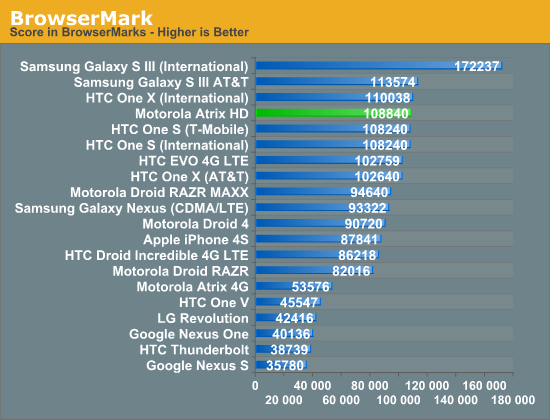 Our JavaScript tests give us a good feel for compute performance, but as much as stressing silicon, these tests gauge software performance, too. All Android builds aren't created equal, and with the hardware parity of so many of these devices (the S4 driven ones) these results bear that out. So, that Sunspider result, which stands nearly 20% better than the pack of S4 devices behind it, owes much of its success from the Motorola browser. But synthetic benchmarks are exactly that, synthetic; and they can be optimized for in order to drive up scores without necesarily providing a real world performance boost. There's nothing necessarily wrong with that, and that's not necessarily what's going on here. But, when you look at the BrowserMark score, you see a 5% deficit behind another S4 device, not the 20% lead we saw in SunSpider. So, what's a more real world result? 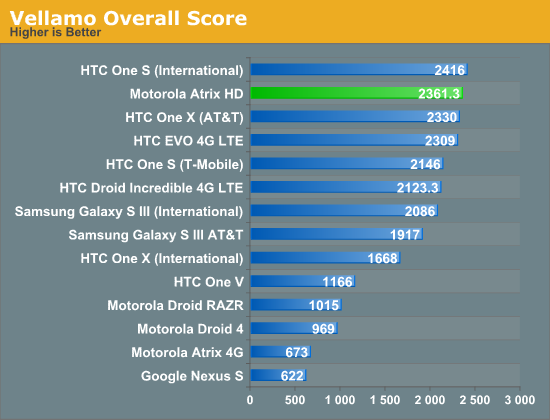 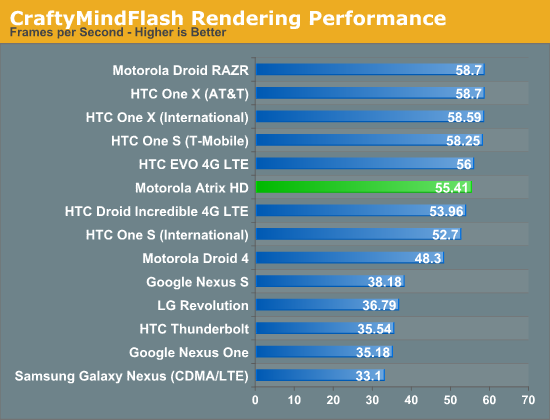 Vellamo is, notably, a Qualcomm developed benchmark that stresses networking, rendering, Javascript and user experience (namely scrolling behaviors). The results hint at a Qualcomm bias, with MSM8960 holding spots 2-6 in our chart; but that disregards the reality that no other dual-core SoC will be competitive against the S4 for several more months. Vellamo does provide a great way to stratify performance amongst S4-based devices. The Atrix HD bests the other S4 phones, but not in a devastating fashion. One component of Vellamo is that same SunSpider test we run separately, so the lead in Vellamo could owe itself entirely to that. Taking a look at Flash performance we see the Atrix HD falling within the pack, again. 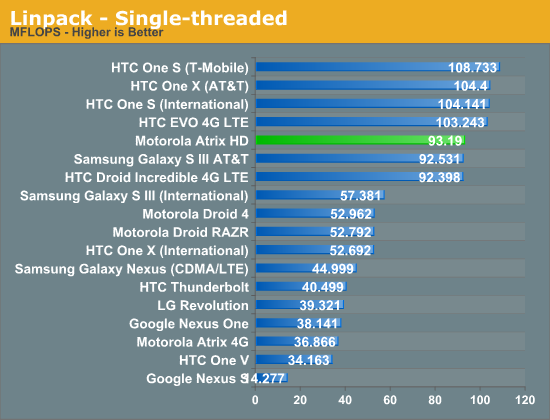 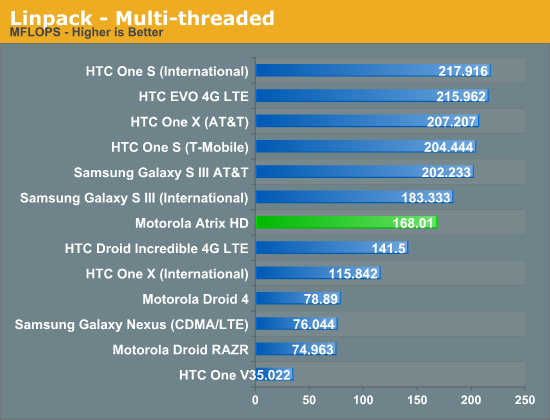 Things seem to fall apart a bit here, with results falling dangerously close to the 20% lower clocked Incredible 4G. This is a purely compute synthetic test, and it seems curious that any software changes would have a serious affect on compute performance, but stranger things have happened. Now onto GPU tests. 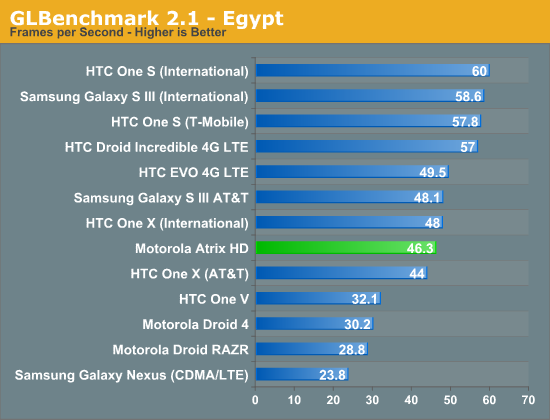 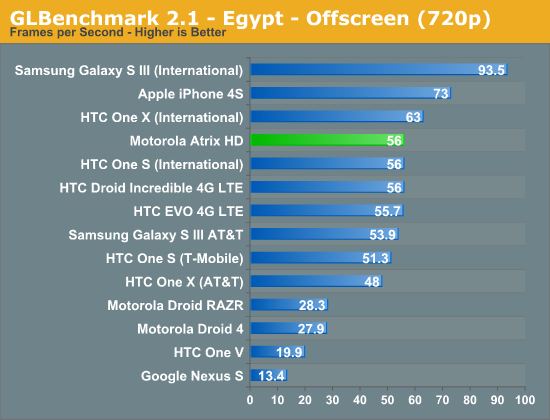 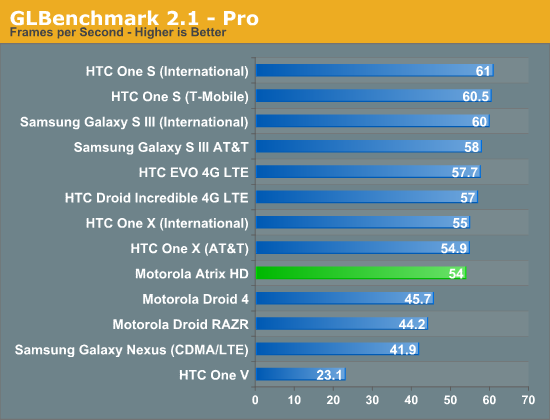 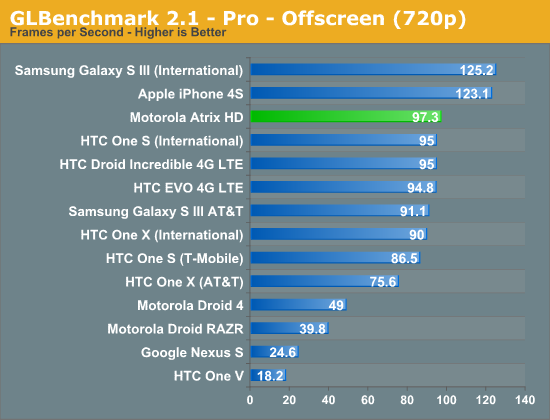 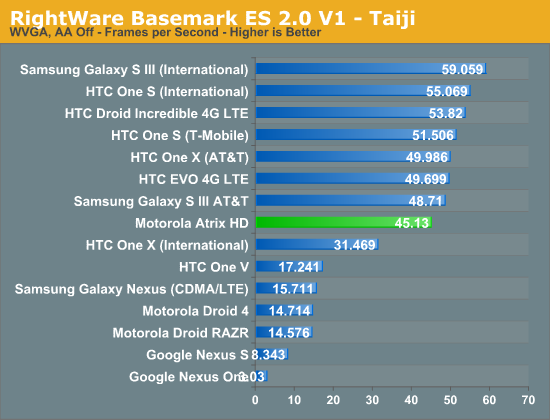 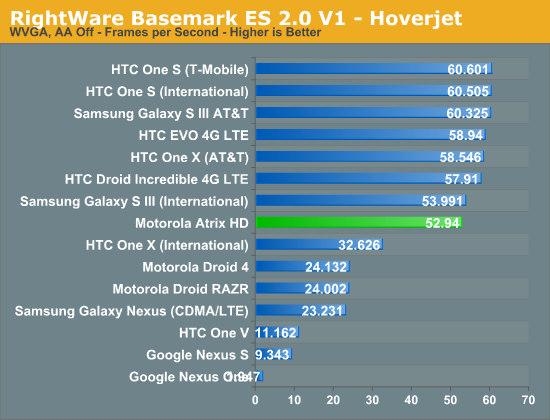 Several of our current suite of GPU tests have been pegging vsync for a while now. Offscreen tests bypass vsync so the results are more useful when performance clears 60 fps. Something interesting happens with the Atrix HD, though; onscreen tests fall below 60 fps by no small margin. Since onscreen and offscreen resolutions are the same, you'd expect performance to be equivalent in both tests. Instead you see a massive improvement in the offscreen tests. What's going on? There could be lots of things, from differences in rendering difficulty for onscreen and offscreen tests (triggered at the driver level), to thermal issues that arise because of the heat generated by the screen. Real gameplay doens't seem to suffer as much as you'd think, playing Mass Effect: Infiltrator and Shadowgun yielded smooth performance and no issues with image quality. But wait, there's more . . . 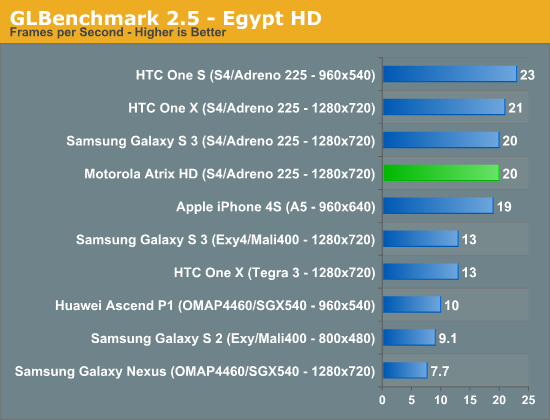 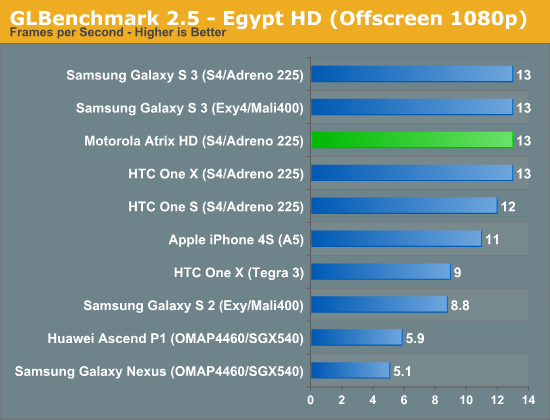 With GLBenchmark 2.5 the bar is raised and scores drop. The pack bunches up pretty tightly, particularly in the 1080p offscreen test. Here we see that performance falls right in line with the other S4 devices. Pair that with a performance hit in the other tests that's not likely to be noticeable and the takeaway is that Motorola's software tweaks don't hurt real world performance today, or tomorrow. So, no harm, no foul, no more.