Conclusion: What Makes a Trinity?

I have often wondered about where AMD came up with the codename Trinity (other than the river name, of course). Was it a reference to this being AMD’s third APU? Or maybe AMD was gunning for the Holy Trinity of Performance, Battery Life, and Cost—get wins in all three areas and you’d have a guaranteed best seller! If that’s what AMD was hoping to accomplish, they’ve got a good foundation but we’ll need to see what the laptop OEMs come up with before issuing a final verdict.

To recap, Trinity is AMD’s continued journey down the path they started with Llano. Both CPU and GPU performance have improved over Llano. The general purpose CPU performance gap vs. Intel is somewhere in the 20—25% range, while the GPU advantage continues to be significantly in AMD's favor. It is surprising that Intel's HD 4000 is able to win even in some tests, but overall AMD continues to deliver better GPU performance even compared to Ivy Bridge. It's worth pointing out that the concerns about AMD's battery life from a few years ago are now clearly put to rest. At least at the TDPs we've tested, AMD is easily competitive with Intel on battery life.

AMD's GPU accelerated software lineup this time around is significantly better than it was with Llano, but we're still not quite where we need to be yet. I will hand it to AMD though, progress is clearly being made. Battery life is generally a step forward vs. Llano, which is more than we've been able to say about Ivy Bridge thus far. 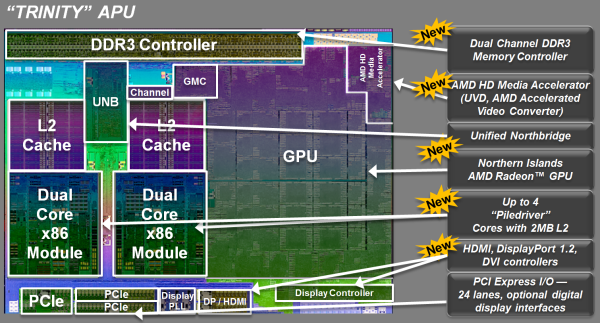 The improvements in Piledriver really appear to have saved Trinity. What was a very difficult to recommend architecture in AMD's FX products has really been improved to the point where it's suitable for mobile work. AMD couldn't push performance as aggressively as it would have liked given that it's still on a 32nm process and the APU needs to make money. A move to 2x-nm could help tremendously. Similarly the move to a more efficient VLIW4 GPU architecture and additional tuning helped give AMD a boost in GPU performance without increasing die size. Overall, Trinity is a very well designed part given the process constraints AMD was faced with.

As a notebook platform, Trinity's CPU performance isn’t going to set any new records but it’s certainly fast enough for most users; battery life isn’t at the head of the class, but it’s better than just about anything that doesn’t qualify as an ultrabook; and finally there’s the question of cost. That last item isn’t really in AMD’s control, as the final cost of a laptop is a product of many design decisions, so let’s do some quick investigation into laptop pricing.

If you figure on memory, motherboard, chassis, LCD, and storage as all being the same, a typical laptop will have a starting price point of around $300—for a cheap, injection molded plastic shell, 4GB RAM, a 5400RPM HDD, a 1366x768 TN panel, and a no-frills feature set. Take that same basic platform and you can make an Intel laptop and have a BoM (Bill of Materials) cost of around $450, or you can make an AMD laptop and your BoM might start at $400. Depending on what other upgrades an OEM makes, as well as marketing, R&D, and profit, and we end up at a final price tag that might be $600 for a Trinity laptop compared to $700 for an Ivy Bridge laptop. The problem is that AMD doesn't just compete against vanilla Ivy Bridge; it has to compete against all the existing laptops as well. 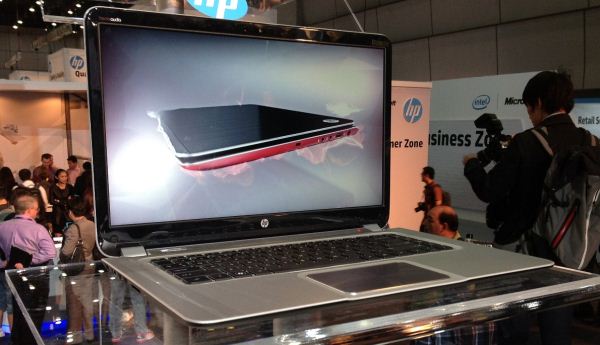 That pretty much defines the maximum price we should expect people to pay for Trinity, as Core i5 with Optimus will deliver better CPU and GPU performance based on our test results. Obviously there are other factors to consider, like build quality of the laptop(s), display quality, battery life, and features, but most people shopping for an inexpensive laptop are going to be looking at cost first and features second. On the other hand, if you want style as a consideration, HP’s new sleekbooks will have Trinity versions starting at $600 for 15.6” and $700 for 14”—though it’s not clear which APU you’ll get at those prices. As long as last-generation Sandy Bridge laptops are at clearing house prices, though, AMD’s partners are going to need to be under $600 for something like the A10-4600M laptop we’re reviewing today. Assuming they can manage that, Trinity should see plenty of volume with the back to school season coming over the next few months.

For those who are interested in more than just the bottom line, as usual the best laptop for you may not be the best laptop for everyone. Trinity in a 14” form factor like our prototype would make for a great laptop to lug around campus for a few years. It would be fast enough for most tasks, small enough to not break your back, battery life would be long enough to last through a full day of classes, and the price would be low enough to not break your bank. And if mom and dad are footing the bill, you even get to disguise the fact that it’s a gaming capable laptop by not having a discrete GPU specifically called out on the features list. On the other hand, if you’re after a higher performance laptop or you want a “real” gaming system—something that can hand high detail settings at 1600x900 for instance—your best bet continues to be laptops with an Intel CPU and a discrete GPU from NVIDIA, at least of the GT 640M level—I’d say AMD GPUs as well, but I’m still waiting for a better switchable graphics solution.

At this point, AMD has done everything they can to provide a compelling mobile solution. The difficulty is that there's no longer a single laptop configuration that will be "best" for everyone, and Trinity only serves to further muddy the water. Intel continues to offer better CPU performance, and if you need graphics—which mostly means you want to play games—they have a good partner with NVIDIA. AMD on the other hand is delivering better integrated graphics performance with less CPU power, and depending on what you want to do that might be a more well rounded approach to mobile computing. What we need to see now are actual laptops and their prices. To trot out a tired old saying once more, "There are no bad products; only bad prices." Now it's up to AMD's partners to make sure Trinity laptops are priced appropriately.