The Windows Recovery Environment, or WinRE, has actually been around for awhile. It was first introduced in Windows Vista as a basic boot environment from which users could run tools like System Restore, Startup Repair, and the Command Prompt, and it could also restore a complete OS image created by Windows Backup. 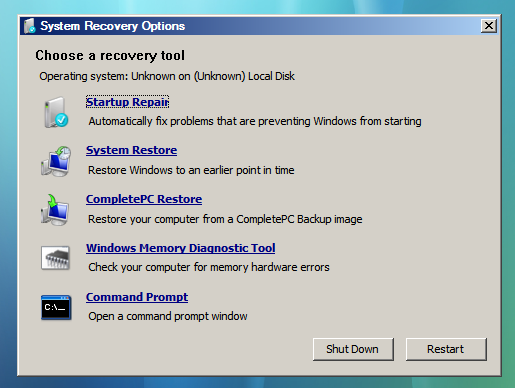 This menu remained basically unchanged in Windows 7, but in Windows 8 it picks up Metro styling and also replaces the text-based menu that appears when you press F8 at Windows startup, one of the last bastions of the Windows 9x/NT era to make it into 2012 relatively unchanged.

The new graphical menu presents all of the same options as the old WinRE, as well as access to the new Refresh and Reset functionality—the main difference is that options for booting into Safe Mode are buried in the Advanced Options rather than coming up right when you press F8. When you choose a function like System Restore, the desktop-style tools included in Windows Vista and Windows 7 will pop up and walk you the rest of the way through the process. Most of the troubleshooting options require you to input the name and password for an administrator on the computer, to prevent tampering.

There’s nothing groundbreaking here, but the Metro styling is functional and attractive. See the screenshot gallery below for more.

After Metro, this is probably one of Windows 8's more misunderstood features, so let's try to break it down and demystify it: UEFI (Unified Extensible Firmware Interface) is a replacement for the legacy BIOS found in most PCs. UEFI support has been around in the 64-bit versions of Windows since Vista, but it has only recently started to see wider adoption in PCs. In addition to being more modern and flexible than BIOS, UEFI supports a feature called Secure Boot, which can compare signatures in drivers, OS loaders, and other things against security certificates stored in firmware to verify that your computer is using a known safe bootloader rather than a malware bootloader. On both ARM and x64 computers certified for Windows 8, Secure Boot will be enabled by default to prevent these potential exploits. Note that this is an extremely brief overview of the functionality—you can read more on the Building Windows 8 blog if you’re interested.

Now, the problem people have with this new feature is that it can potentially be used to block any non-Windows bootloader from functioning, including those used in operating systems like Linux. By default, this is true, but you’ve got an out: in all x86-based Windows systems that ship with Windows 8, you should be able to add and remove security certificates from UEFI as needed (thus adding certificates that Linux needs to be recognized as a trusted operating system) or disabling secure boot entirely (making the Windows 8 PC act more or less like most Windows 7 PCs do now).

This will be slightly different for Windows on ARM—WOA systems will also support UEFI and thus the Secure Boot feature, but users won’t be allowed to add certificates or disable the feature, and OEMs will be disallowed from shipping updates or tools that unlock the bootloader (as some Android tablet makers have been known to do). You might not like this behavior, but the fact remains that this is how the vast majority of ARM devices work today. Linux advocates act as though Microsoft has taken something away in disallowing third-party OSes on WOA devices, when in fact they’re disabling nothing that hasn’t already been disabled on most competing tablets.