The other part of the story is Samsung’s mobile Digital Natural Image engine, or mDNIe, profile set on the SGS2. Numerous people have noticed that under Display -> Background Effect, lurks a page with a sample image and three presets - Dynamic, Standard, and Movie.

On previous Galaxy S devices there was a box in the camera app marked ‘outdoor viewing’ which increased brightness and contrast. I always wondered how that worked, and the answer is through mDNIe profiles. Inside /system/etc/ are a bunch of files prefixed with ‘mdnie_tune’ and then some more text, for example ‘mdnie_tune_camera_outdoor_mode’ and ‘mdnie_tune_standard_mode’. Of course, these are how the various settings are defined, and there are a bunch of them. 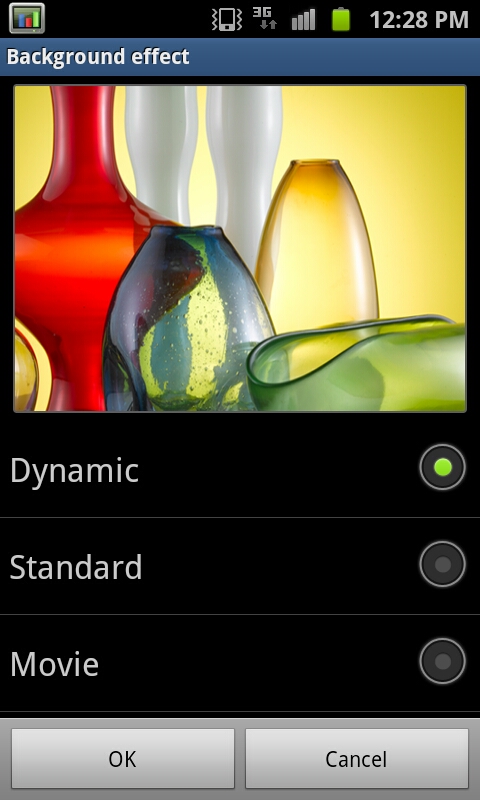 Inside are settings which control sharpening, saturation, and other things which are governed by mDNIe. For example, the mdnie_tune_ui_standard_mode file looks like this:

Movie and Standard just differ in CS (Chroma Saturation) Gain (from 30 to 50), and dynamic boosts that to 300 along with another field whose purpose I’m not certain of. I’m told by Francois that Dynamic also changes white point through mDNIe by clamping and thus results in some dynamic range being lost. Unfortunately there’s no - everything off - mode with no sharpening or chroma gain that makes colors less oversaturated out of the box, though if you have root obviously you can change and experiment with these. Now that we’ve mentioned it, all measurements I’ve done on the SGS2 were in the Standard mode.

Now what about brightness across the spectrum of user-selected intensity percentages? 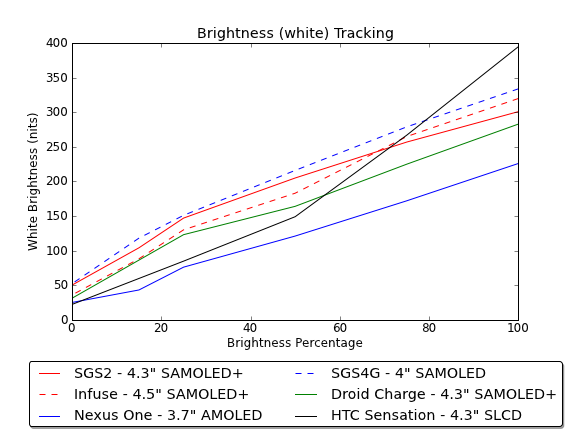 It’s redundant to show black brightness since each device measures 0 nits due to black pixels not emitting any light, so AMOLED remains super contrasty, even if brightness is about the same with SAMOLED+ as it was with SAMOLED. Thankfully the curve is nice and linear. 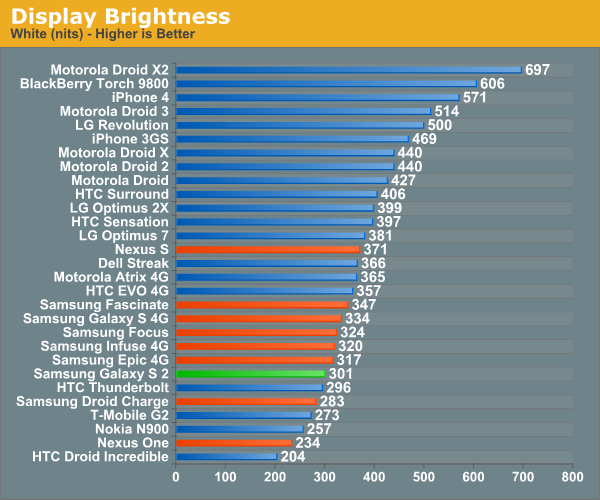 On the big display graph though, SAMOLED+ still isn’t as bright as the competition, though again having infinite contrast does make the display subjectively awesome indoors.

Outdoors SAMOLED+ is about the same as the previous generation. It isn’t very easy to see the display contents outside in direct sunlight, but then again what phone does look as good outside as it does inside? SAMOLED+ as mentioned earlier still leverages the optical bonding benefits (fewer reflections) that SAMOLED brought, so if you were pleased with view-ability there expect much of the same with this update.

The only major issue outdoors is something else entirely. I noticed pretty quickly with the Infuse 4G and Droid Charge that outside in my climate’s environment (~100+F outdoor temps, lots of sunlight) that the phones would clamp brightness to about 75% to prevent overheating. This is in part a measure to protect the display panel and of course other internal components. I set out to find out whether SGS2 implements the same thermal restrictions, and it does. 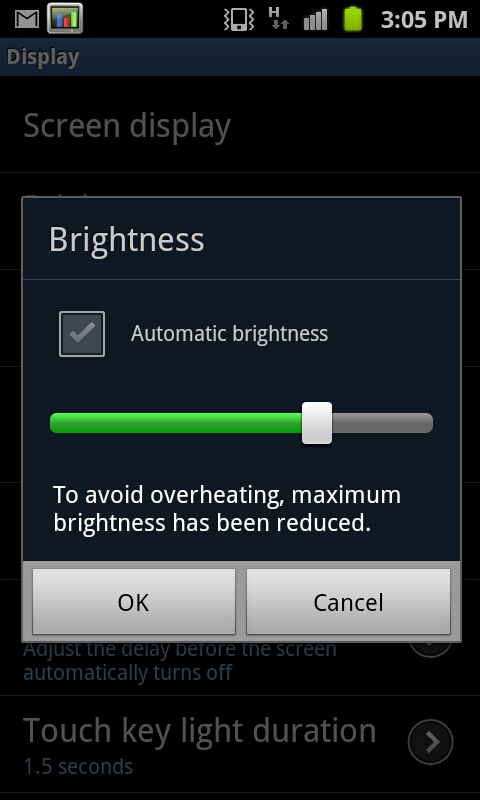 I broke out my contactless IR thermometer and went outside into the midday sun on my patio and set the phone down. Overheating and clamping down the display brightness doesn’t take long in this climate, about 5–10 minutes will do it. At around 115F (~45C) surface display temperature you’ll get clamped to 75% maximum until temperature drops down. I actually subjectively don’t think SGS2 is as prone to overheating as the Charge or Infuse.

Some other people have reported SGS2 crashing or encountering a thermal shutoff after a certain point, so I braved the heat and stayed outside even longer using the device until it hit well over 140F (60C) and still no system shutdown or overheating happened. That’s not to say it isn’t possible, as the SGS2 clearly does have thermal monitoring, for example the following lines from dmesg suggest some thermal monitoring going on, though I definitely crossed these boundaries to no ill effects:

Back to the display, next up are viewing angles, which the SGS2 thankfully preserves from the previous generation. I tossed the SGS2, SGS4G, and Optimus 2X in the lightbox and took pictures at various extreme angles. I realize the Sensation is a comparison point people are interested in, unfortunately that went back a while ago.

Another small thing about the SGS2’s SAMOLED+ is that I’ve noticed that high contrast images can be persistent for a few seconds. It isn’t burn-in, but a persistence that stays for a few seconds and can be very visible. For example, leaving the Android keyboard up (which is black, grey, and white) and dragging the shade down, a shadow of the keyboard remains visible until it fades after a few seconds. This persists even on other applications as well, and I can only hope doesn’t become something permanent if left up too long.

Wrapping up SAMOLED+ is difficult, because whether or not you like it over traditional LCD alternatives is ultimately a very subjective (and as I’ve learned in discussions, sensitive) matter. We’ve codified the differences between SAMOLED+ and previous generations, and other IPS displays, but really it’s impossible to communicate every subtle difference.

Personally, I prefer higher PPI IPS-LCD displays, though at 4.3“ SAMOLED+’s WVGA (800x480) isn’t a slouch, and the change from RGBG PenTile to an RGB stripe helps matters. Where WVGA starts to become a problem is at 4.5”. Scaling up area and increasing the diagonal size by 0.2“ doesn’t sound like a problem, but r^2 is a bitch, and at that size both the Android UI elements and subpixels look absurdly huge. Luckily, the international SGS2’s 4.3” is completely tolerable with WVGA.

Last but not least, the SGS2 supports HDMI out through USB MHL. For those that haven’t encountered the term before, MHL (Mobile High definition Link) is just a way of getting HDMI out through a low pin-count port alongside supplying power. So far, all MHL I’ve seen has worked over microUSB, but other interfaces possibly may support MHL in the future as well. 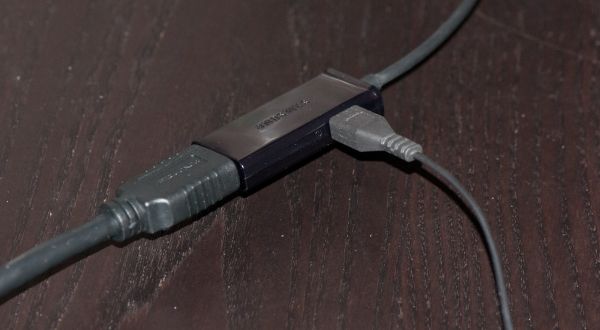 I had a Samsung MHL adapter laying around from a Samsung Infuse 4G, which has a microUSB port on the side for connecting to a charger, a full size HDMI port, and the microUSB connector which plugs into the host device. With all this connected, you can then get HDMI mirroring working, which does work on the SGS2. 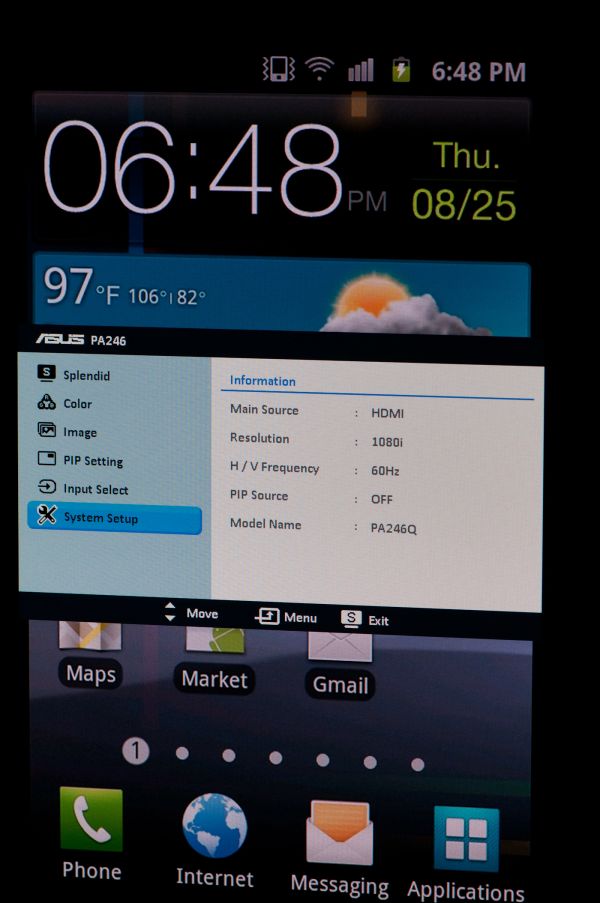 I connected the SGS2 over HDMI up to an ASUS PA246Q and saw it negotiate a 1080i link and do HDMI mirroring flawlessly. Landscape is also supported, thankfully, and seems to work just like it should.