The only downside of the Veer is that it’s clear HPalm had to make a few design tradeoffs to make such a small device. It’s pretty easy to illustrate the tradeoffs by just looking at all four sides of the Veer.

The Veer sticks to pretty much the same button placement as the Palm Pre. On the left side is the volume rocker, which is one continuous chrome button. Volume up and down are slightly mushy but nothing to complain about. 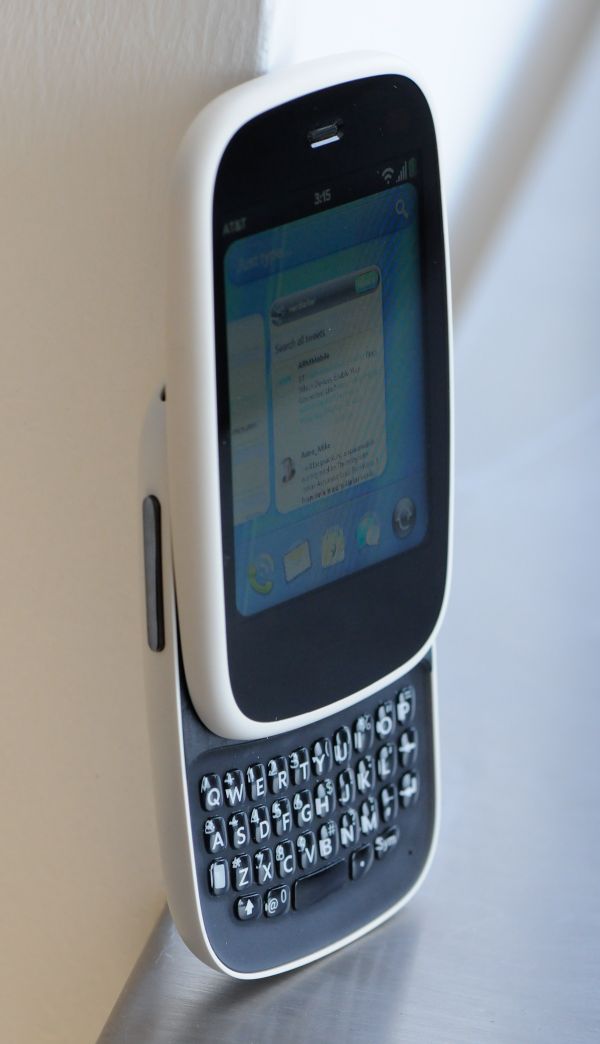 Up at the very top is a small port for a lanyard, and inside there is the port for dual-microphone noise cancellation in calls. To the right of that is a small black strip, even on the white colored Veer. 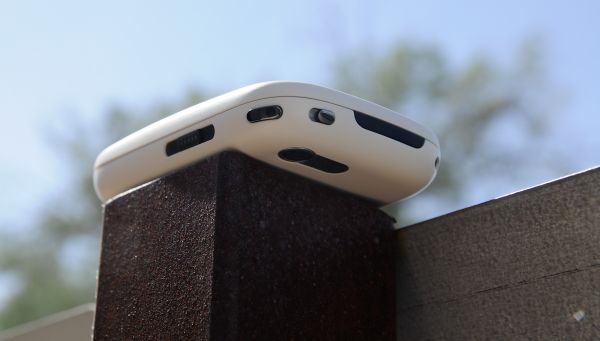 This strip is the SIM card slot cover, and pries off with a thumbnail. The SIM is held in place with a standard click-in, click-out mechanism that gets the job done. To the right of that is the vibrate and silence switch, and lastly the power button which straddles the right side. 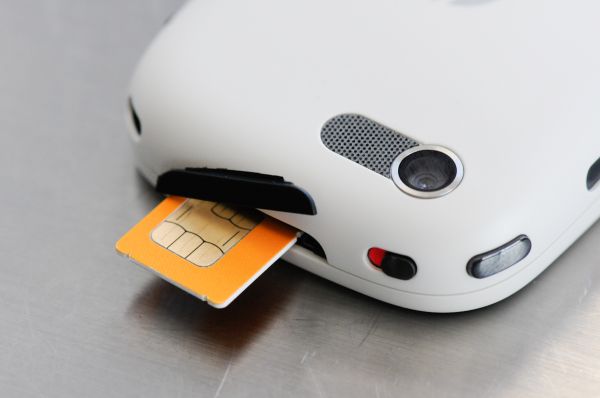 Where things get unique is on the right side of the Veer. If you’ve been paying attention, you’ll notice that absent from the Veer is a microUSB or 3.5mm headphone jack. 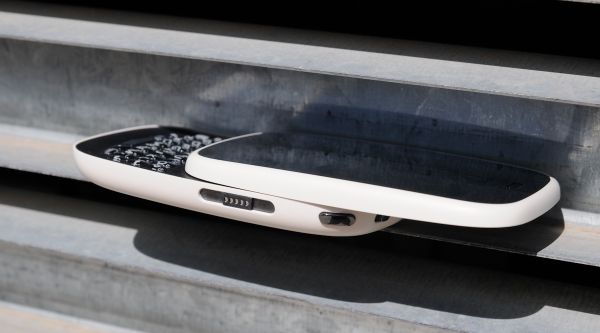 The Veer instead uses a proprietary magsafe-like connector with five pins for supplying both audio out and USB. There are two ferromagnetic metal pieces on either side which mate up with permanent magnets on the supplied USB cable and 3.5mm headphone jack adapter. 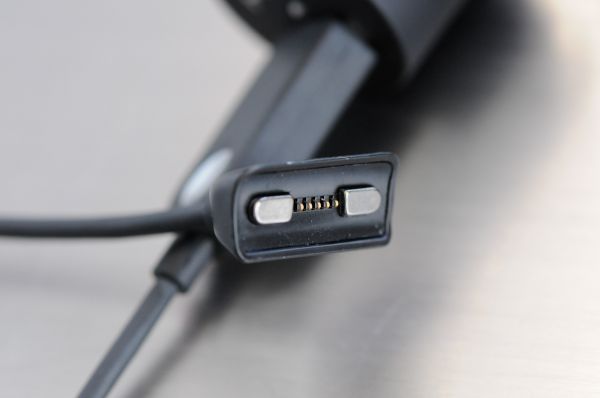 The result is that the Veer itself thankfully isn’t magnetic (and thus does not attract metallic particles, keys, and the like when in the pocket), but the cable and headphone jack both do. 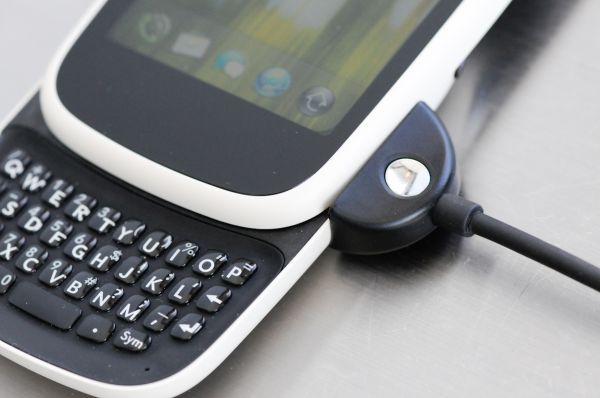 Both connectors don’t interfere with the slide open mechanism, and the USB cable doesn’t interfere with comfortable typing. It’s obvious to me that the port was positioned as far up on the Veer as possible and not dead center so that there’s as little interference with holding the phone and typing when either accessory is connected. 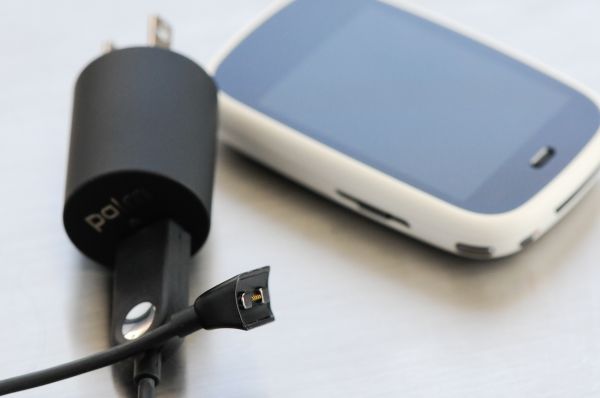 The downside of this tradeoff is that to charge the Veer, you need to bring the cable along. Honestly, I’d prefer a microUSB adapter that lets people use existing hoards of microUSB cables, car chargers, and AC adapters over a cable. Further, in European markets where microUSB is a standard, it seems that such a dongle will have to be supplied, likely in conjunction to the entire cable assembly. 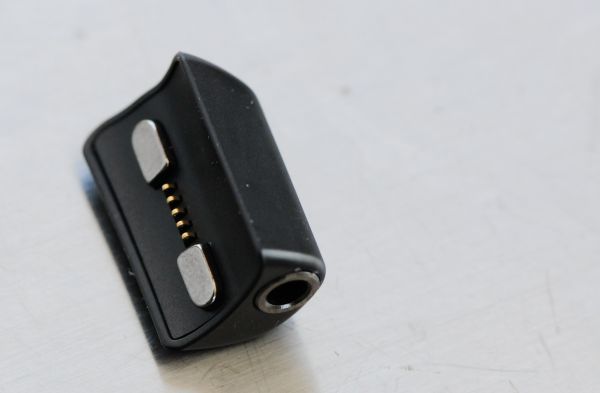 The Veer also uses the same proprietary port to supply its 3.5mm headphone jack. This is accomplished with the use of a small dongle that likewise magnetically attaches to the side of the Veer. 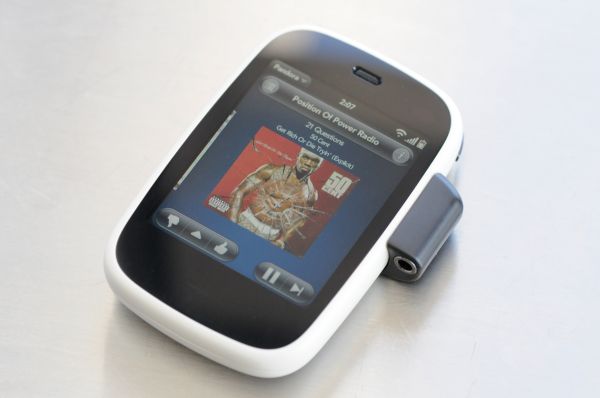 The 3.5mm headphone jack works fine, though the dongle’s size is slightly larger than the USB connector - it’s slightly thicker to accommodate the whole port. The connector is also a bit stiff, and as a result plugging and unplugging headphones the first couple of times is best accomplished by taking the dongle off and removing rather than inserting and ejecting while mated to the Veer. I did manage to break the detachable cable I was using in my Sony MDR-NC50 headsets, but that's more a function of the fact that the cable was loose and very close to death. Just be warned, the Veer's headphone jack is stiffer than most. 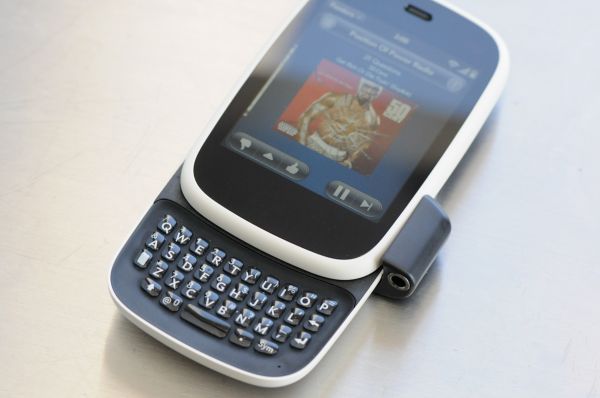 To be completely honest, the headphone jack adapter probably will be the thing most Veer owners lose first in part due to its very small size. If you’re going to get a Veer and are keen on listening to lots of music with it, you’re probably better served by purchasing a pair of bluetooth headsets with A2DP and AVRCP support. The adapter is nice to have but ultimately something that increases the size of the Veer when attached and is just one more thing to carry around. Obviously you can’t charge the Veer when the headset adapter is connected either, unless you use a touchstone charger. 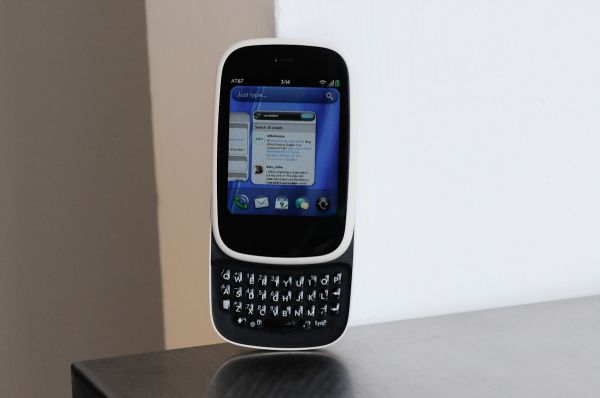 So what about the device itself? Build quality on the Veer is very good, it’s obvious to me at least that HPalm now has learned how to make a device with slide-out keyboard that doesn’t have any “Oreo effect” like that which plagued the original Palm Pres. The slider is completely solid and has virtually none of the aforementioned flex in any direction. It decisively slides open and closed with a firm spring assisted mechanism that nice controlled friction. It feels precise and crisp sliding open and shut. As a result, it’s easy to flip the Veer open with one hand and proper thumb placement on the display lip or center surface.

One of the problems I had with the Palm Pre Plus (and before it, the Palm Pre) was that when sliding the phone open quickly, the screen would exhibit obvious LCD distortion from pressure at the corners. This was extremely unnerving, and no doubt leads to excessive fatigue and premature display failure. None of that happens on the Veer, which is another plus. I can’t find any fault with the slider mechanism at all, which gives me hope for the Pre 3’s slider being equally awesome and sturdy. 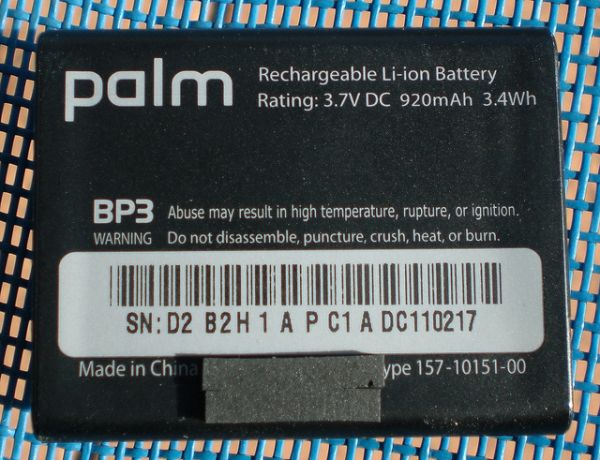 To preserve its small size, the Veer’s battery is internal and not user replaceable, and it’s on the small side as well, at just 910 mAh, or 3.4 Whr. This is reasonably comparable to the Pixi’s 1150 mAh battery, but still just short. There’s no obvious way to take the Veer apart, as the backside is one solid piece of plastic, and there are no visible screw holes or plastic snap tabs. That’s another tradeoff - you get an extremely small device with excellent build quality, but lose the ability to remove the back case and do replace the battery. I think for this form factor the tradeoff is a valid one. As we’ll show shortly, battery life really is surprisingly good on the Veer. 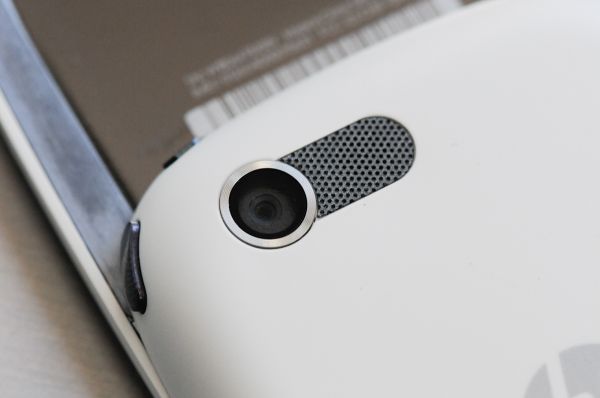 On the backside at the top left are the camera and speakerphone grille. Likewise, gone is the Palm branding, in its stead is the HP logo and beneath it AT&T. I find it a bit depressing that the Palm brand is now nowhere to be found (even the boot logo is a glowing HP logo), but that’s entirely HP’s perogative. 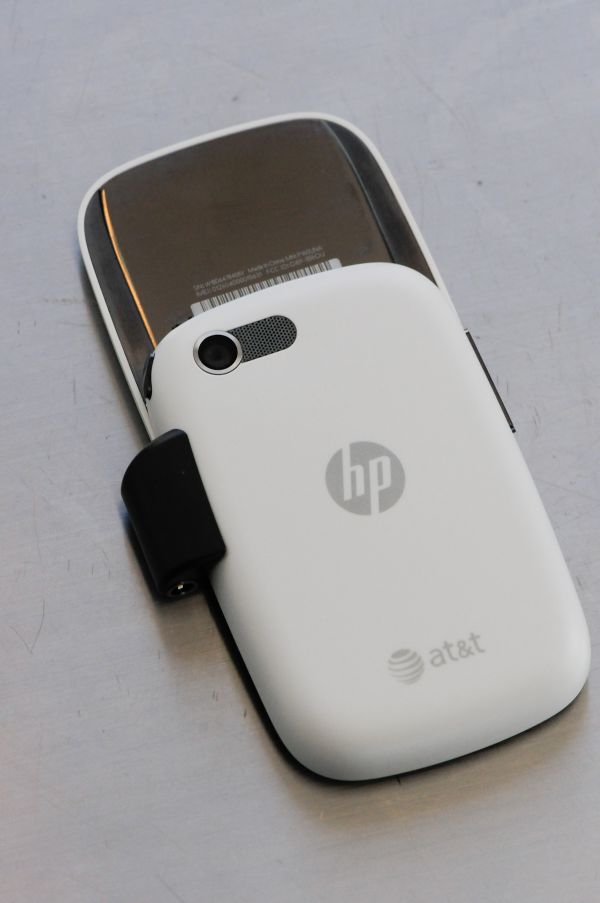 You might be wondering where the FCC and regulatory iconography went, since there’s no longer a battery door to hide it under. 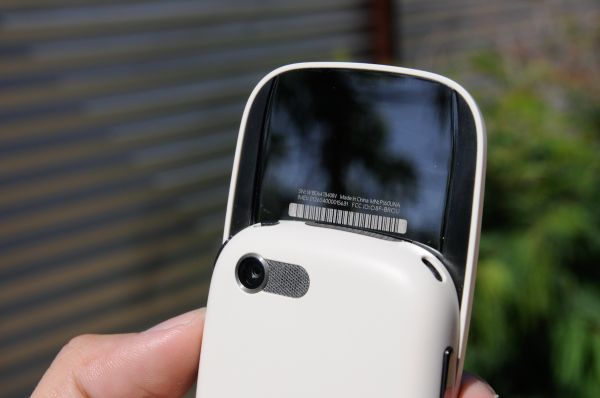 Slide the Veer open and the answer presents itself. The serial, part number, IMEI and FCC ID are all laser etched into the mirrored back surface of the display assembly. Palm has been consistent about preserving this back mirrored surface on the slider, which does some double duty for framing self portraits (not MySpace angle shots). 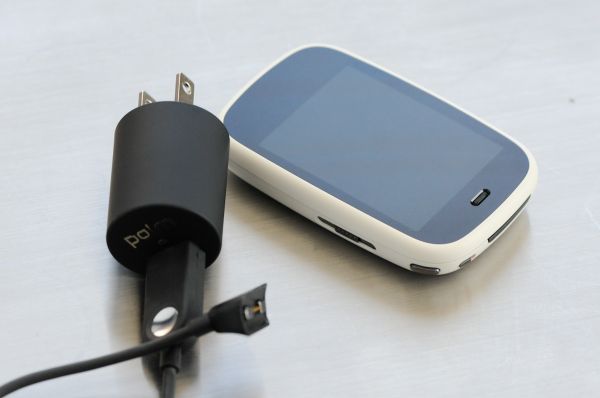 The front of the Veer is one continuous glass surface, the bottom area retains capacitive touch detection for WebOS’ gesture area. More on the display in a moment. Up at the top is the Veer’s tiny chicklet-like headphone grille. I’m reminded of the Nokia N900’s similarly tiny speaker grille when I look at the Veer’s. I always had a tough time aligning my head with the N900 speaker since the area was so small, but by virtue of the Veer itself being small, it’s much easier to center the Veer up with the auditory canal than the N900. Despite being small, earpiece volume and quality doesn’t take a hit either.