Battery Life: Better than the L501x

As mentioned earlier, Dell shipped us a 90Wh (the website states 92Wh, but our battery rates itself at 90Wh) battery for this review. However, we still have one of their 56Wh batteries from the previous XPS models available, so we tested both configurations. With the move from dual-core Arrandale to quad-core Sandy Bridge, plus a faster GT 540M GPU and HD 3000 IGP, we weren’t sure what would happen to battery life. It turns out that even sticking with the 6-cell battery, the L502x surpasses the L501x in all three of our battery life metrics. That’s good, because the large bump on the bottom of the laptop that the 9-cell upgrade brings into play is a real drawback. Here are the results. 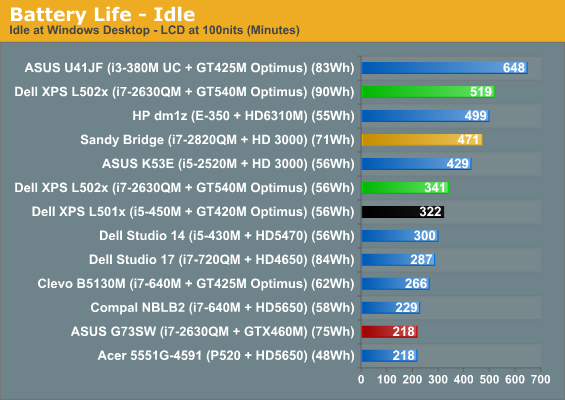 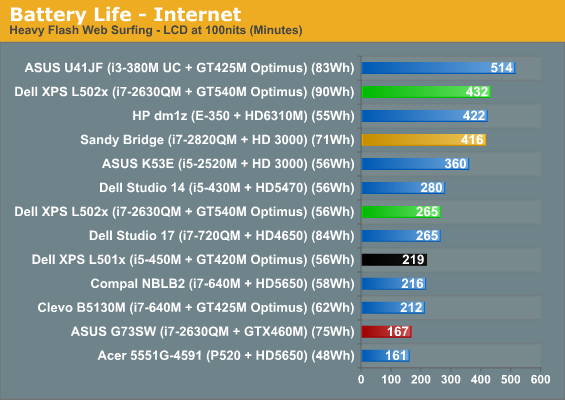 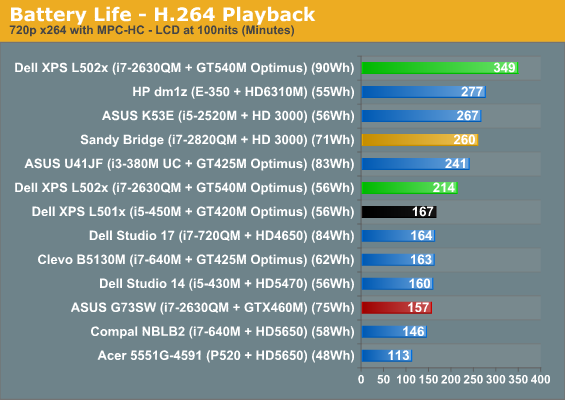 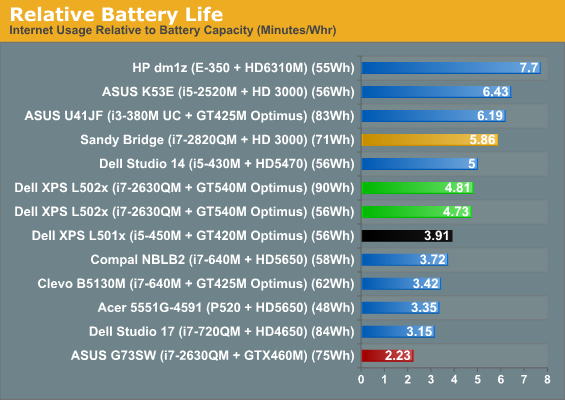 We’ve noted in the past that Sandy Bridge really improved H.264 playback power/battery requirements, and that shows up in our charts again. Compared to the L502x with a 90Wh battery, the smaller ASUS U41JF and its 83Wh battery still comes out ahead in our Idle and Internet results (though keep in mind that the U41JF has to throttle the Core i3 clocks way back to get those results). In the H.264 test, however, the 90Wh Dell comes out with more than a one-hour lead over the next closest competitor.  Even looking in Bench, the only laptops we’ve tested that offer better relative battery life for H.264 decoding use either Atom, Brazos, or CULV processors—and the dual-core SNB chip also does better than the quad-core SNB chips. Those are all far slower architectures, so the fact that SNB is even in the discussion is a feather in Intel's cap.

Battery life in general isn’t class leading for the XPS 15, but it’s good enough to satisfy most mobile users. With the standard 6-cell/56Wh battery, you can get 3.5 hours of video viewing, up to  4.5 hours of web surfing (more if you’re on simple web sites), and nearly six hours of idle battery life. Buy the larger battery and you’re looking at 8.5 hours idle, over 7 hours of Internet surfing, and nearly six hours of video playback. The relative performance of the two batteries also scales almost perfectly with cell count and capacity—the 9-cell lasts 52 to 63% longer than the 6-cell.

Rounding things out, we also tested a few other items, again with both batteries. In simulated gaming (looping 3DMark06/03), the L502x manages just 59 to 64 minutes on the 6-cell battery and 86 to 96 minutes with the 9-cell battery. Lower loads are clearly where hybrid laptops excel, so the combination of an active GPU and quad-core SNB is the exact opposite of a low load. Note also that unlike the GTX 460M, the GT 540M can run at full speed even on battery power (hence the low battery life). Setting the LCD to 100% brightness (instead of 40%, which corresponds with 100nits), idle battery life drops a rather large 27%, or in other words the LCD uses an extra ~3.9W for a 150nit increase in backlight intensity. That’s a lot more than we’ve seen with other laptop LCDs, but the 1080p panel is higher quality and gets brighter than much of the competition so we’re willing to cut it some slack.