The qHD Screen: A PenTile LCD?

You get these pixels by way of a 4-inch 960 x 540 resolution LCD display. This is almost the same resolution as Apple's Retina Display, albeit on a bigger screen. It's also the highest resolution display on an Android smartphone. Exciting, no? 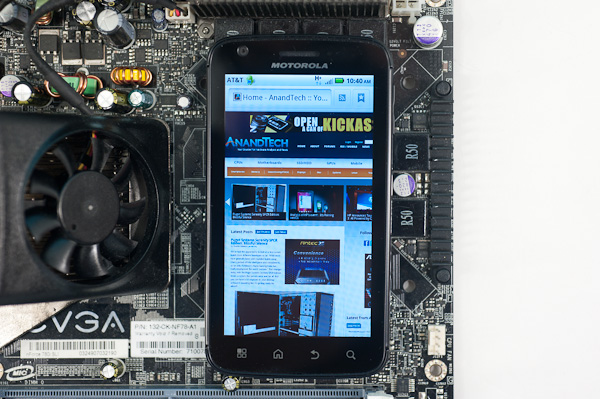 There's just one downside. Motorola uses a subpixel layout that should be familiar to those of you who follow AMOLED devices: PenTile.

Each pixel in an LCD or AMOLED is actually made up of three subpixels. In most LCDs this subpixel arrangement is RGB (red, green and blue). In order to extend usable life, all AMOLED smartphone displays use what's known as a PenTile subpixel grid. Instead of a RGB layout, you get an array of RRB and GGB pixels. As a result you minimize the number of blue subpixels, which lengthens the life of the display (apparently the blue phosphors are more likely to lose intensity over time than red or green).

Update: The image on the left is actually a stripe matrix, not a bayer grid

Brian Klug, our resident smartphone guru, is usually enraged at the sight of PenTile. Ryan Smith, AnandTech GPU Connoisseur, feels the same way. To some users the trick isn't noticeable. I typically fall into that category. AMOLED offers amazing contrast and that usually distracts me from the PenTile grid.

However, I've never encountered a PenTile LCD before.

The qHD display on the Atrix appears to use a PenTile grid. You can tell by this macro shot of the Atrix 4G vs. the iPhone 4: 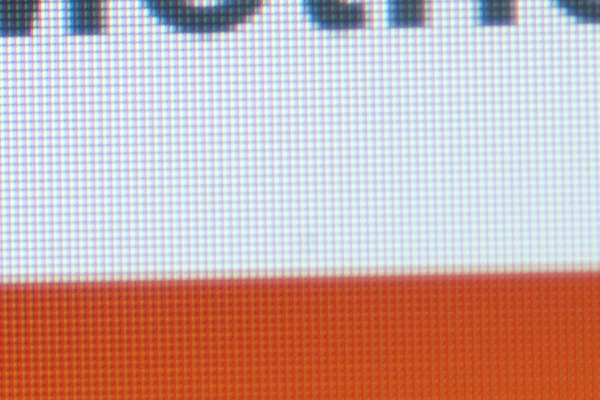 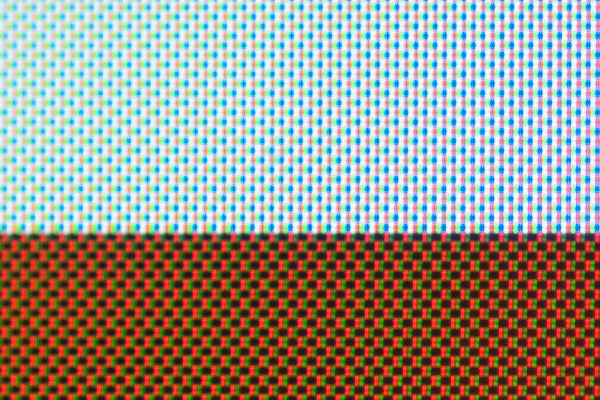 Note the ordered grid structure of the subpixels in the iPhone 4's display vs. pattern on the Atrix. PenTile is usually most bothersome when reading text - click the images to see them at full resolution.

Personally I was bothered a bit by text rendering (particularly aliased text on zoomed out web pages) on the qHD screen. For the most part, the qHD display was pleasant to look at and its PenTile upbringings didn't bother me.

If you're like our smartphone and GPU editors however, this may be a deal breaker for you on the Atrix.

The only explanation for Motorola choosing to use a PenTile LCD is Motorola wanted to reduce the cost of the display. The AMOLED argument obviously doesn't apply here. Remember Motorola offers double the on-package memory of the LG Optimus 2X (1GB vs. 512MB). A larger, higher resolution screen can't be any cheaper to integrate. Update: Power consumption is another advantage of PenTile and likely significantly contributed to Motorola's desire to go with a PenTile LCD. 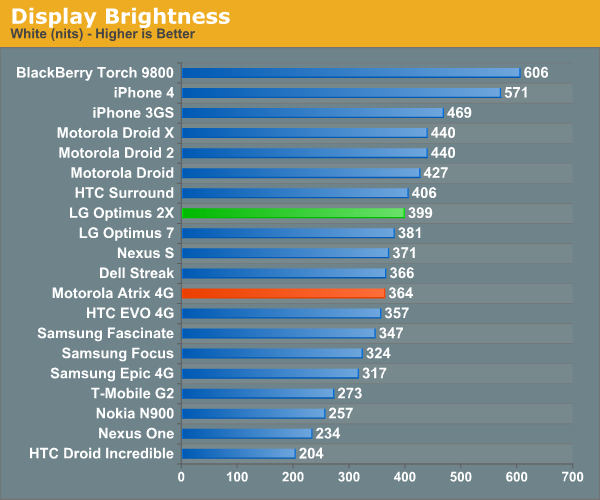 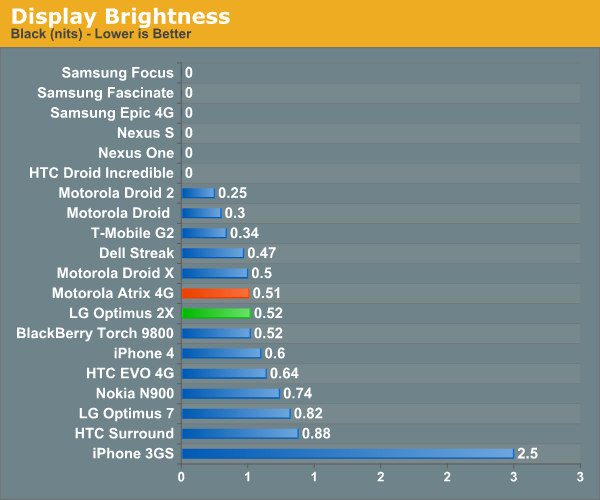 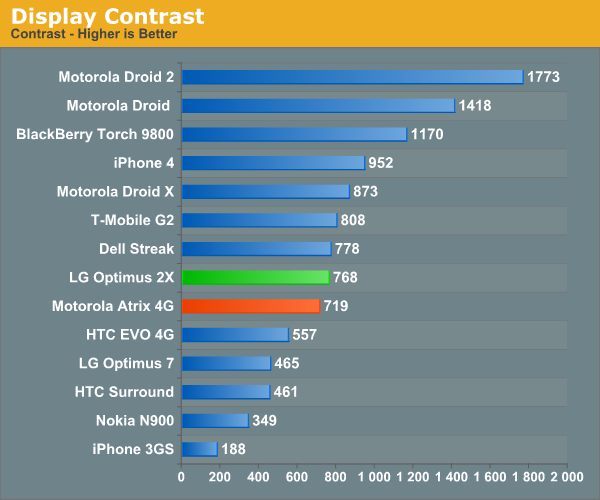 Combined with the higher than normal resolution, I'll say that I'm mostly pleased with the Atrix 4G's display. There is one downside to all of the extra pixels: GPU performance is lower in 3D games that run at native resolution.

The Atrix 4G has 35% more pixels on its screen, which means a heavier workload for the GPU. Given that Motorola integrates the same AP20H Tegra 2 SoC as LG, performance can be lower. 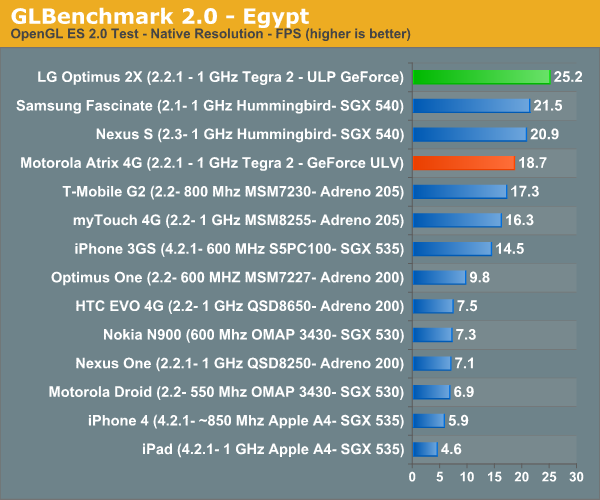 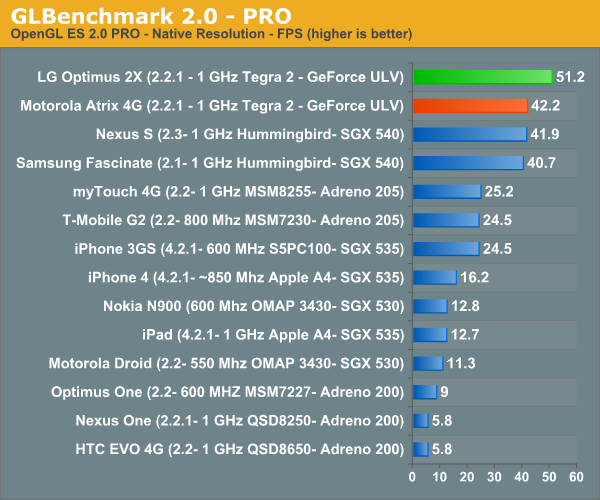 I measured a drop of 14 - 17% in GLBenchmark 2. Measurable, but not the end of the world. This actually puts the performance of the GeForce ULV on par with the SGX 540, albeit at a higher resolution. Luckily for Motorola, the number of heavily GPU bound 3D titles on Android is still minimal.