We ran the following games in their corresponding quality settings:

The graph below shows the performance levels you can get from a single GPU all the way up to four: 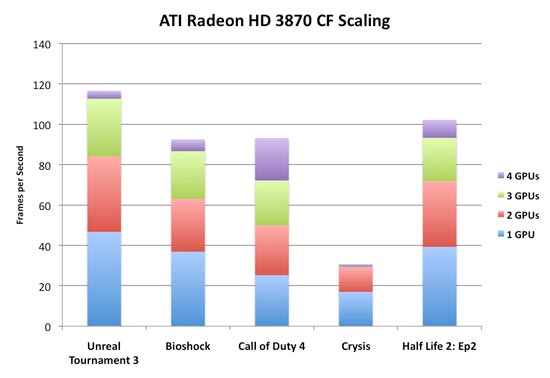 Obviously the biggest jump comes from one to two GPUs, but we still see some reasonable gains going from two to three. The value of a fourth GPU is simply nonexistent in most of the cases.

Let's put some percentages with the graph above to put things into perspective:

The move from one to two cards generally yields a healthy performance improvement, but the gains taper off as we look at the performance added by a third GPU. Call of Duty 4 is the only game that shows solid gains with 4 GPUs (29% over a 3-GPU configuration), the rest of the titles show mostly single-digit percentage improvements.  Once again we see that Crysis simply needs new, faster GPU architectures - four GPUs does absolutely nothing for this game.

Remember our 3-way SLI review from earlier in the year? Although the test systems were very different, the GPU-bound scaling should be comparable (if anything, NVIDIA should have the advantage of being run on an Intel system). Here's a quick look back at some of the comparable benchmarks:

Single to dual GPU scaling is similar with SLI as CrossFire, but the 2-way to 3-way gain is better on CrossFireX. NVIDIA's quad-SLI is not yet available so we're not sure how the 4-way scaling will compare, but so far it seems like CrossFireX is doing quite well in the pure numbers game.