We've been calling it Barcelona or Agena for several months now, but AMD has finally named its next-generation desktop processors; and the new name is Phenom. Not quite as odd sounding as the Athlon was when it was launched, but still very much an AMD product name. The new AMD line up is as follows:

The Phenom X4 and X2 processors are the sensible versions of the Phenom, these are the ones we will most likely be recommending out of AMD's lineup if history holds true. The X4 and X2 will be Socket-AM2/AM2+ only and are 100% backwards compatible with current AM2 motherboards.

The current Athlon 64 X2 has been renamed to the Athlon X2; given that both AMD and Intel offer 64-bit processors, dropping the 64 from the name makes sense. At the bottom of the list is AMD's Sempron, which is the only single core brand in the product lineup.

AMD hasn't updated us on other details for Phenom, which is a bit odd given how much more forthcoming AMD has been privately about other aspects of its microprocessor plans. Either AMD is doing its best to hide a rough ramp of Phenom or it is sitting on a very powerful weapon to combat Intel with, and we can't get any indication of which it is. 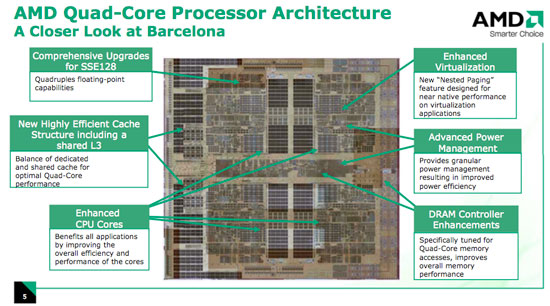 Architecturally, we've already said all there is to say about Phenom. The core is an evolution of the current K8 architecture, with a lot of attention placed on SSE performance and other general IPC enhancements. Phenom will also be the first monolithic quad-core x86 processor to hit the market, which does have some technical advantages but we're not sold on whether or not we'll see any tangible real world benefits over Intel's multiple die approach (e.g. we didn't see any benefit with monolithic dual core vs. multi-die dual core). 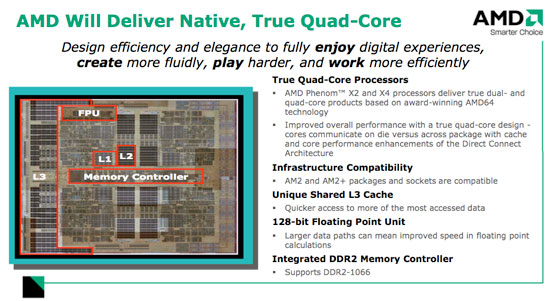 Phenom will work in current Socket-AM2/Socket-1207 motherboards with a BIOS update, but it loses the ability to run its Northbridge and CPU cores at separate voltages/clock frequencies. If you buy a new Socket-AM2+/Socket-1207+ motherboard, then the CPU cores and Northbridge can run at separate voltages/frequencies. The benefit of doing this is not only power savings, but AMD has indicated that it can actually run the Northbridge faster than the CPU cores (by 200 - 400MHz) which will improve performance. The L3 cache happens to run on the same voltage plane and at the same frequency as the Northbridge, compounding the performance benefits of using a new "plus-socket" motherboard (Socket-AM2+/Socket-1207+). 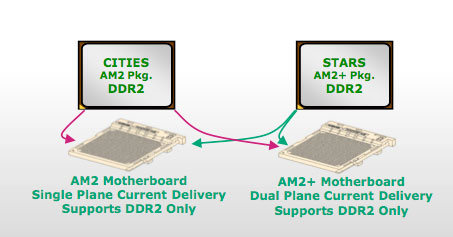 The memory hierarchy of Phenom has been improved over the current K8 architecture; there's now an L3 cache shared by all cores and a higher efficiency DDR2 memory controller, which is needed given that there are now more cores vying for the same amount of bandwidth.

AMD has officially confirmed that Phenom will support up to DDR2-1066, reasserting AMD's commitment to the memory technology it switched to a year ago.

What about DDR3?
Tweet
PRINT THIS ARTICLE
Comments Locked