We asked AMD's Phil Hester when he expects to see DDR3 make sense for the desktop, and he gave us an unusually candid answer. According to Hester, it won't be until late 2008 or early 2009 that DDR3 will make economic sense to move to. Given that Phenom will be DDR2 from the start, it looks like AMD's transition to DDR3 will be much like its transition to DDR2: it will complete well after Intel has made the move.

AMD views Intel's constant switching of memory technologies as adopting new technology for the sake of technology, while it prefers to respond directly to its customers' needs. Intel's argument has always been that it needs to make these transitions early to prepare the entire market for them. Clearly we need both approaches; we need a company to take the hit and move the market to a new memory technology so that volumes can ramp up enough to drive the price down. At the same time we need a company like AMD to give those in the know an alternative in the interim, otherwise we would all be paying a lot of money for a new memory technology that today offers no performance improvement.

If AMD moves to DDR3 in the late-2008/2009 timeframe it's unclear as to whether or not we'll need a new processor socket. AMD's current roadmap shows the second generation Phenom core (Shanghai) due out in 2008 but still on Socket-AM2+/1207+. It's quite possible that AMD will introduce another socket in late 2008 (AM3?) that will offer DDR3 support to begin its transition to the new memory technology.

AMD has quietly introduced Shanghai into its processor roadmaps, and it's the successor to the Barcelona core. Little is publicly known about Shanghai but you can expect the newer, open AMD to begin revealing details in a controlled manner; the days of a totally silent AMD are over. 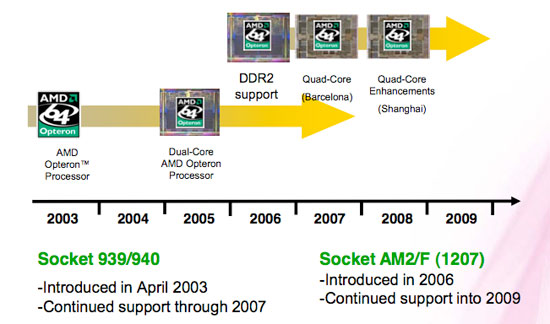 Based on AMD's roadmap, Shanghai will be socket compatible with Barcelona and it is listed as an enhanced version of the Barcelona core. Given that AMD is expected to be at 45nm in the second half of 2008, we'd expect Shanghai to be to Barcelona what Penryn is to Conroe. Unfortunately, Barcelona will most likely compete with Penryn and Shanghai will go head to head with Nehalem, and we have absolutely no indication of how those battles will end up at this point.

Today's announcement is more marketing than substance, but it brings us one step closer to what we want: Phenom performance results. Any noise from AMD at this point is better than nothing. Can you guess its next move? It may be more difficult to predict than you'd think...