Looking at the ASRock Z590 Steel Legend WiFi 6E BIOS, it hasn't changed much over the last couple of years compared to previous versions found on both its Intel and AMD-based platforms. The ASRock UEFI firmware uses a fairly basic GUI, including a black background, with turquoise, grey, and white text throughout. 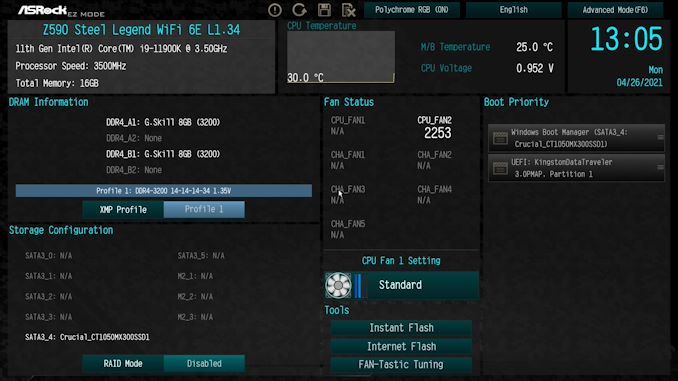 ASRock's UEFI firmware on the Z590 Steel Legend has two modes for users to select between; the EZ mode for novice users and the 'Advanced' mode for the more experienced. Looking at the EZ Mode, the GUI displays a basic yet informative list of different variables and settings. The top left-hand corner displays the motherboard model, the installed processor, the base clock speed of the processor, and the total amount of memory installed. Below this, users can see more information about the installed memory, as well as a one-click panel where users can enable or disable X.M.P profiles on compatible kits. In the center panel, users can look at fan speed on installed headers and allow users to set a basic fan profile between Standard, Silent, and Full Speed; this synchronizes all of the seven 4-pin headers to whatever option is selected. 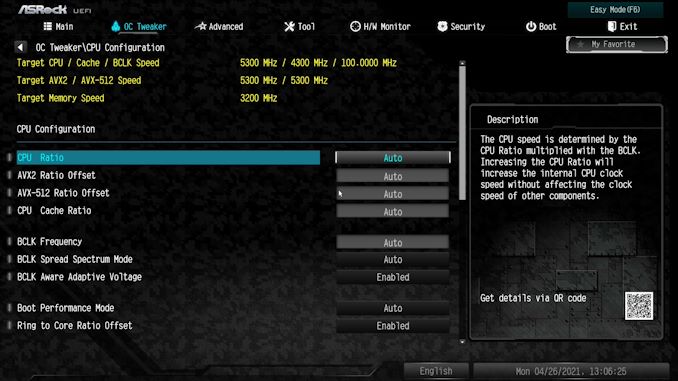 Pressing the F6 key in the firmware allows users to switch between the EZ and Advanced modes with relative ease. Users can access all of the board's available overclocking, power, and chipset-related settings in the Advanced mode. Along the top, all of the menu's are organized for users to find what they are looking for easily, including the OC Tweaker for overclocking, the Advanced section for chipset, storage, and IO configuration, the Tool section, which is quite basic on this model including firmware flashing and ASRock's Polychrome RGB utility, as well as the HW-Monitor for users to monitor temperatures and fan speed. The boot menu allows users to set boot priority, while the Security and Exit menus are self-explanatory.

Other variables to mention include ASRock's Polychrome RGB utility which makes an appearance in the BIOS. However, it is rather basic, and users looking to customize RGB LED lighting will find better options in the software package. ASRock includes its FANtastic fan tuning utility in the BIOS and allows users to synchronize fan settings across all of the fan headers and individually set them. Overall the firmware on the Steel Legend is functional, no-frills, and is quite pleasing to use. It is responsive with a USB keyboard and mice and has plenty of options for overclocking, power customization, as well as an easy-to-use firmware flashing utility.

The software bundle with the ASRock Z590 Steel Legend WiFi 6E isn't substantial, and we believe it's quite lacking compared to other ASRock models we've seen recently. The core software programs include the ASRock Live Update & App Shop and the ASRock Polychrome RGB Sync utility, the ASRock Restart to UEFI tool, and the Nahimic Audio software. 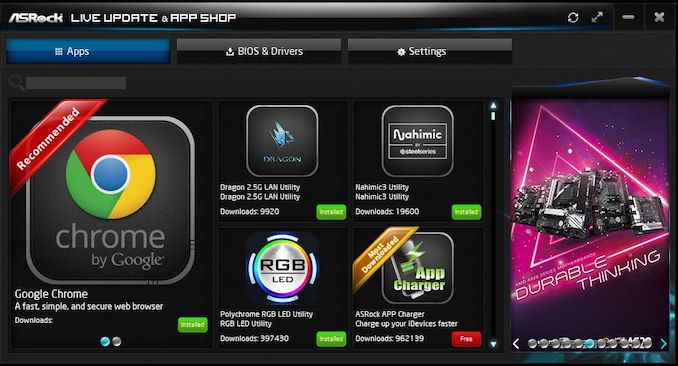 At the heart of the software package is the ASRock Live Update & App shop utility, which allows users to download and install various software utilities and drivers for the board. This includes things like Google's Chrome web browser, the Nahimic 3 audio utility, the ASRock APP Charger, and ASRock's Polychrome RGB software. One negative is it does advertise a wave of gambling software, which we find very garish and untasteful, and we would like to stop seeing this.