I was in Austin visiting AMD when I saw the email - Intel was prepping a dual core system to be sent out my way for a preview.  That was last Wednesday, the machine arrived on Friday, and today's Monday; needless to say, it's been a busy weekend.

This type of a review is a first for Intel. For the most part, doing an officially sanctioned preview with performance benchmarks isn't in the Intel vocabulary.  Don't take this opportunity lightly - this is a huge change in the thinking and execution at Intel.

Make no mistake, Intel isn't officially releasing their dual core desktop processors today; this is merely a preview. Intel's dual core line is still on track to be released sometime in the April - June timeframe.  Intel will beat AMD to bringing dual core to the desktop first, while AMD will do the same to Intel in the server/workstation world.  We still have no idea of actual availability when these chips are officially launched. Remember that all of the first generation dual core chips are basically twice the size of their single core counterparts - meaning that they put twice the strain on manufacturing.  Intel, with 11 total fabs, is in a better position to absorb this impact than AMD, but both have paper-launched products in the past, so there's no telling which way the dual core wars will go initially.  All we can say at this point is that we've seen dual core parts from both AMD and Intel running at full shipping speeds, and Intel was the first to get us a review sample for this preview.

The clock speed race is over, both AMD and Intel have thrown in their towels, and now it's time to shift to dual core.  Intel has been extremely forthcoming with their dual core roadmap, and for those who aren't intimately familiar with it, here's a look at the next 24 months from Intel: 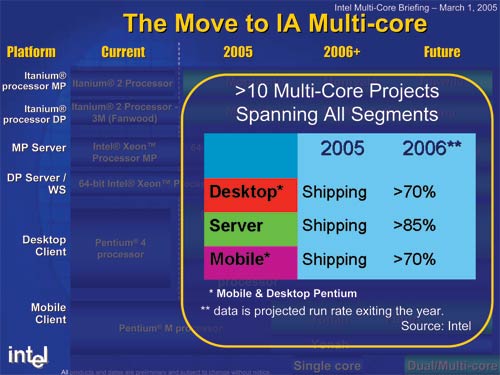 The green bars are dual core, the blue is single core.  Enough said.