915 Motherboard Roundup: Socket 775 for the Rest of Us

The Gigabyte 8GPNXP-Duo, like the DFI LANParty UT 915P-T12, is designed to make the upgrade path to Socket 775 as easy and flexible as possible. Both boards will work with DDR2 or DDR memory. The Gigabyte adds a further twist by providing 4 DIMM slots for regular DDR memory. Gigabyte includes their trademark Dual-Power module to provide 8-phase power to the 8GPNXP-D. Gigabyte has redesigned the Dual-Power module for their latest Intel Socket T boards. It is lower profile and is located between the ports and the CPU where it will not interfere with airflow to/from the CPU. More than any other manufacturer, Gigabyte tends to load their top motherboards with every feature but the kitchen sink, and in this regard, the 8GNXP-Duo is a loaded motherboard even though it is based on the mainstream 915P. 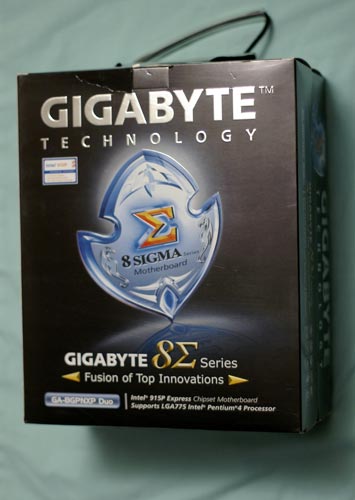 We first tested the 8GPNXP-Duo in our launch review of the 915/925X chipset, where it was very useful to have a board supporting both DDR and DDR2 for our testing. In this 915 roundup, we have tested both dual memory motherboards with DDR2 memory, since we have found DDR2-533 running at more aggressive 3-3-3-10 timings to be a small amount faster than DDR.

Features of the 8GPNXP-Duo are very similar to the Gigabyte 8ANXP-D motherboard tested in the 925X roundup. This includes Dual Gigabit LAN connections with the Broadcom attached to the faster PCI Express bus and the Marvel attached to the PCI bus. Gigabyte provides 4 SATA ports with RAID capabilities supported by ICH6R. 4 more IDE ports are added to the ICH6R 2 ports (total 6) with the added ITE 8212 controller. Since many have complained about just 2 IDE ports on the 915/925X chipset, buyers of the Gigabyte will appreciate the additional ports for IDE (PATA) devices.

Gigabyte was the first manufacturer to support on-board fast Firewire "b" ports and 3 1394B ports are included on the 8GNXP-Duo. Gigabyte also fully supports the Realtek ALC880 high-definition audio codec, which interfaces with the Intel HD audio (Azalia).

A wide range of overclocking options is available in BIOS with useful ranges for the typical overclocker. Memory voltage can be adjusted to 2.1V from 1.8V, a wider range than Gigabyte usually provides for memory. The FSB, CPU voltage, and PCI Express voltage also have ranges that are useful for overclockers. Gigabyte does not provide any BIOS options for PCI Express clocks, so you have to depend on the board to make adjustments for you to get past the 10% overclock roadblock. 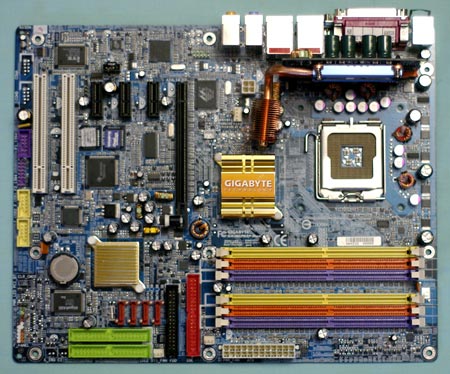 Layout of the Gigabyte generally works well, and we do like the pull release for the PCIe x16 slot. All you have to do is mount and unmount a 2-slot nVidia 6800 Ultra to learn to hate the push-lever design used on most motherboards. There are a couple of things that could definitely be improved upon on the layout of the Gigabyte, however, and they are the same complaints voiced in the Gigabyte 8ANXP-D The IDE and floppy connectors are at the end of the PCIe video slot - a terrible location. What makes it worse is a long card (like the nVidia 6 series) falls right between the floppy and IDE connector, making cable routing to mount and unmount the video card to be a real pain. The 24-pin power connector is fine at the upper right edge, but the 4-pin 12 volt sits almost in the center left of the board. That makes snaking the 12V cable around the CPU difficult in most case designs. The 4-pin 12V connector would be better located at the board edge where it would not interfere with the heatsink/fan on the CPU. You can work around these two issues, but they can definitely be improved upon. Otherwise, the layout works fine in most cases.