In terms of video recording, the iPhone XS promises an improved dynamic range in modes up to 30fps. What this likely means is that the phone’s able to capture in HDR mode in the 30fps modes, doing the same kind of processing we also see in SmartHDR still pictures.

Also something I’ve dreaded on iPhones for years; the new iPhone XS finally introduces stereo audio recording. Why it took Apple such a long time to finally introduce stereo recording is something that boggles the mind, but, let’s not complain, as we now finally have it on the new generation.

Comparing the iPhone XS video to the iPhone X, there’s one thing that is immediately very evident: the new XS is able to produce much better image stabilisation than last year’s flagship. Indeed, it looks like Apple vastly improved the OIS/EIS on the new phones, as the wobble that happens when walking is gone on the XS.

Audio recording finally is up to par, and we can hear the wind and rustling leaves of the trees around us. I think Apple might still have to work a bit on the wind noise cancellation, as in some parts the audio sounded as if it was inside a tube.

In terms of image quality, Apple’s claims of the improved dynamic range are very much verified. The phone showcases a lot more brought down highlights in the scene, and in darker areas, show better shadows. It’s unfortunate that this is limited only to the 30fps modes, but it’s understandable.

Switching over from the main lens to the telephoto lens happens relatively fast, although with a short exposure flash and a slight delay on the first zoom. 4K60 recording doesn’t allow for the use of the telephoto lens.

All in all, the video recording quality of the new iPhone XS is massively improved in all areas of stabilisation, picture quality, and audio. 4K30 recording on the XS is probably the best I’ve seen on any smartphone – a definitive applause to Apple for the improvements here.

Apple claimed to have improved the speaker audio quality on the new iPhone XS, allowing for more stereo separation and filling sound. I had introduced a new speaker evaluation method a few months ago because this year’s efforts by smartphone vendors to improve speaker quality has been very pronounced, and I wanted to have a way to objectively convey these improvements.

Starting off with speaker loudness, we’re measuring the phones at maximum volume, both in one-hand portrait mode, as well as two-handed mode where the palms are cupped towards the user. These two use-cases are what I find myself most often using the phone’s speakers in, so hopefully that also represents how most users use it as well, please let me know otherwise! 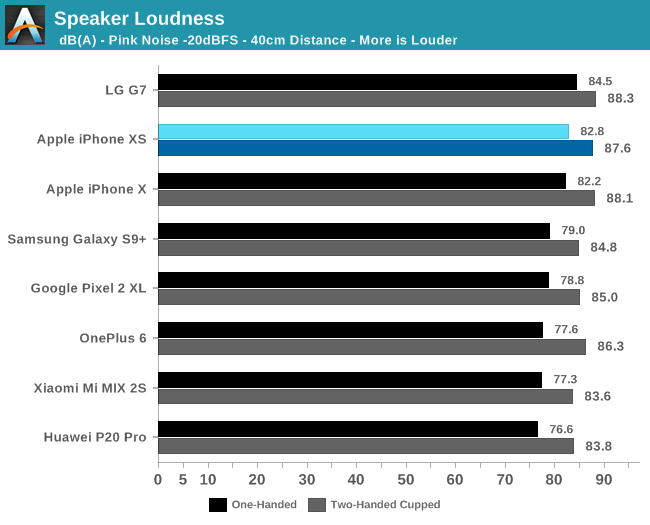 Using a pink noise signal, the iPhone XS pretty much falls into line with the results of the iPhone X, coming in at a very loud 82.8dBA in portrait mode and 87.6dbA in two-handed mode. Apple’s sound directionality on the iPhone X and XS is among the best, most likely due to the fact that the stereo earpiece is among the loudest of current generation smartphones. 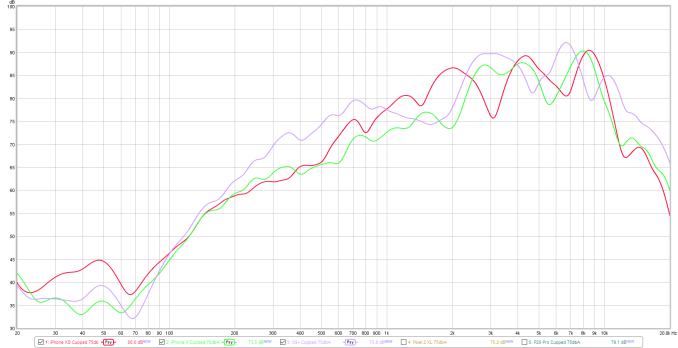 Measuring the frequency response of the speakers, we see the iPhone XS closely following the measurement of the iPhone X, however there’s a major difference in the mid-range where the XS is around 5dB louder, raising instrumental frequencies and voices. This difference is what I think Apple is referring to when talking about better “fullness”, as it is evident when playing back media. 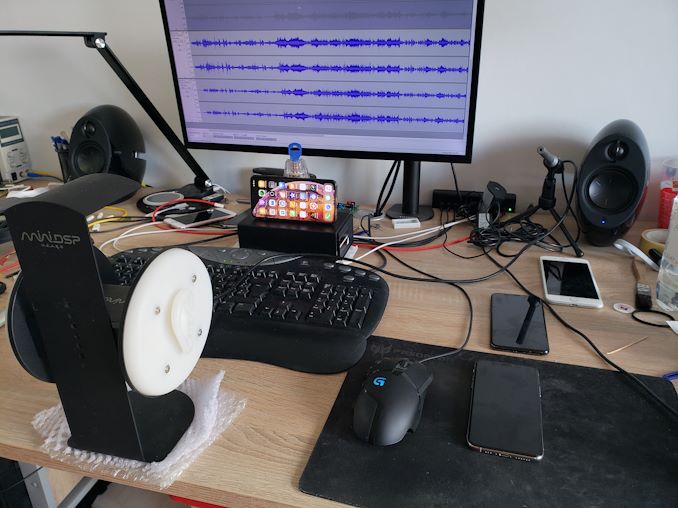 To better demonstrate the difference between the phones, I’ve attempted to capture them with a binaural microphone setup. Now I know my environment isn’t perfect as I don’t have the necessary sound dampening equipment, but I hope it does serve as an overall adequate A/B comparison between the phones. I’ve tried to calibrate the sound as much as possible recorded by the setup to a flat frequency response, although I’m sure there are improvements to be made. As a comparison, I also included calibrated speakers as a baseline to get an idea of the microphone setup.

The audio is meant to be listened to with headphones, or even better with IEMs, as this will give the intended playback of the binaural recording.

The iPhone XS’ improvements in the mid-range are quite evident as voices sound deeper and more pronounced on the new phone. Stereo separation is also quite good – resulting in a filling audio experience.

I included the S9+ and G7 as comparison devices. Samsung still does a significantly better job at the low-mid ranges which gives the phone more overall presence than the iPhones, also has an advantage in the very high frequencies giving more clarity, however the new iPhone’s XS strength point in the mid-ranges is the S9’s weakness, and vocals sound a lot less present than on the XS.

As for the G7, I just wanted to showcase a mono speaker device, and just how huge the audio difference is. Unfortunately the G7, even though it promises to have a good speaker, fails in practice.