Inside Elitegroup Computer Systems: From Taipei to Shen Zhen

Biloda PCB: The Birth of a Motherboard

To say a motherboard is “born” would be the actual PCB fabrication itself. As we mentioned earlier, Elitegroup owns its own production facility in Shen Zhen off the ECSM campus. Biloda, as it is called, is one of ECS’ prized facilities. The factory itself has 1,700 workers, and like most factories in Shen Zhen, the workers live on campus in their own dormitories. Remember, Shen Zhen is a work district; so workers come from other providences in China to work even for a mere $150USD per month. Although it would never be allowed in most countries, the workforce is primarily female because studies seem to prove that females have a slightly higher concentration level than males. Accept it or not, ECS is only one of thousands of companies that employ females for manual labor. 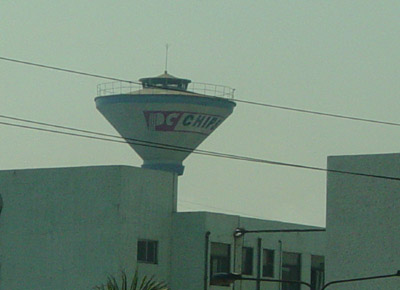 However, that is enough about politics for now. As we pulled up to the Biloda PCB factory, it’s very apparent that this factory complex is completely different from the ECSM campus. This is one of the older facilities in the company, built in 1995. The factory chairman is the same Johnson Chiang, President and CEO of PC Chips. Thus, while touring the factory, pretty much everything seemed to have PC Chips still written on it. It is sort of a moot point since this factory is actually slated to be replaced with a newer facility capable of 300,000M2/month of motherboard PCB. 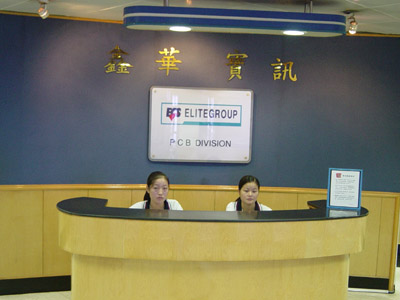 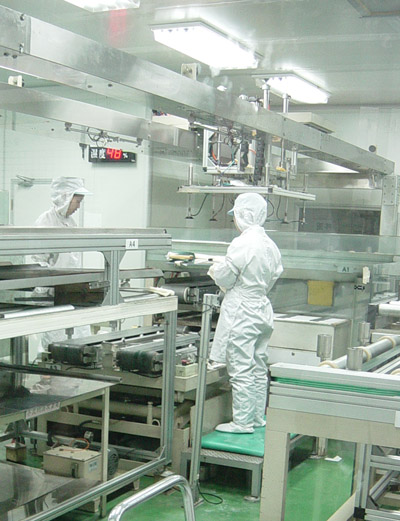 
Above, you can see two workers pressing PCB layers together. This is where the motherboard begins its long journey to becoming a final product. In this particular image, 4 layers of PCB are pressed together with insulation between each material. Obviously the more layers, the higher the signal quality of the circuitry of the motherboard. ECS has other facilities in the Biloda complex capable of 6, 8 and even some 10 layer production. You may know that PC Chips recently got into the ATI video card business, and 4 layers PCB just doesn’t cut it. Also for laptops, ECS needs to use 8 and 10 layer motherboards to keep interference down.

At this point, the board is etched for drilling. A black oxide process covers the etched elements, and then the board is finally laminated. Once it is laminated, the board looks just like a flat blank PCB. 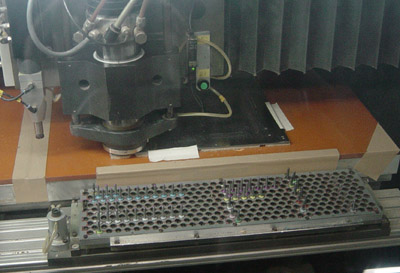 
Next you’ll see that the pressed motherboard is moved over to the drilling factory. This is a separate building from the rest of the facility and clearly, the part of the tour where everyone goes “ooh — ahh”. Once a board has been pressed and cooled, the motherboard needs to be drilled anywhere between 5,000 to 10,000 holes in order for the circuitry to travel from the top to the bottom of the board. Furthermore, any components that need to be mounted on the motherboard itself, such as sockets or jumpers, also get drilled a hole. Right now, the motherboards are in “plates” that usually fit two separate motherboards. Thus, any process from here until the end of printing is actually working twice.

In the particular 4-layer drilling center we were in, about 40 machines drilled 6 to 12 plates at a time (12 to 24 motherboards). The process takes an hour to complete one cycle, thus generating about 500 motherboards an hour. Since Biloda works on two shifts, a daily yield in this 4-layer facility yields at least 5,000 motherboards a day, or 140,000 per month. In fact, the factory has its own technicians that just sharpen the drill bits all day, everyday! 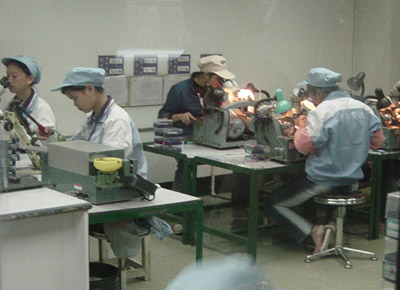 
That seems like a lot for one little factory, but keep in mind that the boards have not gone through any QA yet. A majority of the boards are rejected, and also a large majority of the boards are used for different clients. ECS itself is responsible for three brands, including PC Chips, ECS and Matsonic. ECS targets PC Chips components at the entry level market, while ECS branded components are for the middle grade components. Matsonic is not terribly popular in the US, but all three brands account for enormous OEM market share (over 15% at time of publication). Furthermore, from time to time we got the occasional glimpse of Abit and Shuttle motherboards in various levels of PCB production. While one in seven motherboards might be from ECS, the chances that your motherboard came from Biloda are even higher!