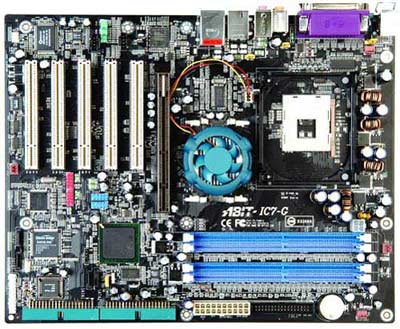 There are a few things that separate the IC7 from the IC7-G. The biggest difference is in Serial ATA support. While the IC7-G comes with an onboard PCI Serial ATA controller from Silicon Image (SI3112A) that controls two SATA connectors, the IC7 is stripped of this feature (the picture above is actually of the IC7-G). The IC7 is not stripped of all Serial ATA support by any means, as ABIT includes the ICH5R South Bridge, which comes with two onboard Serial ATA connectors capable of RAID 0 and RAID 1. There will be some users that'll desire more than the two Serial ATA connectors that the IC7 affords, and so they will undoubtedly go with the ABIT IC7-G. Barring some high-end users, the vast majority of users should do fine just fine with two Serial ATA connectors and the Primary and Secondary IDE connectors, especially since Serial ATA drives are not by any means being shipped in great quantities, nor do they provide a significant performance advantage over IDE drives.

The ABIT IC7 also lacks Intel's PRO/1000CT Gigabit LAN controller that travels through the CSA (Communications Streaming Architecture) bus. In fact the IC7 lacks onboard Ethernet altogether. This is one of the more glaring losses, as there are more and more users connecting to broadband services by the second. Buying an add-in PCI Ethernet card will force you to take time out of your day, while also costing you an additional $9-10.

The final feature the IC7 lacks is not an onboard component but ABIT's convenient Serillel 2 adapter that can convert your existing IDE hard drives' interface into SATA. Though there is a bit of performance degradation, the difference is minute.

Overall the ABIT IC7 keeps the vast majority of components found on the IC7-G. You still get all those rear SPDIF ports as well as a rear IEEE 1394 FireWire port (with the bracket as well). You get the same bundle (minus the Serillel 2 adapter of course) and most importantly the IC7 keeps the same excellent BIOS options for overclocking and performance tweaking. As we will mention in the ABIT IC7-G section, there's an AGP/PCI lock at 96MHz/48MHz and a very high 1.925V Vcore ceiling, adjustable in 0.0250V increments.

Unfortunately the IC7 contains the exact same faults as the IC7-G in terms of layout. The horizontally placed Primary and Secondary IDE connectors force you to twist and weave your IDE cables, and the fact that they're placed below the midsection of the PCB make it even more difficult for the bundled IDE cables to reach the upper bays of many ATX cases. This will cause users to drop the top drive bay for the 2nd or 3rd bay, making the front of your case look quite ridiculous. As we mentioned before, ABIT's 875P series of boards comes with a very loud North Bridge fan, which is certainly an annoyance if you desire a silent system. Thankfully this will be replaced with a quieter unit in the near future.