Microsoft has stuck with it’s tried and tested Marvell AVASTAR 802.11ac wireless adapter for the Surface Studio, and they’ve been using this NIC for quite a while on the Surface devices, so this isn’t a surprise. Over the years, the experience with the Marvell adapter has not been the best, although recent driver updates have both improved performance, and made the adapter less prone to not finding networks to connect to.

How times have changed. The Surface Pro 4 in the above graph has the same network adapter, but you can see how far Marvell has come with the drivers. It has been solid so far in regards to connections as well, and hopefully that doesn't change. The Surface Book, with the same adapter, sometimes needs to be restarted to fix the networking even to this day.

The Surface Studio also has the Intel I219-LM Gigabit Ethernet adapter, for those that prefer a wired network connection. It does provide a better experience if you do have a cable handy, since even the best 3x3 802.11ac cards can’t really compete with Gigabit wired.

When it comes to audio, Microsoft had to put some extra work into the Surface Studio to ensure that the audio experience wasn’t impacted by too severely by moving the display. A lot more engineering went into this than you would expect, and the Surface Studio features a total of seven speakers. Apparently the Surface team decided to go big, or go home, so they fit four speakers into a downward firing grille at the bottom of the display, plus there are two additional speakers in the base. The final speaker is a subwoofer to help out on the low frequencies. 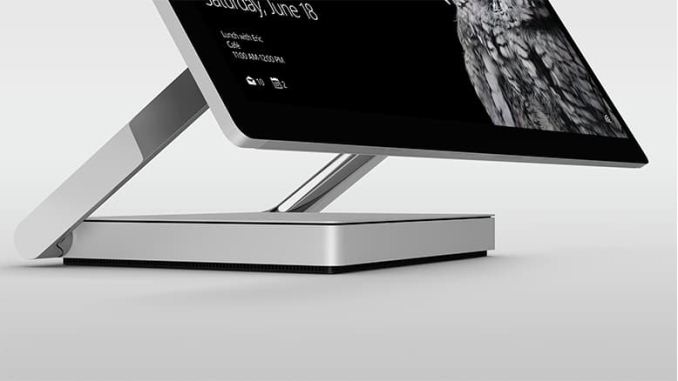 Four of the Studio speakers are on the bottom edge of the display, and another two plus a sub are in the base

The sound quality of the Surface Studio is far better than you would expect for a small, tightly packed device like it is, and having the speakers in multiple locations helps out when the display gets moved into the drafting mode, since the ones on the base can now chip in to make up for the speakers on the display no longer as optimally oriented.

The system gets quite loud, and I measured a maximum of 88 dB(A) when playing music, and the sound was not distorted even at maximum volume. The subwoofer definitely helps out too, with decent frequency response even on the low end of the scale. It’s not a home theater in a box by any means, but it would likely be enough for many people.

Packing a PC into a space the size of the base of a Surface Studio, especially with a GTX 980M inside, is quite a challenge, but ensuring that the system does not overheat, even under load, is often too much for small devices like this. There are two fans inside the Surface Studio, and they vent out a row of slots in the black plastic underneath the computer.

When discussing the cooling with the Surface team, they were very proud of the work they had done there, especially the amount of heat dissipated per dB of noise. In order to test the thermal capabilities of the Surface Studio, the Tomb Raider benchmark was run continuously at 1920x1080 Ultra settings, which loads the GPU up to 100%. 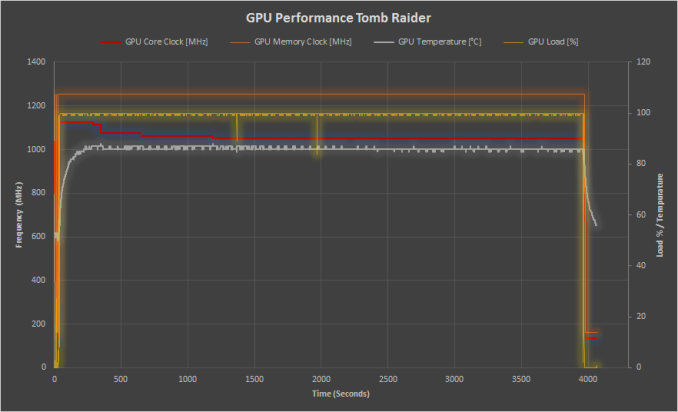 The cooling system is very good in the Surface Studio, despite the significant heat generated by the GTX 980M. The system was able to run for five minutes at maximum boost clock of 1126 MHz before the GPU hit the thermal limit of 87°C, at which point it reduced its frequency to 1050 MHz over time, and stayed right there for the rest of the test. Perhaps the most impressive bit is that even with the GPU at 100% load, the sound pressure level with a meter over the keyboard, was just 46 dB(A), and the sound frequency is low enough that it isn’t bothersome. Microsoft did their homework on the cooling system, and the Surface Studio is solid under load.

Where it is let down though is at idle. Despite being very quiet under load, at idle, the system still produces 37.5 dB(A), and the fans constantly run. The CPU and GPU idle around 39°C, which is very reasonable, but the sound is always there. It’s not loud, but it’s always there. For me, desktop systems should be almost silent under light workloads, but that’s not the case on the Studio, which is disappointing.

The other issue on the noise side, at least on this review unit, is that there is a small amount of coil whine when the system has the display off, but it’s not yet sleeping. Most likely, this is the power supply, which is also built into the base of the Studio, coping with the reduced power demand since it isn’t driving the display backlight anymore. Once it goes to sleep, it’s not an issue, but the system does wake up periodically to update email, and the like, so even if it is sitting there asleep on the desk, occasionally the coil whine will come back, and the fans kick in.