Hyper-Threading - It's getting Hot in Here

Obviously if you're running your CPU's execution units at higher utilization levels than normal your CPU is going to produce more heat. Intel states that with HT enabled the 3.06GHz Pentium 4 produces about 6% more heat, but just to make sure we ran our own tests on the CPU:

As you can see here, running with HT enabled resulted in a 6.5% higher peak temperature during our DiVX tests; a reasonable increase but nothing to get too alarmed about.

In order to deal with the added heat introduced by Hyper-Threading and the higher clock speed, Intel moved to an even larger heatsink/fan for the 3.06GHz Pentium 4: 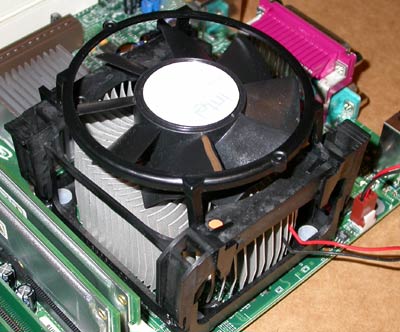 Interestingly enough, this fan is actually one of the first retail Intel fans that's actually somewhat noisey. It is still much quieter than most 3rd party fans but it is definitely loud for a Intel retail solution.

The first three heatsinks are Pentium 4 solutions in newest to oldest order (left to right)
The heatsink on the end is the latest AMD solution for the Athlon XP.