For the first time since late 2008, I went back to using a machine where a hard drive was a part of my primary storage - and I didn’t hate it. Apple’s Fusion Drive is probably the best hybrid SSD/HDD solution I’ve ever used, and it didn’t take rocket science to get here. All it took was combining a good SSD controller (Samsung’s PM830), with a large amount of NAND (128GB) and some very aggressive/intelligent software (Apple’s Core Storage LVM). Fusion Drive may not be fundamentally new, but it’s certainly the right way to do hybrid storage if you’re going to do it.

It seems that Fusion Drive is really made for the user who doesn't necessarily have a ton of applications/data, but does have a reasonable sized media collection. For that user, Fusion Drive should be a reasonable approximation of a well managed SSD/HDD setup with your big media files going to the HDD and everything that you launch frequently living on the SSD. I’m always going to ask for a larger cache, but I do believe that 128GB is a good size for most client workloads and usage models today. For me in particular I’d probably need a 256GB cache for Fusion Drive to win me over, but I understand that I’m not necessarily the target market here. 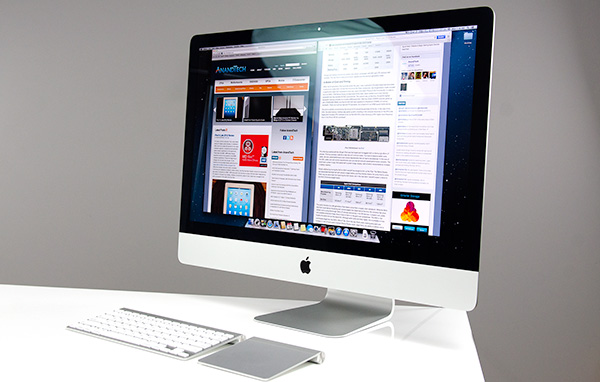 The real question is whether or not it’s worth it. I’m personally a much bigger fan of going all solid state and manually segmenting your large media files onto HDD arrays, but perhaps that’s me being set in my ways (or just me being right, not sure which one). Fusion Drive doesn’t do anything to mitigate the likelihood that a hard drive will likely fail sooner than a good SSD, whereas if you go with an internal SSD and external (Thunderbolt or USB 3.0) HDD RAID array you can control your destiny a bit better. Unfortunately, in situations where Fusion Drive is a choice, you don’t often have that flexibility.

On the iMac, Apple limits your options quite a bit. You can either buy a hard drive or the Fusion Drive on the 21.5-inch model, there’s no standalone SSD option. There the choice is a no-brainer. If you’re not going to buy your own SSD and replace the internal HDD with it (or try to see if OWC’s rMBP SSD fits), then the Fusion Drive is absolutely right choice. You’re paying handsomely for the right ($250 for 128GB of NAND is very 2011), but if you’re not willing to crack open the iMac case this is really the only way to go.

For the 27-inch iMac the decision is similarly difficult. Apple does offer a standalone SSD option, but it’s for a 768GB model that will set you back $1300. All of the sudden that $250 Fusion Drive upgrade sounds a lot more reasonable.

On the Mac mini side the decision is far simpler. The Fusion Drive is only available on the $799 configuration (for $250) but so is a 256GB SSD upgrade for $300. As long as you’re ok with using an external hard drive for mass storage, here I’d go for the big standalone SSD. The usual caveat applies: this  is only true if you’re not interested in cracking open the mini yourself and using a 3rd party SSD.

To make things simpler, I made bold the options I'd choose given Apple's current lineup in the table below. Note that this is still assuming you're not going down the DIY route (if you do go down that path, buy the biggest SSD you can find and rely on some external mass storage for everything else):

I am curious to see how long of a roadmap Fusion Drive has ahead of it. Will NAND get cheap/large enough that even the iMac can move to it exclusively? Or will we end up with systems that have more than enough NAND to easily store everything but large media files for even the most demanding of power users? In less than a year Apple could double the size of the NAND used in Fusion Drive at no real change to cost. I suspect another doubling beyond that would be necessary to really make Fusion Drive a one size fits all, but then we're talking ~2 years out at this point and I don't know how static everyone's usage models will remain over that period of time. Go out even further in time, to the post-NAND era and there are some really revolutionary things that can happen to the memory hierarchy altogether...