In our earlier look at Thunderbolt under Windows I didn't have a working Pegasus driver to really push the limits of the interface's bandwidth. With that now changed, I went to work. I started by pulling out all of the hard drives from the Pegasus R6 and installed four SSDs. I didn't have four identical drives so I threw in a mix of SF-2281 based drives and Vertex 4s. The lowest common capacity was 240GB so the resulting logical RAID-0 drive I built was just under 1TB in size. I then ran a 128KB sequential read test using Iometer to see what sort of performance I could get from the setup: 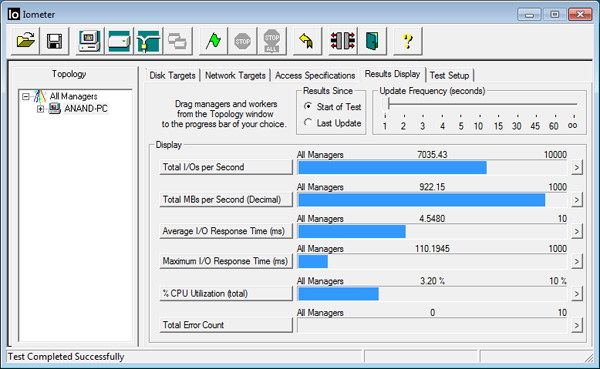 With this configuration, I achieved a very respectable 922MB/s. Note that the fastest speed I ever attained under OS X was 1000MB/s so we're not all that far off the peak. To try and move the needle a little further I hooked up the SSD based LaCie Little Big Disk and performed a 128KB sequential read across both the LBD and the SSD equipped Pegasus: 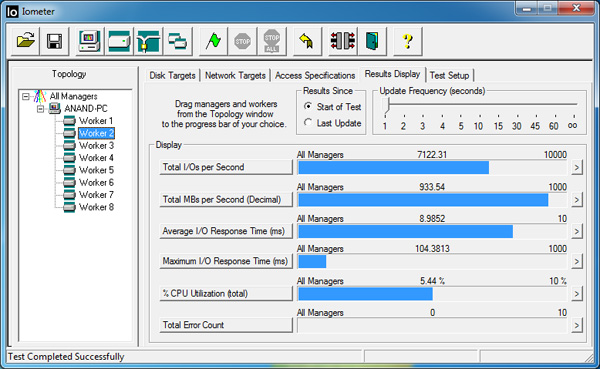 Performance moved up a bit to 933MB/s but it's clear that we should've seen a bigger increase in performance from adding another two SSDs to the chain. The fact that performance didn't go up tells me that we're reaching the limits of the interface.

As a last ditch effort I added two more SSDs to the Pegasus R6 chassis, a pair of 128GB Samsung SSD 830s in RAID-0. I repeated the 128KB sequential read test, but now across all four drive targets (2 in the LBD, and 2 RAID arrays in the Pegasus R6): 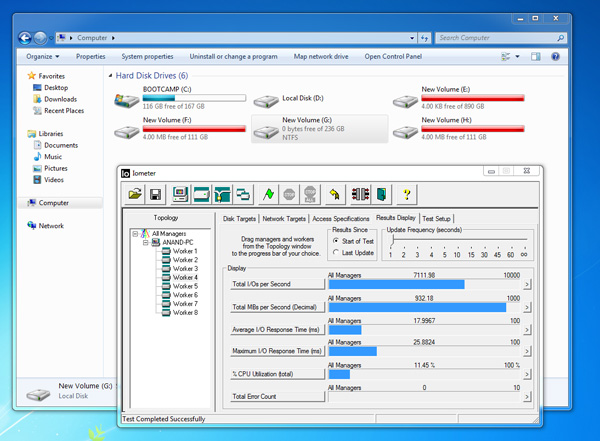 Unfortunately, performance didn't change. It's safe to say that on a single Thunderbolt port you can get just under 7.5Gbps of bandwidth, in one direction, to a chain of devices. Each Thunderbolt port should have two channels however; the second should allow DisplayPort traffic to be carried without impacting performance. To test this theory I repeated the test but with Apple's Thunderbolt Display in the chain. To drive the 27-inch 2560 x 1440 panel at 60Hz you need around 7Gbps of bandwidth (more if you take into account overhead). With the display connected I repeated the transfer test: 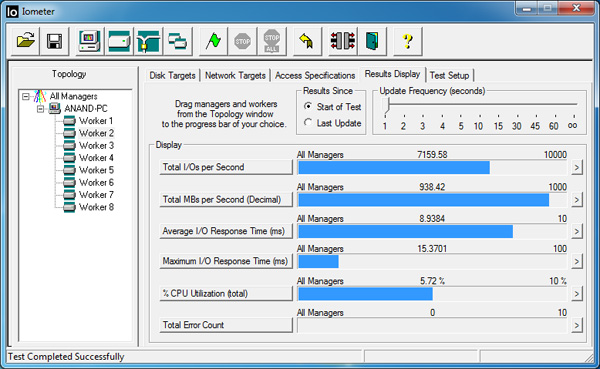 Performance actually went up by a few MB/s, but basically remained unchanged from the earlier 7.5Gbps peak. While I never was able to hit the 8Gbps I got under OS X, that was with the very first iteration of Thunderbolt support under OS X as well as from Promise. It's entirely possible that further tuning/firmware updates have limited performance a bit since then. Either way, it's safe to say that Thunderbolt under Windows is capable of the same class of performance we've seen under OS X.

Pushing video out to the display while pulling in data from external storage devices is actually the best case scenario for Thunderbolt, but what happens if we're sending traffic out on both channels? I conducted the same test with the Thunderbolt Display attached but this time I ran a 128KB sequential write to the attached SSDs: 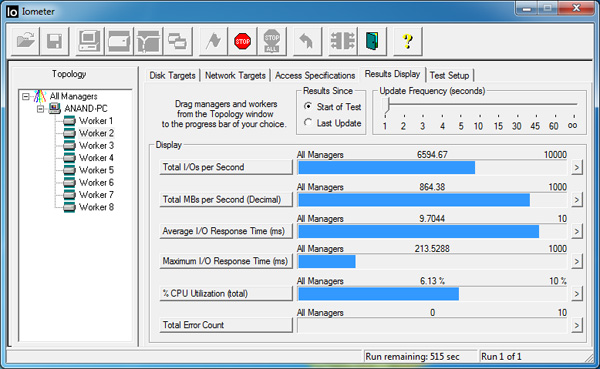 There's a bit of a performance drop (~6.9Gbps vs. 7.5Gbps) but it's unclear whether this is due to lower SSD write speeds or upstream bandwidth limitations for a single Thunderbolt port.

Armed with the right drivers, Promise's Pegasus helped prove that Thunderbolt can be nearly as fast under Windows as it is under OS X. Similar to what we saw under OS X, around 7.5Gbps isn't tough to achieve over a single Thunderbolt port. There's also no significant performance impact seen when driving DisplayPort over the same interface.

The first Thunderbolt equipped motherboards are expensive, but that's mostly a function of Thunderbolt being paired with the absolute highest end models. Over time, I'd expect more ubiquitous deployment of the interface—although it's not clear how long that would take. 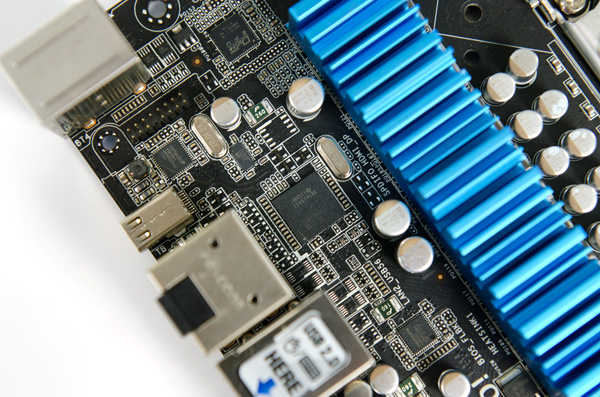 Intel's certification program for Thunderbolt on Windows definitely improves the behavior of devices and generally makes the interface OS agnostic. Unfortunately, the reliance on the certification program for proper functionality under Windows means the interface will get off to a rough start on its new platform. As of today, there are no publicly available certified Windows drivers for Thunderbolt devices. This will change, hopefully over the course of the next quarter, but we still need to play a bit of the waiting game. 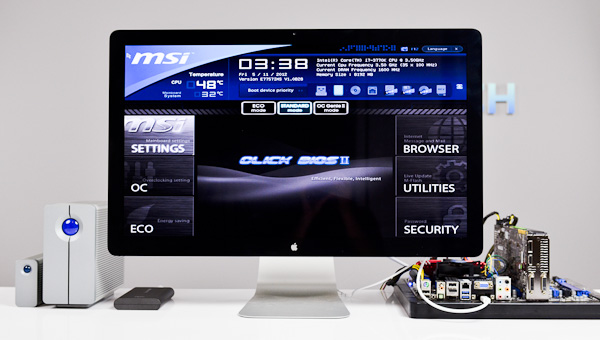 We also need more Thunderbolt devices. Apple's Thunderbolt Display is a great example of what you can do with Thunderbolt, but without official Windows support we're left waiting again. 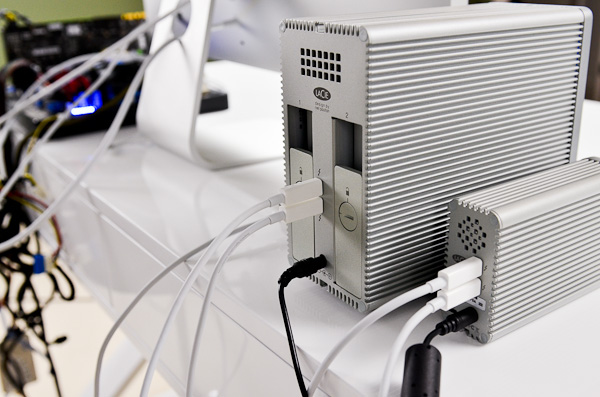 Despite the teething problems, I am glad to see Thunderbolt finally arrive on Windows PCs. While there's an obvious fit for mobile, I do believe that even desktop users can benefit from Thunderbolt. At the bare minimum, it can simplify external cable management with only a single cable carrying Ethernet, audio, USB, DisplayPort, etc... from your PC to your Thunderbolt hub and/or display. The fact that it can also move high performance storage out of your chassis might also enable smaller/more interesting desktop form factors. There's an obvious fit with all-in-one designs but even things like mini-ITX become a lot more flexible with Thunderbolt.