Apple can build touchscreen devices, I wasn't worried about that aspect of the iPad. Although surprising was the fact that the iPad's screen feels just slightly less responsive than the iPhone's. I'd say it's somewhere in between the Nexus One and the iPhone. It's possible that it's harder to build a uniformly responsive capacitive touch screen at such a large size.

What I was worried about was the keyboard. The iPhone's keyboard is difficult to adjust to but it can be done. You can hold the iPhone the same way you would a smartphone with a physical keyboard and all you lose is tactile feedback. Throw in some intelligent auto correction software and you're good to go.

This is one aspect of the iPhone experience that doesn't translate well. With the iPad you lose the tactile feedback of a physical keyboard, but you also lose the ergonomics.

The iPhone's keyboard is roughly the size of your average smartphone keyboard, but the iPad's keyboard is about 60% the size of a standard keyboard in portrait mode, and 85% in landscape. Thankfully Apple has done a good job of not scaling down key size and spacing, pulling a page from the iPhone handbook and just using different virtual keyboards depending on the app or what mode you put the keyboard in:

Hit the #+= key and you get this - note the redo button

The iPad keyboard works just like you would expect a virtual keyboard to work. No, not like the virtual keyboards you’re used to, but instead like a virtual representation of a real keyboard. If you know how to type on a regular keyboard, you’ll quickly be able to do the same on the iPad. The keyboard learning curve is definitely flatter than on the iPhone but it still exists. Touch typing is very possible.

The problems actually have to do with the ergonomics of the device itself. Put a notebook on your lap and you rest your wrists on either side of the trackpad as your fingers drape over the keys. You can't do this on an iPad. The bottom of the keyboard is less than an inch away from the edge of the device. In this sense it’s kind of like using a tiny netbook.

For typing, the ideal position is with the iPad flat on a desk with your wrists resting on the desk as well. It's akin to writing in a notebook so it should work well for students. It's still not as comfortable as using a laptop but its passable. 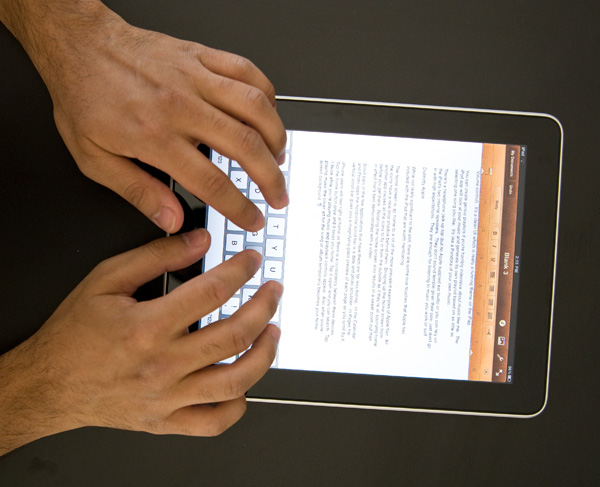 Ideal typing position on the iPad

Where the ergonomics really fail is if you don't have a desk to support your wrists with. Then you've got to either hold the device with one hand and peck at it with another, or do some uncomfortable stuff with your lap. 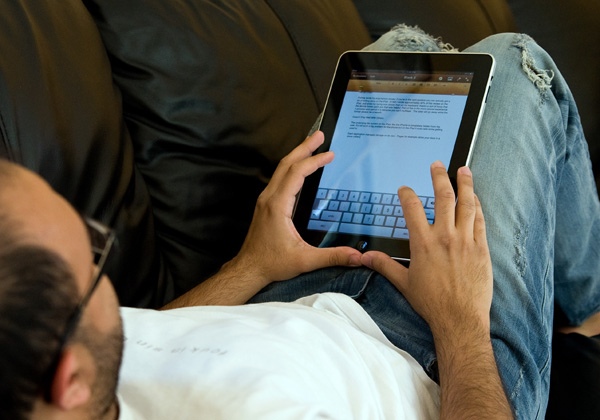 Note what I'm doing with my thumbs, that's the only way to get the iPad to stop sliding down my legs

You can actually hold the iPad with two hands and use your thumbs to type on it like a giant smartphone. You won’t last long doing this but it’s fine for entering in web addresses, Google searches or writing a short email response. The same holds true for holding the iPad in one hand and typing with the other. It works, but isn’t suitable for long use. 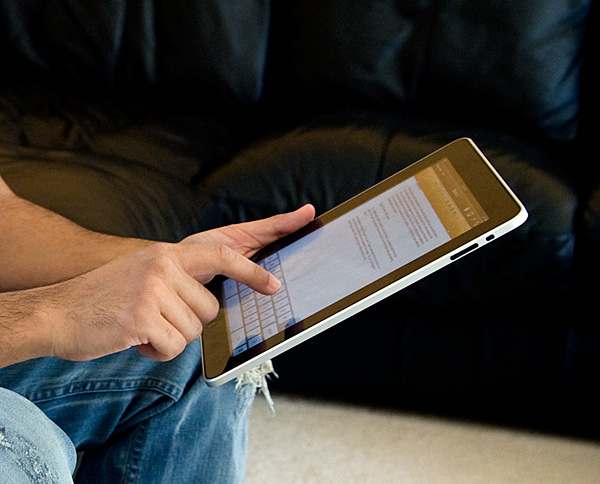 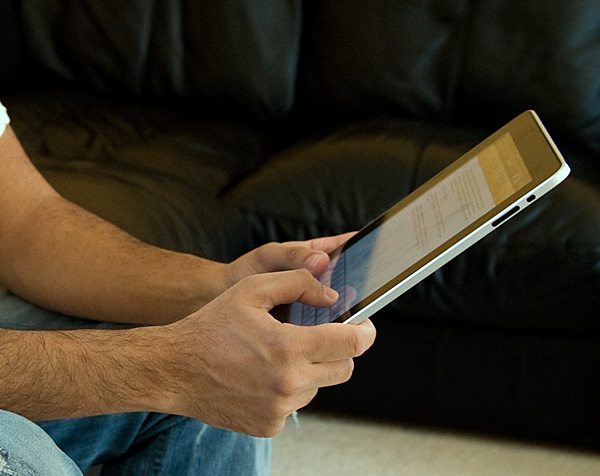 With it resting on your lap you can’t lay as far back on a couch as you’d like, but you don’t have to be totally upright to use the iPad comfortably. There is a happy medium, but it’s just not quite as relaxed as I’d like it to be. 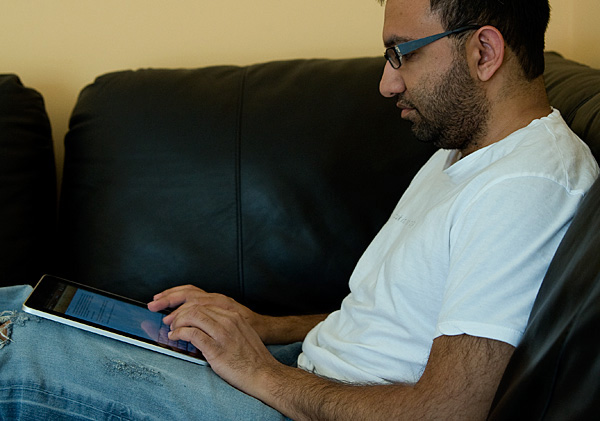 Putting aside my ergonomics issues, once you figure out what works best you can actually get a lot of writing done on the iPad. In fact I wrote approximately 40% of this review on the iPad, and while my typing was slower than on my keyboard, the experience was a nice break from the traditional keyboard/mouse setup.