Remember Elemental? It’s the company that put out Badaboom, the world’s first GPU accelerated H.264 video transcoder built using CUDA. NVIDIA was particularly excited about Badaboom as it finally gave NVIDIA a consumer-level CUDA application to point to when making the argument of why its GPUs were better than both ATI’s GPUs and Intel’s CPUs alone. 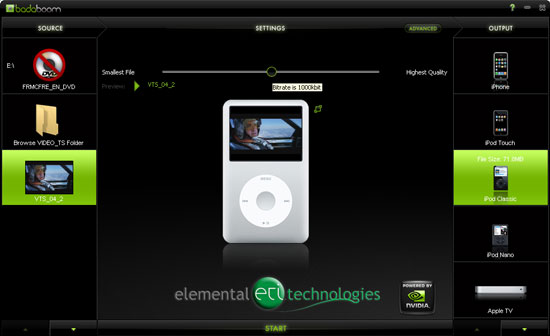 Unfortunately, the beta release of Badaboom needed some work. It didn’t do anything well, at all. After that original Badaboom review I met with Sam Blackman, Elemental’s CEO and we went through the list of things that needed to be fixed.

I should give credit to Mr. Blackman, normally whenever we post any sort of a critical review of any product, the company is fiercely upset with us. I argued with Intel PR for years over our Pentium 4 reviews, AMD felt our review of the Radeon HD 3870 was unfair, and if we don’t mention PhysX as a feature advantage of its GPUs then NVIDIA gets a little emotional. As harsh as the original review was however, Sam wasn’t irrationally upset, I believe his exact words were “that was harsh” and then it was straight to “what can we do to make it better?”.

It’s Sam’s attitude that was reflected so greatly in what became Badaboom 1.0.

The changes were sweeping, now gone is the Pro version, which is welcome given that the Pro version was anything but that. Elemental is instead only focusing on the consumer version and will be rolling in features into this version over time.

The initial consumer release was only supposed to support up to 480p output files, while the new 1.0 release can do up to 720p (the old “pro” version supported up to 1080p). The 1.1 release due out in the next few days will add 1080p support. While originally being slated for use in the Badaboom Pro, AVCHD and HDV input formats are now both a part of the $29.99 consumer version.

All in all, killing off the pro version and folding mostly everything into the consumer version made a lot of sense.

Elemental did add support for Dolby Digital audio input, although DTS is still being worked on. The only audio output format supported is still AAC-LC.

The total sum of all of this is that Elemental’s first version of Badaboom now has a focus, a very specific one, but it gives us a target to shoot for. This isn’t an application that you’re going to use to backup your Blu-ray collection, it’s not even very useful for backing up your DVDs, but what it can do very well is transcode your DVDs for use on a portable media player like an iPhone or iPod.

The biggest problem with the previous version of Badaboom was that it couldn’t do anything right. I tried transcoding Blu-rays, DivX files, chimpanzees, DVDs, and each input file had some sort of quirk associated with it. Even taking a simple DVD, which Badaboom was supposed to support flawlessly, and transcoding it sometimes left me with an unusable output file of the wrong frame rate.

Focusing Badaboom’s attention, Elemental now made one thing work very well: DVDs. Point Badaboom at an unencrypted VIDEO_TS folder or a DVD disc/image and it will now perfectly rip the DVD to the appropriate resolution.

I should mention that DRM is rearing its ugly head here once more as Badaboom won’t automatically convert an encrypted DVD. Thankfully Slysoft’s AnyDVD simply running in the background is enough for Badaboom to transcode any DVD. If you haven’t used AnyDVD, I highly recommend it - it’s a great way of getting rid of encryption on both DVDs and Blu-ray discs.

Elemental also fixed the weird image quality issues, the output no longer gets scaled out of its correct aspect ratio when downscaled. Hooray.

Badaboom obviously does very well with a fast GPU, but the CPU requirements are also reasonably high. Keeping the GeForce GTX 280 fed actually ate up 50% of the CPU power of our Core 2 Quad Q9450 in our tests, it seems that Badaboom won’t scale beyond two cores.

The problem is that Elemental and NVIDIA make the argument that using the GPU to transcode video frees up your CPU to do other tasks while you’re doing this. The reality is that this is only true if you’ve got four cores, otherwise your dual-core CPU is just as pegged as it would be if you were doing a CPU-based video transcode. The difference here being that the transcode is going a lot faster.

While NVIDIA wants you to spend less money on the CPU and put the savings towards a faster GPU, the correct approach continues to be buying a decent CPU and a decent GPU, even with GPU accelerated video encoding. If you’re going to be doing a lot of video encoding, a quad-core CPU is still a good idea regardless of whether you’re doing your encoding on the GPU or not.