With outstanding performance at stock speed, we pushed the Arctic Cooling HSFs in our performance scaling tests to see if these air-coolers deliver similarly impressive performance when overclocking. As cooling solutions do a better job of keeping the CPU at a lower temperature, it is reasonable to expect the overclocking capabilities of the CPU will increase as cooler performance increases. In each test of a cooler, we measure the highest stable overclock of a standard X6800 processor under the following conditions:

Memory is set to Auto timings on the P35. This removes memory as any kind of impediment to the maximum stable overclock. As FSB is raised the linked memory speed increases in proportion. For this reason, we maintain memory speed as close as possible to CPU strap settings to prevent memory becoming an issue in CPU testing. This means 3.33GHz uses a 333 strap and runs 10x333, 3.73 uses a 333 strap and runs 11x339, and 3.90 GHz is a 333 strap and 354x11. The stock speed test is a 266 strap and 11x266. We may move in the future to a 3.0GHz stock speed with a 333 strap and 9x333 settings for complete consistency, but since we are not measuring raw computer performance in our cooling benchmarking this becomes a moot point. We use the same processor in all cooling tests to ensure comparable results. 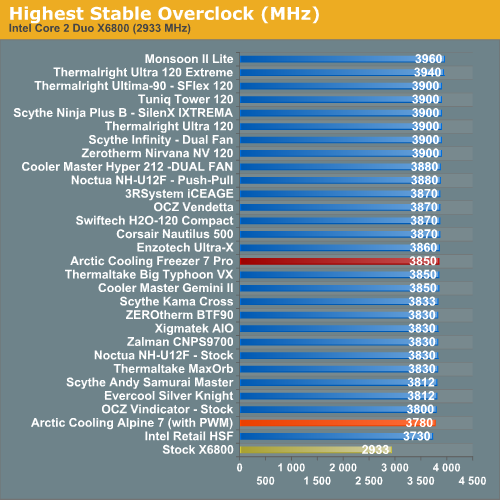 The Freezer 7 Pro is rated at 130 watts dissipation and it lives up to that level of performance, topping out at 3.85GHz. This does not challenge our top coolers, which can dissipate more than 150W - or even 165W in the case of the Thermalright Ultra 120 eXtreme. Nonetheless, it is very competent performance for a cooler selling for less than $25. Many other coolers we have tested that sell for much more than these two coolers do not perform as well in overclocking.

Those who expected the Alpine 7 family or Freezer 7 Pro might give our top performing coolers a run for the top will likely be disappointed. However, they shouldn't be disappointed with either cooler's overclocking performance. It is very clear Arctic Cooling knows how to design and rate their coolers for performance. Both the Alpine 7 and the Freezer 7 Pro are fairly rated and outstanding performers in their respective price classes.

Performance scaling charts for the Arctic Cooling pair use a scale with zero on the bottom and 75C on the top. Keep in mind that the lower line is the best performance in this presentation of the data - lower temperatures represent better performance.


The Alpine 7 performance scaling at idle is impressive. It significantly outperforms the Intel retail cooler, which would be the closest competitor. Surprisingly it also outperforms most of the mid-range coolers we have tested to the point where it tops out at 3.78GHz. The Freezer 7 Pro is even better, with scaling close to the top guns to its max speed of 3.85GHz.

Comparing cooling efficiency of the Arctic Coolers under load conditions to the retail HSF and other recently retested CPU coolers doesn't change the picture much. Load testing can be very revealing of a cooler's efficiency. A basically flat line, particularly form 3.73GHz upward, indicates the cooler is still in its best cooling range. A rapidly rising line indicates a cooler is nearing the end of its ability to cool efficiently. Lines that parallel the best coolers over a range of values show the coolers provide similar cooling performance.


Under load test conditions, the limited performance of both these coolers is more noticeable. Top coolers we have tested exhibit a shallower slope, where the Alpine 7 and Freezer 7 Pro both have very steep curves in load performance scaling. Results at 2.93GHz and 3.33GHz are among the best test results so far, but the Alpine 7 drops rapidly into the entry/mid performance levels at 3.73GHz and its top of 3.78GHz. Keep in mind that this is a very low-priced cooler and you can get more excited about load scaling, because performance is still significantly better than the stock cooler.

The Freezer 7 Pro fares better under load, as might be expected of a small heatpipe tower. Load performance matches the top tier until around 3.5Ghz. Load scaling then drops into the mid-range area from 3.73GHz to the top for this cooler of 3.85GHz. This is still excellent performance for a cooler in this price range.