by Anand Lal Shimpi on August 19, 2005 12:54 PM EST
34 Comments | Add A Comment
34 Comments + Add A
Comment
When I first started using Macs alongside my PCs I was quickly reminded of how similar the two platforms had become in terms of their actual hardware.  Honestly, with the exception of the PowerPC CPU and custom chipset/motherboard, the inside of my first G5 looked hardly any different than a very well built PC.  It used a plain old SATA hard drive, a DVD drive, the same DDR memory and even the same GPUs.

Of course, there were some limitations; I couldn't just throw in the gigabytes of DDR memory that I had laying around. I needed G5 compatible modules that adhered to Apple's strict SPD programming requirements.  But after locating some, I could use them on both Mac and PC platforms, albeit their slower timings made them mostly undesirable for use on any of my PC test beds.  The use of Mac compatible video cards wasn't as multifaceted, however. Although the Mac cards shared the exact same GPUs that I had been used to on the PC side of things, the cards were sometimes physically different and always featured a Mac-only firmware.  You could stick a Mac card in a PC, but it wouldn't POST, not without a firmware reflash; and the same applied in reverse as well.

It turns out that making a universal Mac and PC video card isn't that tough. It's just that there are some implementation details that had to be worked out before doing so.  One of the biggest problems ended up being Apple's powered ADC connectors that were featured on the previous generation of their Cinema Displays.  The ADC standard calls for video, USB as well as power for the monitor to be sent over a single cable from the video card to the monitor.  Generally speaking, drawing enough power to drive a 23" Cinema Display takes a little more than what can be delivered over a standard AGP slot, especially if the slot is tasked with powering the GPU as well.

Apple's solution to the problem was to outfit ADC enabled cards with a separate connector to feed a 25V line to power any monitors and USB devices connected to them over the ADC port.  The problem is that no PC motherboards feature support for this additional connector and an ADC connector isn't too useful for most PC users.  But with Apple's move to DVI for their latest monitors, suddenly there's a lot more in common between PCs and Macs and their video card requirements.

NVIDIA's GeForce 6800 Ultra DDL was essentially identical to the PC 6800 Ultra card, but without the need for external power, so the card featured a considerable amount of additional circuitry to pull power from the motherboard instead.  But other than that difference, the Mac card looked like just any other dual-DVI PC graphics card, except it would only work in G5s.

So, when ATI set out to make a retail 256MB upgrade product, they figured the requirements had conspired in favor of bringing a Mac and PC compatible card to the market; thus, the ATI Radeon 9600 Pro Mac & PC Edition was born. 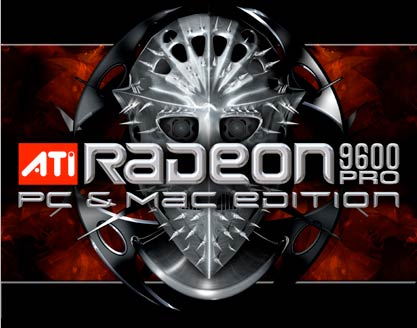