I would say the average Ultrabook has around 50 Wh of battery capacity. Some have a bit more, and some have a bit less, but 50 Wh would be a good ballpark figure. The Surface Book has a 70 Wh battery, split into 18 Wh in the Clipboard, and 52 Wh in the base. Combined, it gives the Surface Book more battery capacity than any other Ultrabook. However, as I’ve just discussed in the display section, Microsoft has a high resolution panel that is also based on a traditional amorphous silicon TFT which may impact the battery life.

Since the Surface Book includes a detachable Clipboard, the battery tests have been done with the Surface Book both as a tablet and a notebook. The tablet portion of our testing is with the device in Tablet Mode with the screen detached, leaving just 18 Wh of battery capacity. The Surface Book is intended to be used as a laptop first and foremost, but it’s still important to see what it can deliver away from it’s keyboard base. As always, all of our battery life tests are done with the display at 200 nits, and using the Microsoft Edge browser.

Since we have received both the Core i5-6300U model, as well as the Core i7-6600U model with the discrete NVIDIA GPU, both devices have been put through these tests.

Battery life of the Clipboard is about what you would expect. With just 18 Wh of capacity, and a full Ultrabook inside the display, there is no way it would get the 10 hours that we would expect of an ARM based tablet. The Core i7 model has less battery life, which makes sense since its base frequency is a bit higher and overall power consumption should be a bit higher even with standard chip binning from Intel. Video playback is very close on both though, which would be expected since the video is offloaded to fixed function hardware in Skylake.

On the notebook side, we have two tests. The light test consists of loading four web pages per minute, and can be heavily impacted by display power draw. The CPU mostly sits idle during this test, expect for the brief bursts of work to load the pages. The heavy test ramps up the number of pages loaded, adds in a 1 MB/s file download, and has a movie playing. 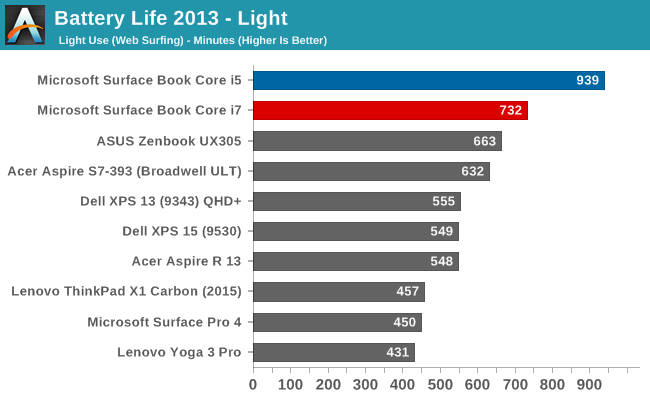 Something amazing happened when I ran the Core i5 Surface Book through our light test. It set a new record for battery life. The amazing part of this is that it did it with a high resolution display, which normally impacts battery life quite a bit. For some contrast, the Dell XPS 13 was our previous battery life leader, but it was the 1920x1080 model. The 3200x1800 version, as seen in the graph above, was quite a bit less. The Core i5 Surface Book got 15.6 hours of battery life in this test. Yes, it was helped by a larger battery, but it was still a very impressive result. The dGPU + Core i7 model took a big hit here, coming in over three hours behind. Without dissecting the device and measuring power draw at each component, it’s tough to lay the blame on any one piece of the puzzle, but it has more RAM, a dGPU with GDDR5 memory (though this should be completely powering down when not in use), and a faster CPU. Any one could be to blame, or a combination of all three. Despite the lower score, at over 12 hours it still did very well on our light test. 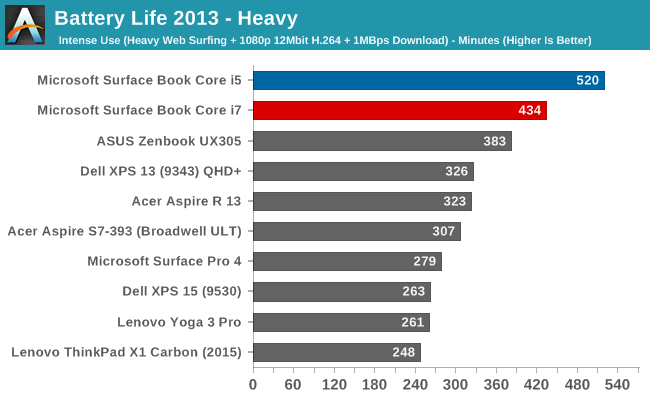 The heavy test brings a lot more components into play, making the display power draw a smaller part of the picture. Here we see both the i5 and i7 models doing very well again, but once again the i5 version scores a lot higher. Both models can offer all day battery life, but if outright mobility is a concern, the i5 outperforms the i7 on battery life.

Next, let’s take a look at the platform efficiency, and remove the large 70 Wh of capacity from the equation. 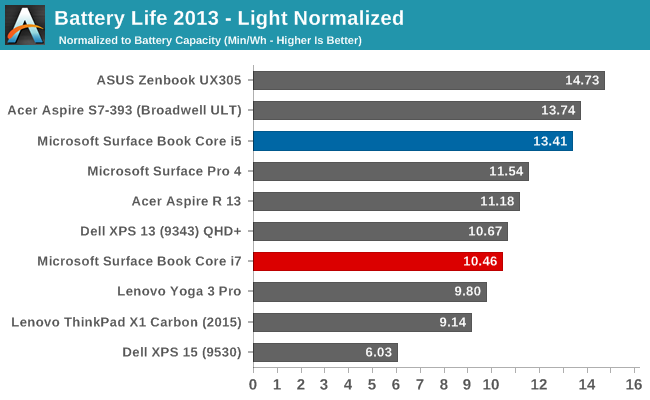 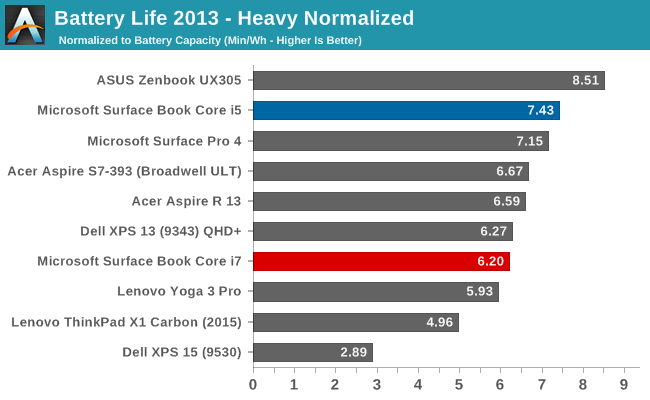 While not the outright leaders in efficiency, the Core i5 Surface Book is the class leader when compared against other high DPI devices. The Core i5 Surface Book has even better efficiency than the Surface Pro 4, despite the Surface Pro 4 using an IGZO panel. On the heavy test, the Core i7 falls back a bit in both tests, but still has a good result.

Surface Book is configured to use Connected Standby, which means that it can pull in app updates and push notifications even when it is sleeping. Out of the box, this is a mixed blessing, since the Surface Book has some issues with Connected Standby at the moment. It is supposed to hibernate after a couple of hours, but that doesn’t always happen, and there seems to be an activity/power drain issue when in sleep, since the Surface Book can get pretty hot when it’s closed. These are serious bugs that mar the experience. You can’t just trust that shutting the lid is going to put the machine to sleep, so if you close the lid and come back the next day, you are going to be welcomed by a dead battery. This is a well known issue, so I would expect a fix soon, but it’s a serious problem with the Surface Book that needs to be pointed out.

With 70 Wh of battery, charge times might be something that will be an issue, so I’ve tested both the Core i5 and the Core i7 models out with their respective adapters that come in the box. Since the Core i7 model includes a GPU, the AC adapter that is supplied is about twice the output of the standard version. The Core i5 comes with a 30 W charger, and GPU models come with a 60 W charger. It’s very difficult to tell which is which, but the 60 W version is slightly thicker, and the charging light on the Surface Connect port has different lighting. The low wattage version has a light that points away from the laptop when connected, and the higher wattage charger has lights that point up and down. You can technically use either charger, or even the Surface Pro 3 or 4 charger, but if you are using the GPU with a 30 W charger, the battery will slowly be depleted since it won’t be able to keep up with demand.

Since there are two batteries, I expected to see the tablet battery charged first and then the base, but that’s not actually what happens. Both are charged simultaneously. 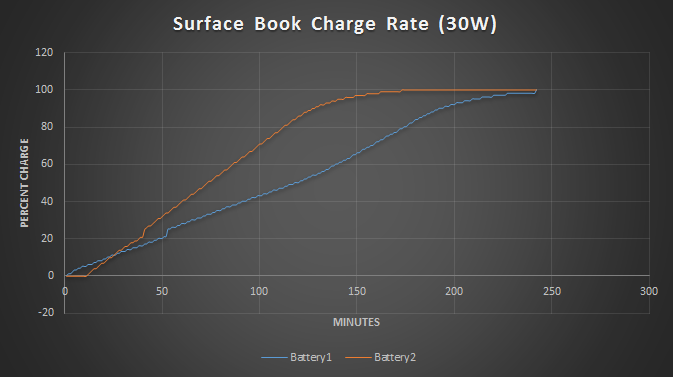 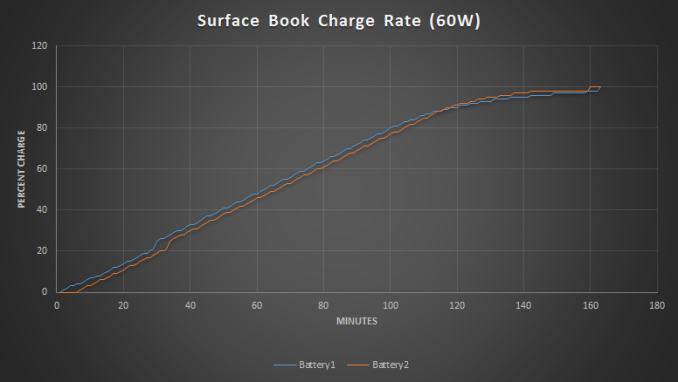 You can see that the 60 W charger on the Core i7 can charge both batteries at the maximum rate simultaneously, but the 30 W charger that comes with the Core i5 charges the smaller tablet battery at maximum first, and when it’s full, sends the rest of the power to the base. It results in a longer charge rate for the non-GPU version. 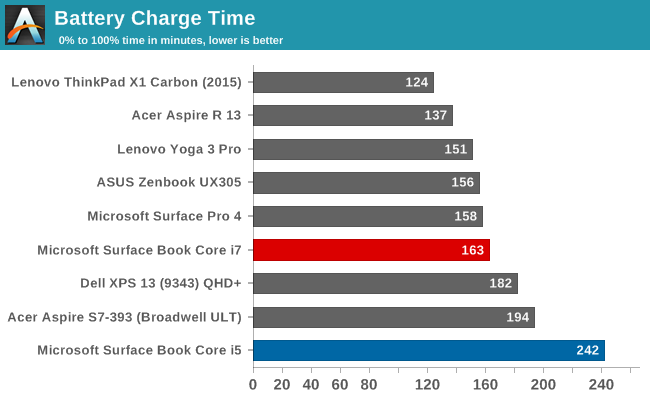 Thanks to including a large 60W power adapter by default, the Core i7 + dGPU version wins by quite a bit, with the non-dGPU model taking nearly four hours to charge to 100% on both batteries. It kind of makes up for that with great battery life, but if you are someone that travels a lot, it may be worth investing in the higher wattage adapter for the non-dGPU version.