Battery life is something that has changed drastically in just the last several years. Improvements to all parts of the typical laptop have contributed to some fairly massive increases in battery life. With the XPS 13, we have a unique opportunity. Not only is this our first Broadwell-U based notebook to be reviewed, but this is also the first chance we have had where we can test two virtually identical computers, but with different resolution displays.

We have known for some time that higher resolution, and especially higher pixel density displays, can have a significant impact on battery life, but with these two laptops configured virtually identically except for the display, we can get a good look at the trade-offs between a super crisp display, and one that perhaps does not have quite the visual fidelity, but could perhaps increase the usable time away from the power outlet. Dell is claiming that the FHD (1920x1080) version of the XPS 13 can get over 15 hours of battery life, and the QHD+ (3200x1800) version is capable of over 11 hours. Those are lofty goals, and ones we will put to the test.

To test battery life, we have our usual two tests. The first is our Light test, which cycles webpages until the laptop turns off. The Heavy test increases the number of pages loaded, adds in 1080p movie playback, and an 8Mbps file transfer. All of our battery tests are conducted with the display set to 200 nits brightness (or as close as possible) and the laptop is set to Power Saving mode to give it the best chance at the test. I also checked the display brightness several times during the run-down to ensure that the display was not dimming over time. 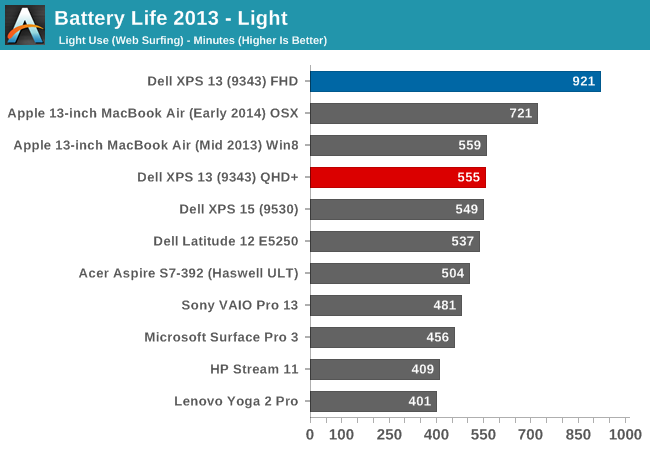 Amazingly, Dell claims 15 hours 21 minutes of battery life, and on our Light test we hit exactly that. The QHD+ model clocked in at just under 10 hours, which is in itself an amazing result. Our previous record holder for this test was the 13-inch MacBook Air, which has a 54 Wh battery versus the 52 Wh in the Dell. So even with a smaller battery, and a display with over four times as many pixels, the Dell XPS 13 has basically tied that result under Windows. The MacBook Air under OS X is still ahead.

Perhaps more impressive, the FHD model, which still has 1.6X as many pixels as the MacBook Air, achieves 60% more battery life. It is a pretty amazing result. Dell has obviously worked hard on power consumption for this model. Intel’s new CPU would certainly be part of this, but on our light test, the CPU is not as big of a factor as the display. With the IGZO TFT, the benefit is certainly quite impressive. It will be interesting to see if other manufacturers are able to come anywhere near the results of the XPS 13 over the coming year.

What is amazing is that Dell was able to deliver near the top of the charts in battery life with the high DPI version as well. The Yoga 2 Pro has the same size display and the same resolution, and a similar battery capacity as well, yet it scores 154 minutes (2.5 hours) less. High DPI certainly has a big hit on battery life, but with the XPS 13, it still lasts almost ten hours on our light test.

UPDATE: I have worked a way to get around the Content Adaptive Backlight Control for the battery life testing, and was able to achieve 15 hours of battery life on the light test in balanced power as requested by some of our readers. I am very confident in this result and tested the brightness levels for several hours without having any variation. Unfortunately it still cannot be disabled outright, so the display still can not be calibrated. 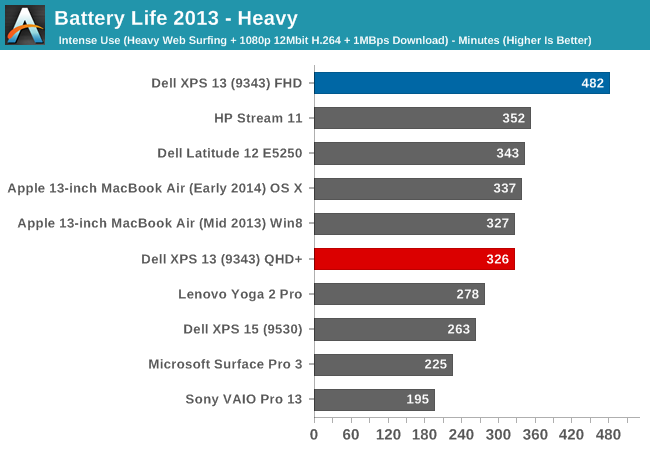 Moving on to your Heavy test, the QHD+ model is once again neck and neck with the MacBook Air, but the FHD version jumps well out in front of the next closest contender, the Atom based HP Stream 11. Eight hours for our Heavy test is truly impressive battery life. The CPU isn't maxed out, but with video playback, internet surfing, and a constant WiFi load most other laptops falter. The XPS 13 is still delivering "all day" battery life on the FHD model.

Next up, we will take a look at the Normalized graphs, which remove the battery size from the equation so that we can get a feel for the overall platform efficiency. 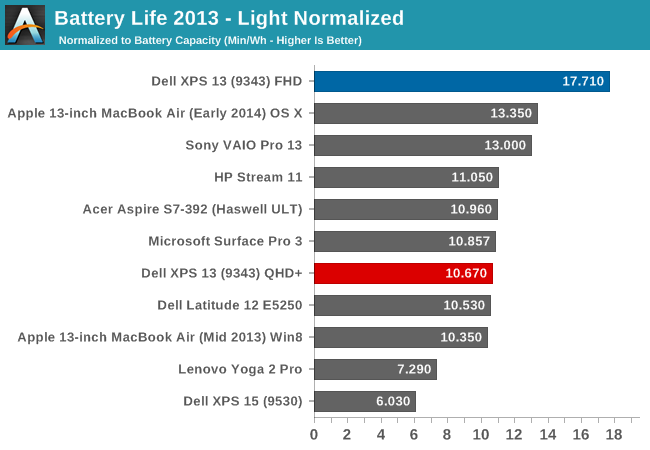 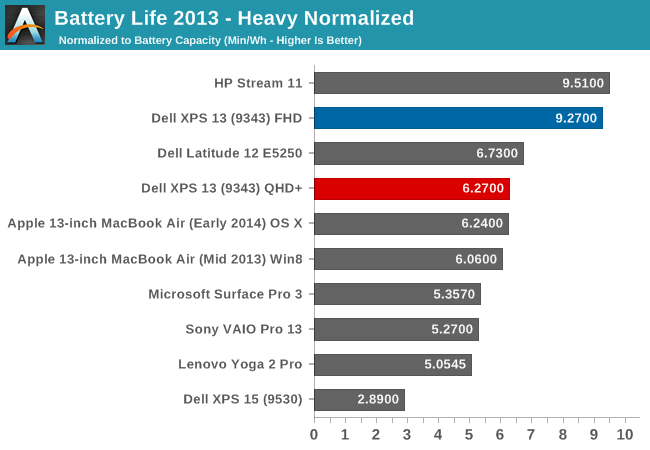 The FHD model once again tops the charts on light use, and by a large margin. On the Heavy normalized graph, the XPS 13 nearly matches the 5 watt Atom based HP Stream 11, which has half of the pixels to drive. It is a very impressive result. In the event that you need even more battery life, Dell also sells an optional 12,000 mAh battery that connects to the charging port, and this will almost double the battery life. 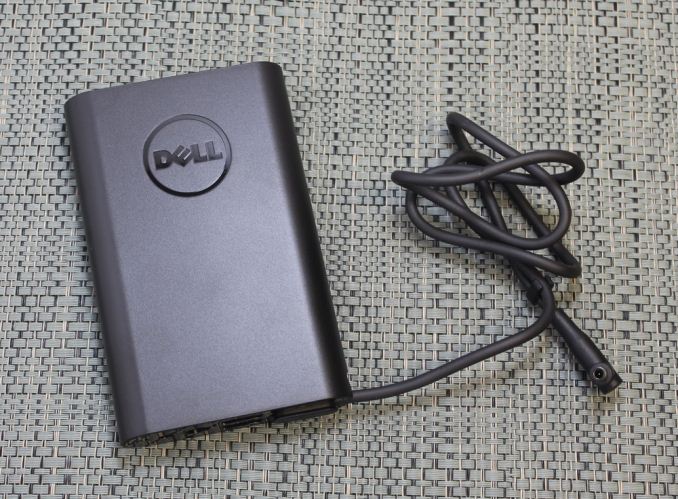 The nice part about the Dell Power Companion is that you can easily charge the laptop while it is in your bag during travels. It will also charge any other USB devices, and it comes with the necessary adapters to hook to any Dell. 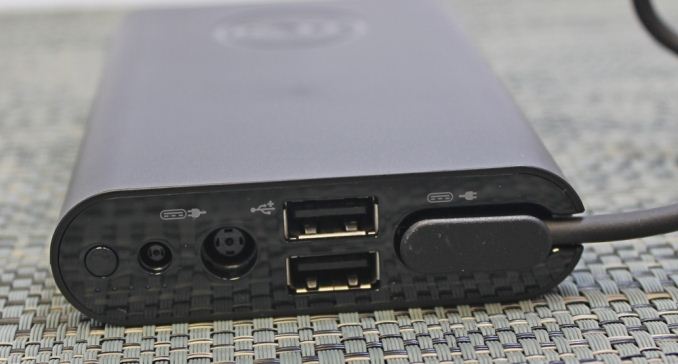 With just a 45 watt power adapter, one might be worried about the charge times on the XPS 13. However they seem very reasonable. The FHD model was able to charge the battery in just over two hours. The QHD+ model required three hours, but a significant amount of time was spent at 99% charge, as you can see in the graph below. Also note that if the laptop isn't in use, charge time should go down a bit. 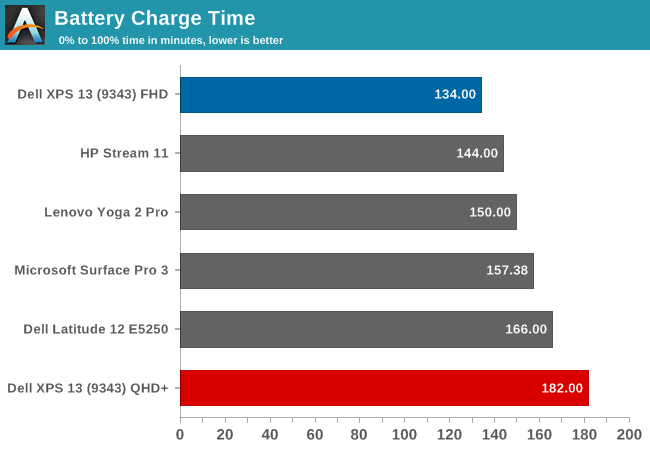 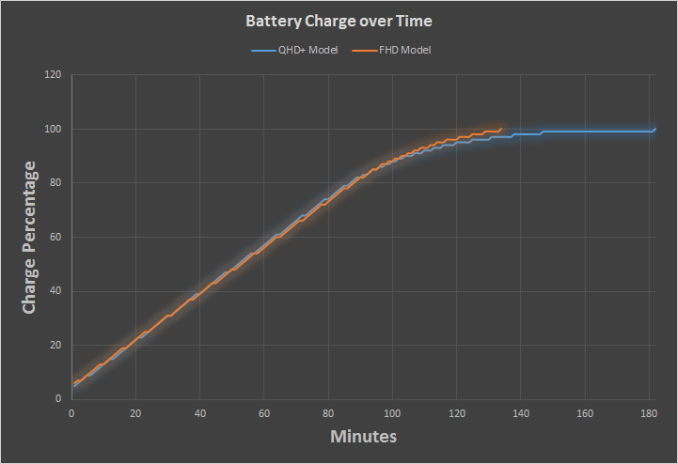 Dell has outfitted the XPS 13 with stereo speakers located on the sides of the laptop. They rate the internal amplifier at 1 watt per channel, and Dell states that they are tuned with Waves MaxxAudio Pro. Let’s take a look at the frequency response. All readings were done with the sound meter one inch above the trackpad. 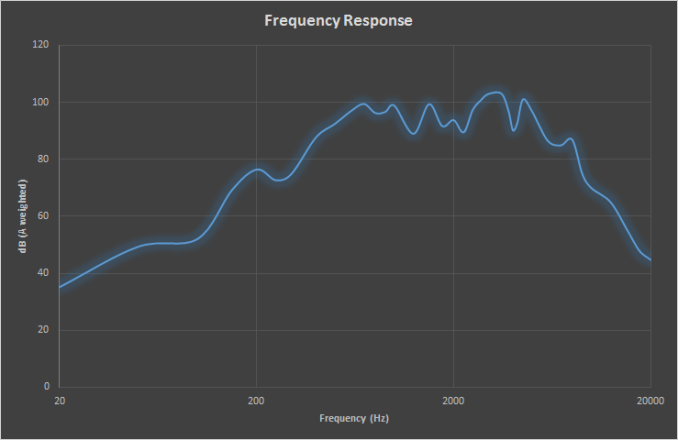 The frequency response is pretty good for such small speakers, and the volume is quite loud as well. Listening to music, the XPS 13 could hit around 86 dB. Sound quality was decent as well with good response in the low range. I was a bit surprised with the speakers' abilities considering how inconspicuous they are on the sides of the device, so Dell has done a nice job engineering them. Putting them on the sides is also a nice compromise between having them on the top (where there is not much room due to the width of this laptop) and having them underneath, where they tend to be on a lot of devices now. There is a good sense of stereo, and the sound is not muffled by whatever surface the laptop is resting on.

Broadwell-U is a 15 watt CPU and therefore it requires a fan. For many scenarios the fan is not required at all, but if the CPU is working the fan will come on at around 43 dB, and ramp up to a maximum of 47.2 dB. Overall, the noise was quite easy to live with. This is at a distance of 1", so from a normal user position the noise is far less noticeable. The pitch of the fan was low enough that it would not irritate like a smaller, higher rpm fan would.