When AMD created the Enduro brand, they were really almost where we wanted them. They had dynamic switching with support for most of the latest games and applications, and when it worked properly it would be difficult to tell if you were using an NVIDIA or an AMD dGPU. The problem was when things didn’t work and you had to go into the drivers, and there were several problems. OpenGL support was totally out, many of the latest games were also missing default profiles (and sometimes wouldn’t let you properly specify the correct GPU), the UI was obtrusive and sometimes hard to use (particularly for power users), and the drivers were dictated by the laptop manufacturers and were usually months old at launch and never updated.

While the UI seems like a minor thing to fix—I would have thought one or two months to improve the UI would have been sufficient—at least prior to the forthcoming update it remained largely unchanged. The lack of AMD-provided driver updates was really the major issue, because everything else could potentially be fixed with new drivers and you would never know. The other areas like OpenGL/OpenCL and support for various games/applications should improve over time as well, provided you can get drivers. That brings us to the upcoming Enduro release, scheduled to come out sometime this month or next. Officially it’s still just Enduro, but to help differentiate between the previous Enduro release and the upcoming release we’ll sometimes refer to the new version as “Enduro 5.5”. 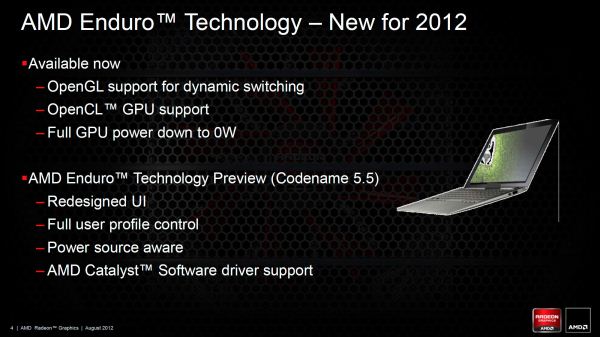 The biggest news with the latest iteration of Enduro is that AMD is planning to make universal reference drivers available for all the Enduro laptops. It’s not clear precisely what that means, but potentially any laptop with Dynamic Switchable Graphics or later (e.g. PX4.0 and later) would be supported by AMD’s “reference” drivers. That’s huge, and if AMD can deliver it will assuage most of our concerns with their hardware/software.  Hopefully none of the OEMs get bent out of shape or refuse to allow support, which is a problem we've seen in the past. We should see the first public release in the next month or two, and then another release somewhere in the November/December timeframe. 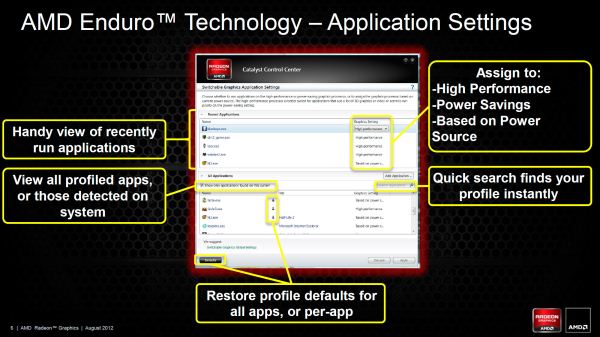 Besides the availability of driver updates, the UI also receives a much needed overhaul, providing both regular and power users all the options they’re likely to need as far as control of graphics switching is concerned. Open up the switchable graphics options and the top section remains largely the same, but the bottom now allows you to see all application profiles (or just the profiles for detected applications). There’s also a quick search option that works both on executable name and application/game name (e.g. HL2.exe or Half-Life 2 will both find the profile for Half-Life 2). From either list (recently used apps up top, or all apps at the bottom), you can set the GPU profile.

Where previously there were two settings (three if you count “Not Assigned”), there are now three options. As before, “Power saving” sets an application to run on the integrated graphics while “High performance” sets an application to run on the discrete GPU. The new third option is “Based on power source”, which does precisely what you’d expect: plug the laptop in and the apps with this setting will run on the discrete GPU; switch to battery power and they’ll run on the integrated graphics. For many users, everything could default to “Based on power source” and they would be happy, but certainly there will be times where you’re running on battery power but still want to use the dGPU and the drivers give you that option. Should things get squirrelly, you can also reset applications individually or globally to their default settings. It’s worth noting that the power state aware setting is something that NVIDIA currently does not implement, requiring manual intervention if you wish to override your normal settings—though how often people are using apps that require the dGPU while on battery power is something we could debate.

Besides the individual application profiles, AMD is also adding a new area to their drivers: Switchable Graphics Global Settings. This is something you could sort of get before with some laptops, but previously it involved changing from Dynamic Switchable Graphics to manual switching (i.e. switching based on power source) and then forcing the laptop into High Performance or Power Saving mode if you wanted to be low power while plugged in or high power while unplugged. That was clunky and at least in the case of the Sony VAIO C we tested it caused flickering similar to the old switchable graphics, with the dGPU drivers getting unloaded and iGPU drivers getting loaded (or vice versa), with some work behind the scenes copying context from one GPU to the other. It worked but it wasn’t elegant; perhaps more importantly, Microsoft doesn’t want anyone doing this with Windows 8 and thus new laptops won’t be able to get a Windows 8 sticker if they use this method of switching (which basically means no new laptops will do this). To make up for the loss of this functionality (which some people still prefer), AMD has added a new global settings section. 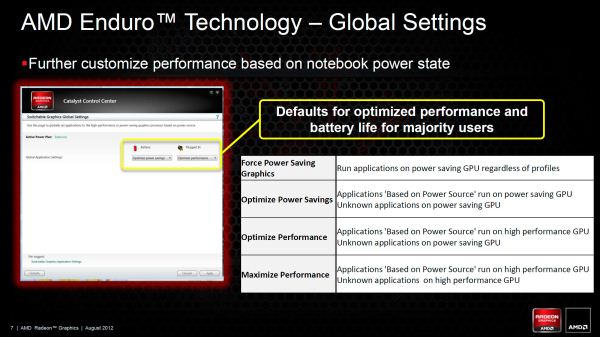 The reason for that last discrepancy (e.g. why you can’t simply run everything on the dGPU and forget about the iGPU) is that certain tools have to run on the iGPU. Intel’s drivers are one example—loading those up on the dGPU would cause problems. Intel’s WiDi is the only other I could find on my particular Clevo notebook. We were told that some of the laptop utilities like an overlay showing percentage of brightness, volume, etc. may also need to run on the iGPU. Besides the few applications that have to run on the iGPU, any applications that are set to Power Saving will continue to use the iGPU—and this makes sense as there are a lot of applications that can be set to run on iGPU/dGPU that have no need of higher performance GPU options (several anti-virus utilities come to mind, where they're starting to create a 3D context for their UI). The net result is that other than a few specific applications where the profile will exist and be locked to the iGPU, with no option to change to dGPU, everything else that uses higher function graphics can be customized to run on a specific GPU, but if you set something to iGPU presumably you want it to always run there—otherwise you would use the “Based on power source” setting.

A full set of screenshots from all the driver screens is available in the gallery below if you’re interested.

One final topic worth discussing is Windows 8. Certainly there are owners of existing laptops with switchable graphics that are wondering if they can upgrade to Windows 8 and what will happen. We’ll have to see how this actually plays out, but it sounds like the earlier versions of PowerXpress (3.0 and earlier) will probably get support with one driver bundled with Windows 8, and that may be it—but there’s always the possibility for the laptop OEMs to release their own updates, or for AMD to roll out additional drivers for older laptops. The potential for PowerXpress 4.0 and later laptops to get regular driver updates (for Windows Vista/7/8) is there, but until we actually start seeing public driver releases AMD hasn’t fully committed to supporting all of those laptops.