ASUS had another amazing Computex press conference this year. Along with the dual-screen Taichi notebook, the Transformer All-in-One and the Ivy Bridge based Transformer Book, ASUS announced two more Windows 8 tablets.

At the high-end is the 32nm Clovertrail based ASUS Tablet 810. The 810 features an 11.6-inch 1366 x 768 Super IPS+ display, 2GB of RAM, 64GB of solid state storage, NFC, 8MP rear facing camera and 2MP front facing camera. It's a full featured Windows 8 tablet that can dock into a full keyboard similar to the Android based Transformer Pad. About the only thing the 810 is missing is a higher resolution panel, although I wonder if Intel isn't comfortable greenlighting higher resolution panels driven by Clovertrail (effectively a non-phone Medfield). 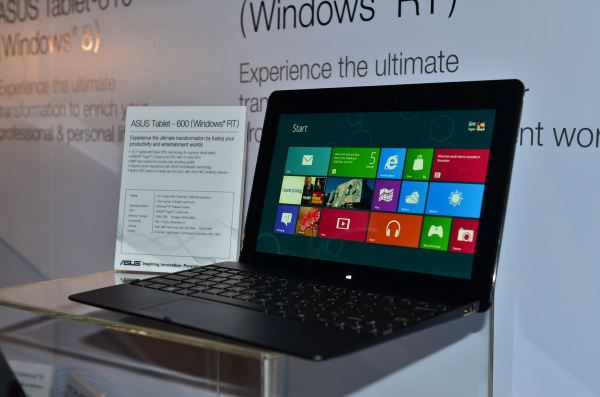 Pricing and availability are both unknowns at this point. Intel, Microsoft and their partners are putting forth a real effort to make a dent in the non-iPad tablet market.