The review unit provided to us was the 2 TB ReadyNas NV+ v2 version. The industrial design of the ReadyNAS lineup is aesthetically pleasing, and the unit makes optimum usage of the space available. Some of the unboxing pictures are provided in the gallery below. The unit comes with an external 90W PSU / adapter.

The front of the NV+ v2 units have the perforated drive bay door in the middle. Above that, we have a USB 2.0 port, a backup button, some LED indicators (for active drive status and disk activity status) and the power button. At first sight, it appeared as if Netgear had made a serious oversight by tying up the backup button to the slow USB 2.0 port, but a quick perusal of the web interface revealed later that the backup button could be tied to any type of backup job on any port in the unit. Below the drive bay door, we have a VFD display with backlighting to present status messages for those setting up the unit without a PC nearby.

The rear of the unit has the GbE port and 2 USB 3.0 ports. There is also a single large fan which spins at low speeds. The handle to lug the unit around is a nice addition.

In our test setup, the unit and the host driver were connected to a Cisco SG200-08 Gigabit smart switch. The switch was connected to the Internet through a Netgear WNR 3500L router. Since our review unit already had RAIDiator (the ReadyNAS OS) pre-installed (with the unit configured to interact with a DHCP server), setup was a breeze. The RAIDar software to discover the unit on the network was not necessary. The IP address picked up by the unit was displayed in the front panel.

Accessing the IP over the browser led us to the redesigned FrontView interface. One of the chief complaints about the Netgear NAS units has been the rudimentary nature of the web interface compared to the rich offerings from companies such as Synology and QNAP. With the redesigned interface, Netgear has made a positive effort towards catching up in this department. Some screenshots of the new interface in action are provided in the gallery below.

The strength of the ReadyNAS lineup over competing NAS solutions is the wealth of user contributed add-ons that is available on the ReadyNAS support website. We will talk about the add-ons in detail in a later section. While SSH is not available readily, it is possible to enable it with a add-on. Once logged in, it is clear that RAIDiator is based upon a Linux kernel, as the following screenshot shows. 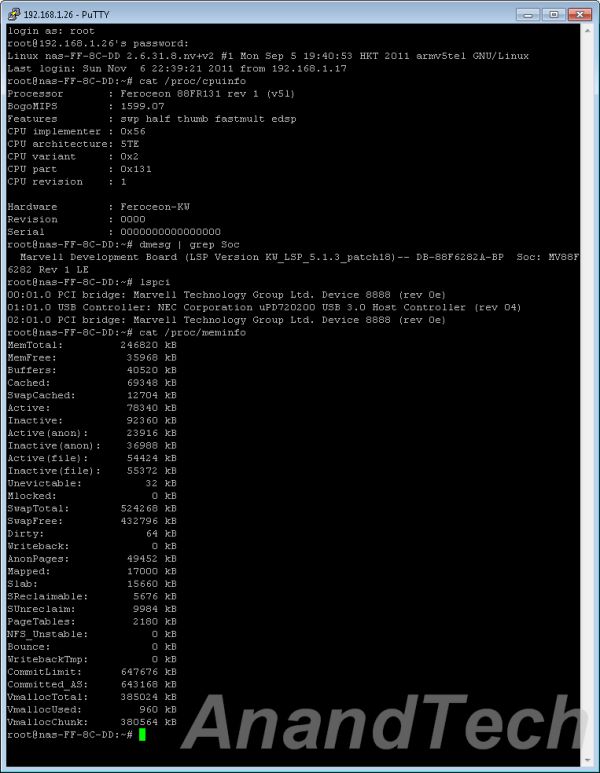 The Marvell CPU is the ARMv5 based Feroceon 88FR131. The 1.6 GHz version is a part of the Kirkwood 88F6282 RAID controller. We have already seen the internal details of this controller in the Synology DS211+ review. In addition to the main RAID controller, we have the two USB 3.0 ports enabled by the NEC uPD720200 USB 3.0 host controller. The unit comes with 256 MB of DRAM (compared with the 512 MB DRAM in the Synology DS211+).

There are a couple of interesting things at play here. The Synology DS211+ is almost a year old now. So, it appears as if Netgear is 1 year late to the party in putting out a NAS with this platform. The second aspect is the pricing. The diskless Synology DS211+ costs close to $400 while the Duo v2 with similar hardware specifications turns up at $200. Of course, the lower price comes with the absence of support for NFS, iSCSI and other similar SMB / SOHO requirements. Purely based on pricing, Netgear seems to have hit a home run. In the next section, we will discuss the performance aspects of the Netgear NV+ v2.