As we have already covered the bulk of Windows 7’s new features in our look at the Windows 7 Release Candidate, we’re not going to spend too much time here. If you want an in-depth look at the new features, please see that article.

Vista’s performance was something of a quagmire. Even after SP1 fixed its biggest issues, it continued to be rather RAM hungry and poorly suited for low-end computers and newly minted cheap computers with the performance of older low-end computers. Netbooks made this situation particularly problematic for Microsoft, as their limited performance amplified this issue and resulted in netbooks shipping with Windows XP almost exclusively.

For Windows 7, Windows has been put on a diet in order to perform better on those machines. The most noticeable changes here are that Windows 7 eats less RAM and hard drive space out of the box than a comparable version of Vista did. There have also been some underlying tweaks to SuperFetch (it’s less aggressive on startup) and the kernel to improve responsiveness.

Our own experience here is that Microsoft has come through on this, although whether it’s enough is going to depend on just what someone is looking for. We have a few laptops where Vista was an absolute slug while Win7 runs just as well as Windows normally does. For someone looking for Win7 to perfectly replicate XP’s performance however, they’re going to come away disappointed – you’re never going to stuff something like Windows 7 in to the performance characteristics of an 8 year-old OS that forgoes real security and predates wireless networking.

Also while these changes should percolate to higher-end computers, the impact will be marginal at best. Vista had enough going on that it could bog-down low-end hardware, but hardware that as already capable of running Vista well isn’t going to greatly benefit from changes made to squeeze more out of the low-end. We’ll see this in detail later with our benchmarks.

Windows’ media capabilities have been greatly augmented with Windows 7, primarily through the inclusion of decode and encode capabilities for a number of video and audio formats. While Vista included support for MPEG-2/1 and WMV9 video, Win7 has added support for much more contemporary codecs: H.264 and MPEG-4 (A)SP. Audio support has seen the inclusion of support for AAC and AAC+ audio, commonly found as companion audio streams for H.264 video, streaming internet radio, and portable media players. 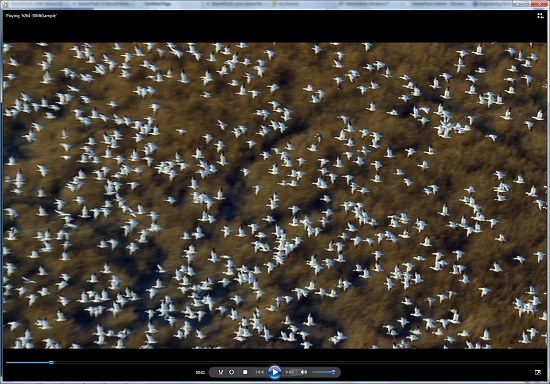 This gives Windows 7 the ability to play just about everything entirely out of the box, forging the need to deal with codec hell. The only notable things missing here are support for BluRay playback (you’ll need separate software), and some media container types (OGG, Matroska, MOV).

Encode support has been added for H.264 video and AAC audio through the Media Foundation Transcode class. This gives Win7 the ability to encode video on the fly for loading media on to portable media players and streaming to other devices (e.g. DLNA). However the use of this feature is quite limited at this time; only a handful of media players support the level of integration with Windows required to use the encoder. iPods need not apply.

Meanwhile Windows Media Center has seen its own improvements on top of the benefits it derives from greater codec support. At a high level this is a general UI touchup. At a low level this includes adding support for ClearQAM cable tuners, and the user-installation of CableCARD tuners.

Windows 7 also brings about some additions to graphics capabilities. The headliner here is DirectX 11, whose introduction is being timed with the launch of Windows 7. DX11 is being released on Vista too any day now, so this is by no means an exclusive feature, but given the timing, it’s one of importance. We’ve already seen AMD launching their 5700 series and 5800 series ahead of Windows 7, so that they can have DX11-supporting cards on the shelves for this launch.

Windows 7-specific changes include the addition of WDDM 1.1, which is a minor update to the video driver stack for better memory utilization. This is accomplished by keeping the texture for a window (when using Aero for desktop composition) solely in VRAM instead of keeping a copy in local system memory too. WDDM 1.1 also brings support for heterogeneous display adapters, something Vista took away.

The GDI graphics stack has also been tweaked for performance reasons. Previously only a single application could write to it at once, making GDI writes a bottleneck. The stack has been changed so that now it’s the responsibility of the GPU to schedule multiple writes, rather than having an application blocked. We haven’t been able to find any performance cases where this is of help, however.

While Windows 7 is not the sizable overhaul of Windows that Vista was, it still has a few low-level changes. The biggest change for users is the official support for the TRIM command for SSDs, which will improve SSD write performance without the need for manual refreshes. The kernel’s dispatcher lock has also been rebuilt for better scaling; previously it effective topped out at 32 cores, now it scales to 256 cores. This will be more felt on the server branch, Windows Server 2008 R2.

Primarily targeted at business users, Microsoft has officially added a derivative of their VirtualPC virtualization technology to Windows 7 in the form of Windows XP Mode. Windows XP Mode is a pre-configured Windows XP Pro virtual machine for running applications that just won’t run natively under Win7, allowing businesses to half-step to Windows 7 as part of a longer transition. It comes as a separate download available for Win7 Professional and higher editions, and no, it doesn’t run games.

The bulk of the changes in Windows  7 are going to be things that you can see, literally. Various interface elements have received drastic overhauls, and at the risk of slighting all of the other groups at Microsoft, more work appears to have been put in here than anywhere else.

Chief among these is the near-total replacement of the taskbar. The new Win7 taskbar is much closer to Mac OS X’s dock in appearance and function. Active applications appear on the taskbar as just large(r) versions of their application icon, and icons can be pinned in place so that they can be launched from the taskbar in the future, not unlike the old Quick Links feature. Undoubtedly, this is going to be the hardest thing for new users to get used to, although it’s certainly not hard to grow accustomed to. 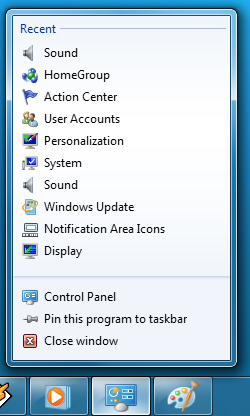 Along-side the dock taskbar are jump lists, which are replacing the normal right-click menu for items in the taskbar. Jump lists contain application specific commands, standard window manipulation commands, and recently used files for the application in question. Applications need to be coded to make full use of jump lists.

Also added are a pair of new Aero gestures. Aero Snap causes an application to be maximized when it’s dragged to the very edge of a screen, and returned to normal when dragged away. Aero Shake minimizes all other windows when a window has been shaken. Microsoft’s Rolodex-wannabe Flip3D is still here, much to our chagrin.

Other notable changes include gadgets, which have been liberated from the sidebar in order to reside on the desktop, and the classic Start Menu, which has been terminated entirely in favor of the Vista (and later) Start Menu. Finally, the whole default color scheme of Windows has been redone; pea green is out, blue/grey is in.

Finally, User Account Control, the fundamental underpinningsof Vista’s enhanced security, has also seen an overhaul. By reducing the integrity of UAC slightly so that by default it auto-elevates signed Microsoft programs, Microsoft hopes to reduce the perceived annoyance of UAC without compromising the actual security. As a result, UAC should be less noticeable, particularly when first setting up a computer. However there are possible security consequences of this, which we’ll get in to later