Gearing up for HDMI on the Desktop

So, more specifically, what is HDMI? HDMI - High Definition Multimedia Interface - is actually just a logical progression on top of DVI. The video segment of the HDMI signal is actually compatible pin for pin with DVI, but in a much different package. HDMI improves on DVI by transmitting digital audio on the same interface, adding support for HDCP and also better DDC options for manufacturers.

HDMI provides 5Gbps over copper interconnects up to 15 feet - that's enough headroom for a 1080p signal and 8 channel audio. For those who like to do the math, a 1080p raw video signal and eight 192kHz audio channels require less than 4Gbps. So, there is a significant portion of unused overhead built into the HDMI specification. We've seen demonstrations of hooking your DVD player, receiver, and PVR each with a single cable at shows like CES and the word is that adoption of HDMI is going even faster than originally planned.

Below, you can see a cross-section of what the 19-pin HDMI cable looks like. The smaller, sturdier cable was designed with laptops and slimmer devices in mind. The DVI cable on the right shows the large difference in size. 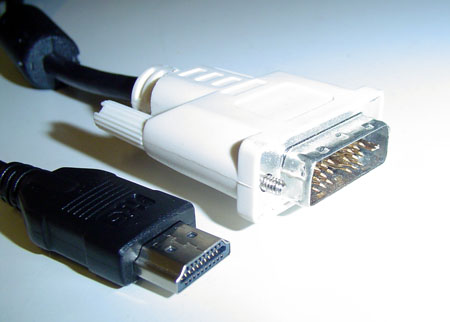 Right now, HDMI cables, like the original DVI cables, are very expensive. High quality cables easily retail for more than $100 each, although middle of the pack HDMI cables in the one and two meter range can be had for less than $20.

Remember the interoperability and quality issues with older DVI connectors on video cards? Since DVI is a relatively loose protocol, manufacturers are not strictly enforced to adhere to design principles. Signal quality on DVI connectors hit a low point in 2001/2002, but fortunately, it seems that awareness of the problem has started to rectify these issues. Since Silicon Image had a significant influence on the original DVI and HDMI specifications, they have taken it upon themselves to set up their own quality control laboratories, PanelLink Cinema (PLC). New devices will go through a very stringent verification process to assure that the next generation interfaces don't have the same problems which plagued DVI. The lab also works directly with Intel's HDCP spinoff licensor, Digital Content Protection, to assure that HDMI-ready devices adhere to the HDCP guidelines. Copy protection is a large facet in the HDMI specification, so it only makes sense that Intel and Silicon Image have so much invested in building trust with the content providers.

Today, the largest factor that plagues HDMI in the living room is whether or not devices are actually taking advantage of 8 channel audio. Many of the first generation HDMI ready devices only utilized two channels with the thought that TVs in particular would not need anymore than 2 channels. As a result, many new devices still ship with separate stereo inputs just as they do with DVI, but obviously, the push will be for new devices to drop these inputs in favor of digitally-protected high fidelity capabilities built in the cable specification. Stereo would just be a fall back.