While product refreshes have their ups and downs, they’re not without their utility. For AMD and their partners this means a chance to run through the rest of the year with a fresh lineup of cards, and maybe change consumer perceptions a bit in the process. Meanwhile for potential video card buyers, performance has gone up over the previous lineup, and you get more bang for your buck.

So to wrap things up, where do AMD’s new Radeon RX 500 midrange cards stand? For AMD and its partners the picture is better, though I’m not sure it’s quite where they would like to be. 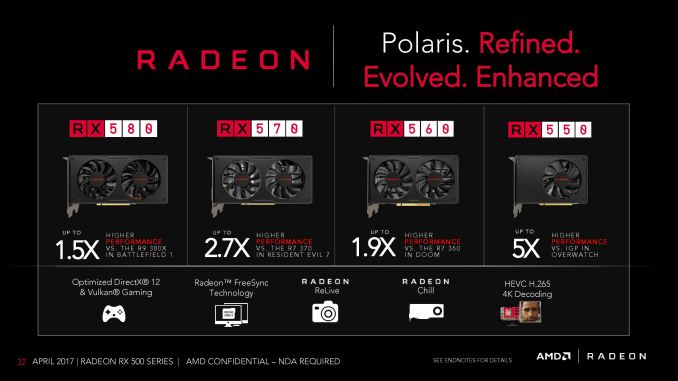 To get the elephant in the room out of the way first, power efficiency has taken a noticeable hit with the Radeon RX 580 and Radeon RX 570. AMD has opted to pour everything into performance rather than fighting a war with NVIDIA they can’t win. As a result their performance and their pricing will dictate their success in the market. Otherwise if you need a power efficient card for a mITX build or smaller air conditioning bill, look elsewhere.

Relative to the RX 480 and RX 470 then, the performance gains we’re seeing with the RX 580 and RX 570 are nothing spectacular, but then AMD has kept their promises similarly small. In practice this means that the RX 580 is only averaging 3% faster than the RX 480 it replaces in AMD’s product stack, while the RX 570 looks better, picking up 7% over the RX 470. Based on these numbers, I feel it’s fair to say that while both cards are faster than their earlier incarnations, I wouldn’t fault anyone for lumping the two generations of cards together. The small gains don’t enable the newer RX 500 cards to do anything the RX 400 cards couldn’t always do; though even a few percent can make all the difference in a game right on the bubble of sustaining 60fps.

Looking at the configurations of the cards, I suspect that the RX 580 would really like some more memory bandwidth, which is why the real-world gains are only about half of what we’d expect looking solely at the boost clocks. The RX 470 on the other hand did get a small increase in memory bandwidth, and it ends up being the stronger card for it. However I don’t know if faster memory is a viable option for AMD and its partners, as none of the factory overclocked cards are shipping with overclocked memory.

As for the competitive landscape then, AMD’s situation has improved, though I fear by not enough. Across the full spread of games in our benchmark suite, the RX 580 and GTX 1060 6GB change lead a few different times, so the RX 580 is able to best NVIDIA’s best in absolute performance in the right games. The problem for AMD is that those games appear to be too few; as a result the RX 580 trails the GTX 1060 by an average of 7% at both 1080p and 1440p. AMD has narrowed the gap somewhat – this was an 11% deficit with the RX 480 – but not by enough. And coupled with AMD’s worse power efficiency, this puts AMD in a tough spot. The biggest challenge right now is that GTX 1060 prices have come down to the same $229 spot just in time for the RX 500 series launch, so AMD doesn’t have a consistent price advantage. That’s the one thing AMD can change, and it’s likely to be where they need to look next. 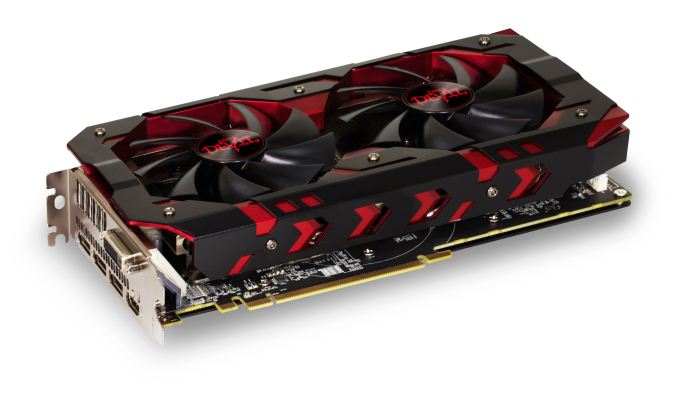 As for the RX 570, the story is similar. It puts up good numbers for a 1080p card priced at $169, but it faces the continuous threat of a GTX 1060 3GB that starts only $10 higher. Though for bargain hunters looking to stay in the AMD ecosystem, the RX 570 offers a whole lot of value relative to the RX 580, especially if you are willing to make the sacrifices that come with 4GB of VRAM. 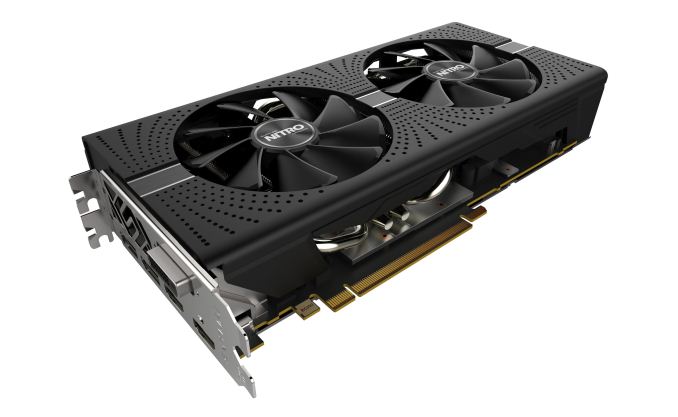 But regardless of the overall position of the RX 580 and RX 570, both PowerColor’s Red Devil RX 580 and Sapphire’s Nitro+ RX 570 left me impressed. Their hulking size feels a bit out of place, but I can’t argue with the build quality. Both cards are very well built, and both cards are nearly whisper silent while gaming, even with their full factory overclocks in place. Those factory overclocks in turn add around another 5% to their framerates, coming as a mix of improved clockspeeds and reduced/eliminated power throttling. The combination of build quality and improved performance means that, if nothing else, PowerColor and Sapphire have earned their price premiums within the Radeon RX 500 series. This is everything I like to see in terms of a customized, open air cooled card.

Finally, let’s turn our gaze towards the future. While the Radeon RX 500 series gives AMD a welcome chance to reset their lineup for the year, today’s launch is largely just setting the table for more important things to come. The main event for AMD this year is going to be Vega, which is due this quarter. As a complement to Polaris, Vega will mark AMD’s first foray into high-end video cards for this generation. I don’t know how it’s going to turn out, but few things are as exciting as a new architecture, so for both techies and gamers, it should be a fun trip.