A common trend among the tablets I've reviewed in the past few months is that they've used Intel's mobile SoCs rather than the ARM SoCs that you'll see in most tablets and smartphones. All the tablets I've reviewed have come from manufacturers that traditionally made Windows PCs and laptops, and the long-term relationship they would have with Intel is a reasonable explanation as to why they've partnered with Intel for the processors in their tablets. Like both models of the Dell Venue 7000 series, and the top tier model of the ZenFone 2, the ZenPad Z580CA is powered by an Intel Atom Z3580 SoC. This is a quad core Atom part built on Intel's 22nm process, with a max burst frequency of 2.33GHz. In the case of the Z580CA it's paired with 4GB of LPDDR3-1600 memory, which is twice as much as the amount in the Dell Venue tablets.

To evaluate the ZenPad Z580CA's performance I've run it through our standard benchmark suite. The first set is our web benchmarks which is influenced both by a device's browser optimizations as well as its CPU, followed by BaseMark OS II to evaluate several aspects of a device's hardware, and finally PCMark which emulates tasks that a user would perform while actually using a device. 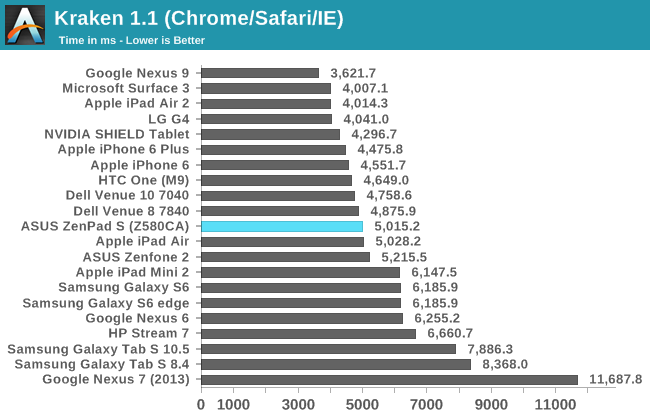 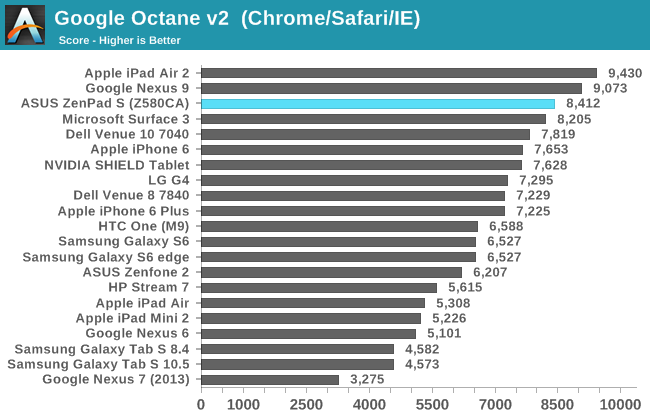 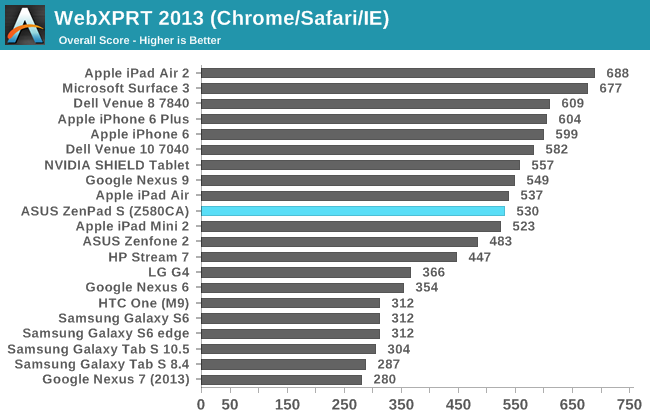 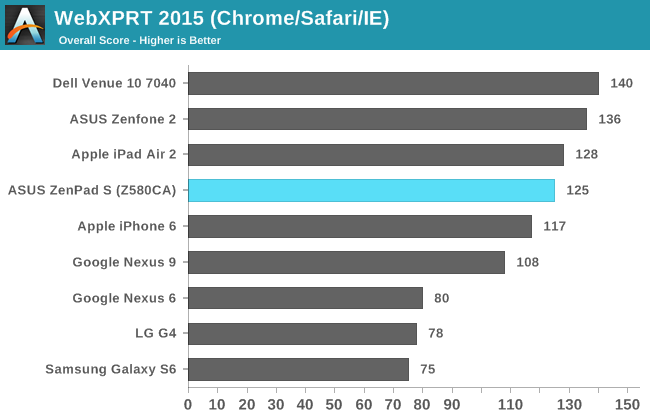 The ZenPad S performs well in our web browser benchmarks. There’s clearly differences at the OS level as well as possible BSP (board support package) differences between the ZenPad and other Intel-based Android devices like the Dell Venue tablets and the ZenFone 2. In Kraken we see a result closer to the middle of our chart, sitting among the Venue 8, Venue 10, ZenFone 2, and Apple’s A7-based iPads. It’s worth noting that as we no longer have those iPads for testing, the results for those devices were performed on iOS 7 and don’t benefit from any enhancements made to Apple’s rendering engine in subsequent releases.

In Google’s Octane benchmark the ZenPad S sits high on the chart with a score that isn’t quite as high as the Nexus 9 or the iPad Air 2, but sitting not far behind. There’s an enormous improvement over the ZenFone 2, and I’m not sure what to attribute this to as both devices use the same hardware platform and both are Android 5.0 underneath ZenUI. Since the test isn’t very long it’s not likely that it has to do with differences in thermal throttling between the two, and most likely is rooted somewhere in the software differences between the ZenFone and the ZenPad.

As for the 2013 and 2015 iterations of WebXPRT, the ZenPad S seems to perform much better in the latter test than it does in the former. While in WebXPRT 2013 it sits behind the iPhone 6 and the Nexus 9, in the 2015 iteration it surpasses both of them. In both cases it’s still behind the iPad Air 2, but for $299 you’re getting a lot of performance for your money. 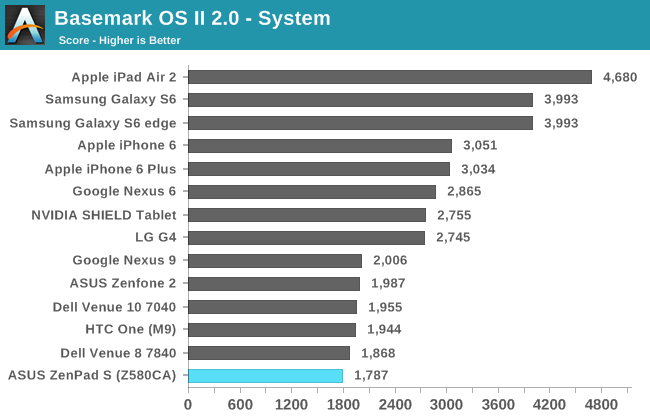 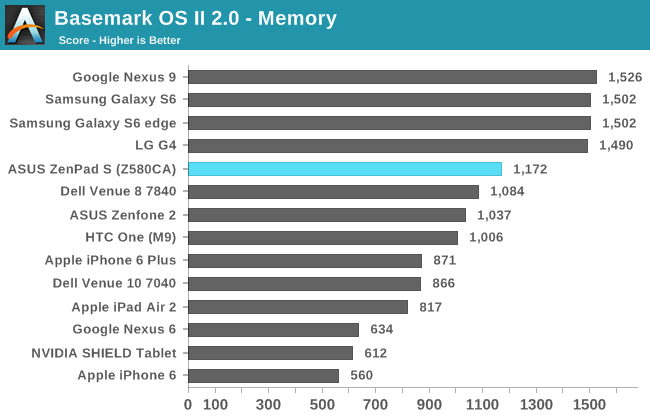 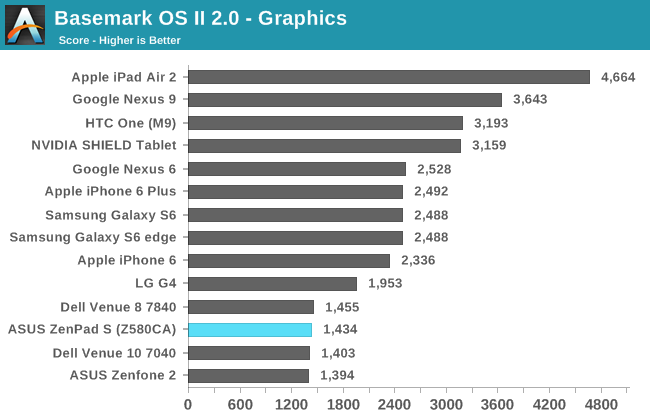 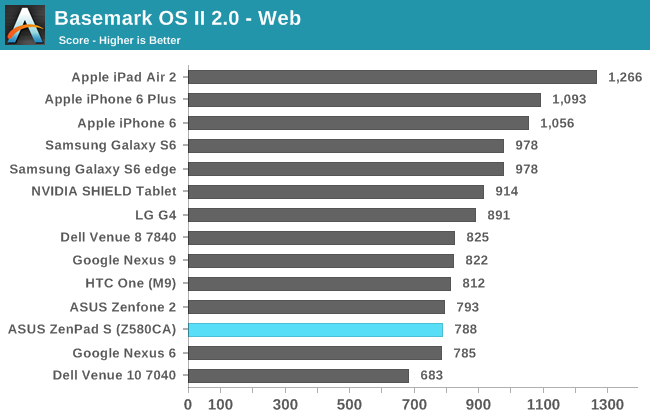 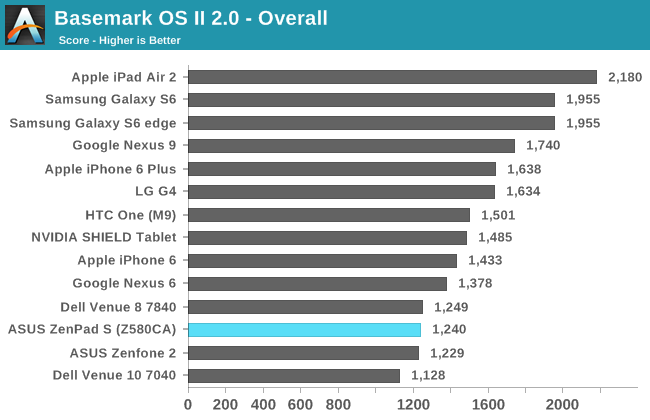 Like all the Intel-based Android devices that I’ve tested, the ZenPad S doesn’t score very high in BaseMark OS II. The score in the graphics sub-test is tied with all the other G6430 devices for last, which says more about how far GPU performance in mobile has come in two years rather than the ZenPad S simply being slow. The score in the system sub-test which stresses the CPU and RAM is the lowest on the chart. In the end all Intel Atom devices don’t perform well in BaseMark OS II, but when a device is $199 like the ZenFone 2 or $299 like the ZenPad S Z580CA I think the performance that the Atom SoC provides is more than sufficient. 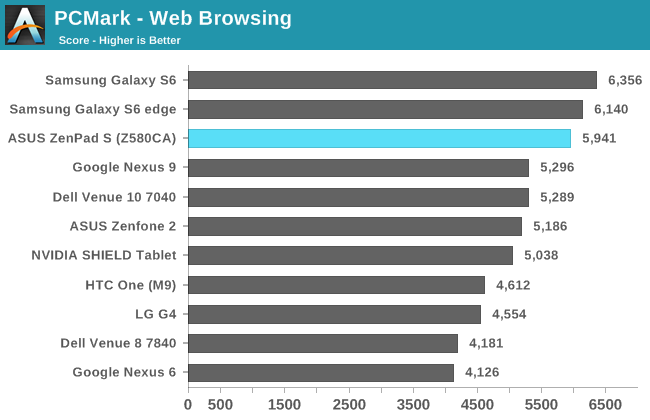 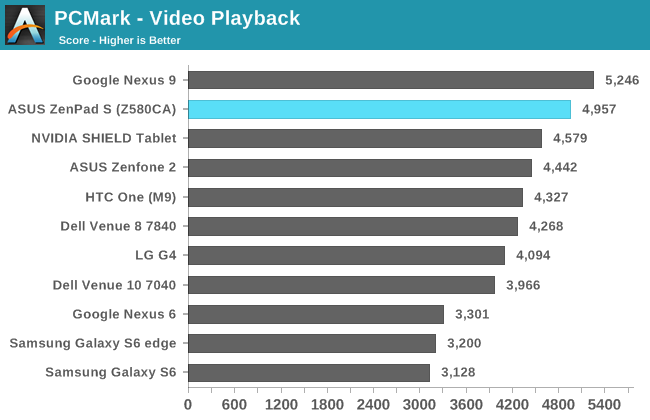 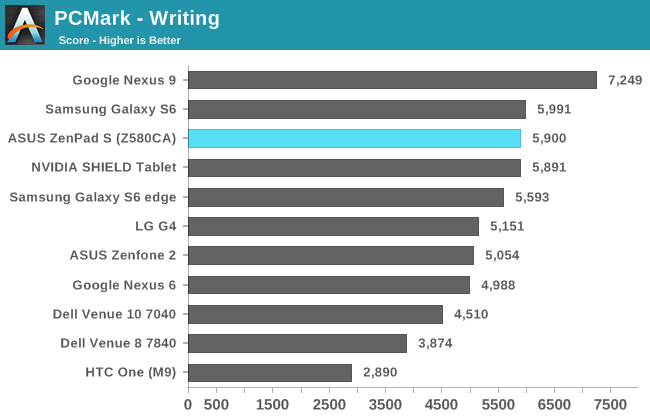 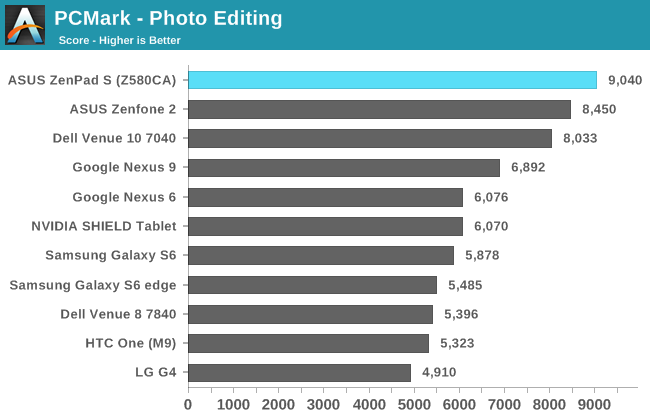 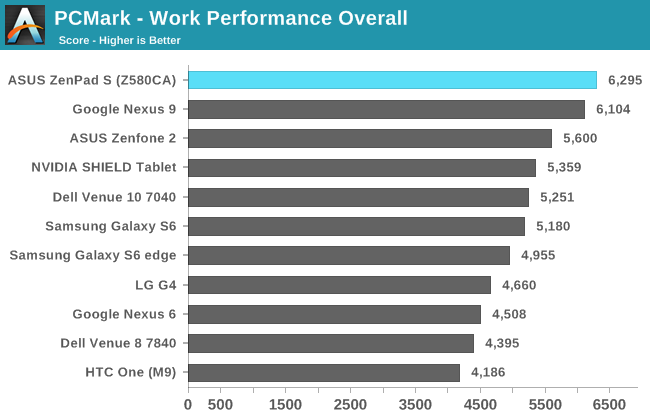 Our final test is PCMark, which emulates tasks that users will perform in the real world like browsing the web, playing and seeking videos, editing photos, and more. The ZenFone 2 performed very well in PCMark, but it ended up being carried to an extent by a disproportionately high photo editing score. The ZenPad S takes this even further with a higher photo editing score, and ends up taking the top spot in the overall ranking. There’s definitely a large software influence in these tests, which isn’t unlike the real world performance that is being tested, which requires both good hardware and optimized software to provide good performance. That being said, I think the ZenPad S ranking first on the basis of its extremely high photo editing score is a little bit questionable, but even without that test it would still score highly overall.

My conclusions about the system performance of the ZenPad S Z580CA are not unlike those in my ZenFone 2 review. When a device is $199 or $299, Intel’s Atom Z580CA SoC is faster than any ARM-based Android device at that price. PCMark doesn’t support iOS, and so there’s no way to know how well the ZenPad S compares to the iPad Mini 2 outside of web performance, but based on the JavaScript benchmark results it’s clear that the ZenPad S should be competitive with it, if not faster.