The 2015 Moto E with LTE is the first device with Snapdragon 410 that we've run through our tests. However, buyers of the 3G versions will only get a quad core Snapdragon 200 with 4 Cortex A7 cores. While this is still an improvement over the original, it's quite a disappointment when compared to the LTE edition. To be clear, the results below are from the Snapdragon 410 version, not the Snapdragon 200 version.

Qualcomm's MSM8916 is a quad core Cortex A53 part. Motorola's implementation has it running with a peak CPU core frequency of 1.2GHz, and it's paired with a 400MHz Adreno 306 GPU. Like the Cortex A7 cores used in Snapdragon 410, Cortex A53 is still a dual-issue in-order design, and pipeline depth remains the same as well. ARM has greatly improved branch prediction accuracy and expanded how instructions can be co-issued with Cortex A53, and so much of the performance increase over Cortex A7 will come from those improvements. 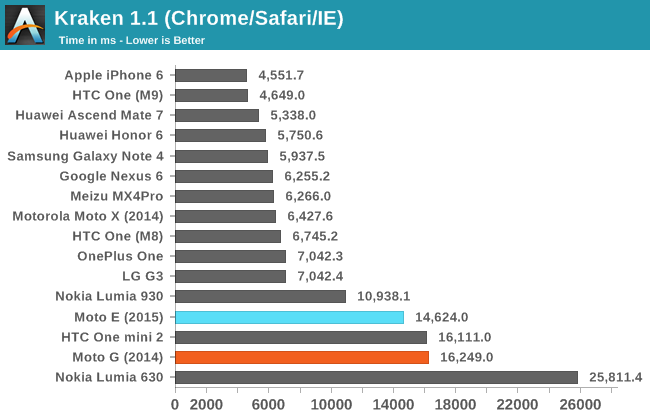 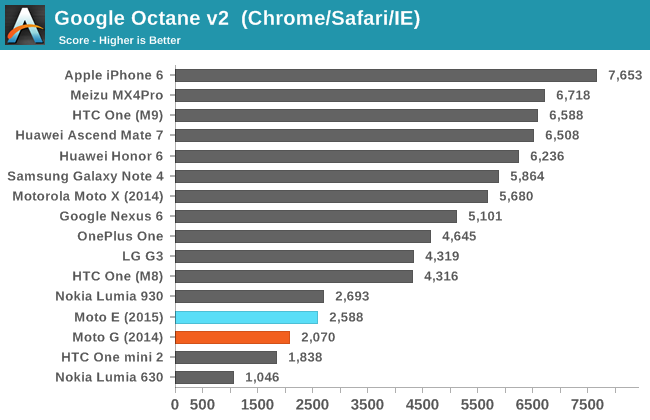 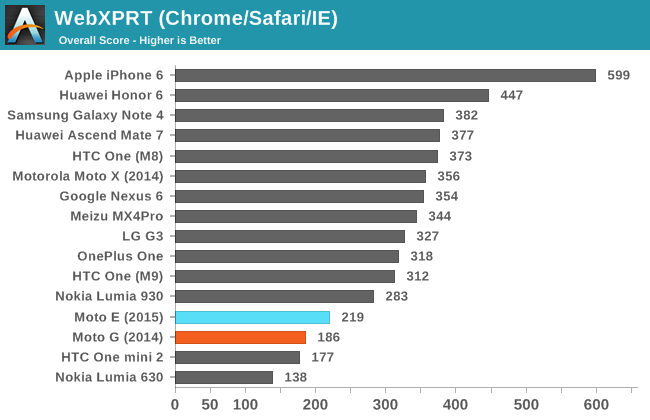 The Moto E shows a decent improvement over Snapdragon 400 based devices like the Moto G, and the improvement over the original Moto E would be even larger. That being said the Moto E doesn't do quite as well as one might expect in our browser tests. Browser optimizations play no small part in this, with Chrome having lagged behind the stock browser from other manufacturers for some time now. Motorola's devices use Chrome as their default browser, and I have a feeling that to an extent the Moto E is limited by software here rather than hardware. 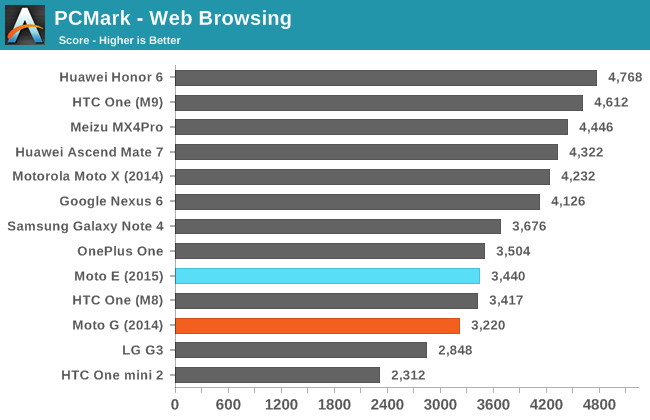 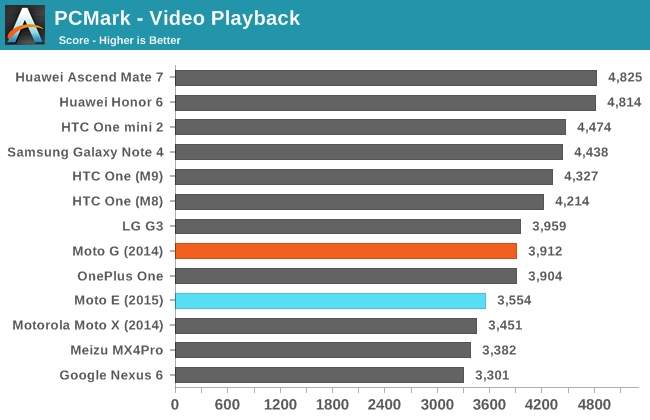 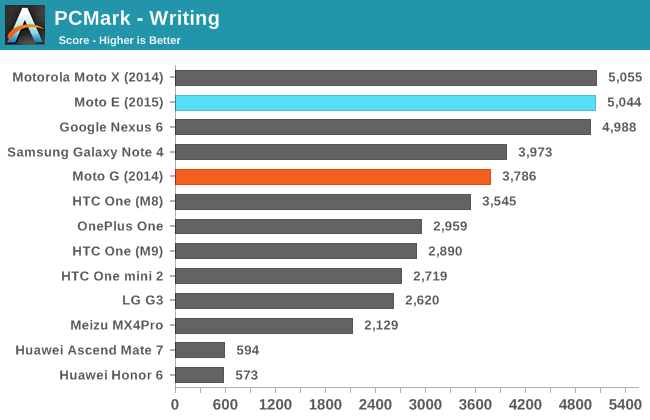 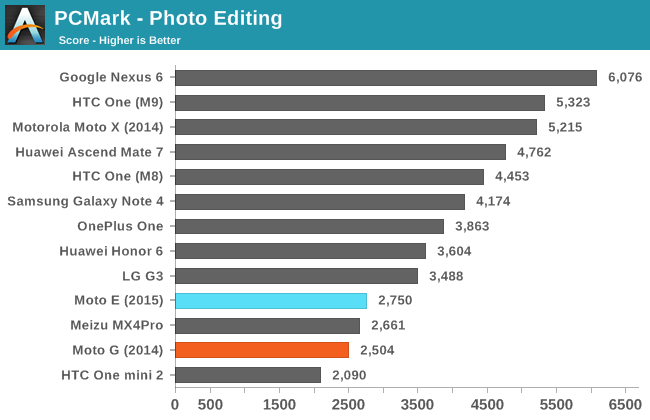 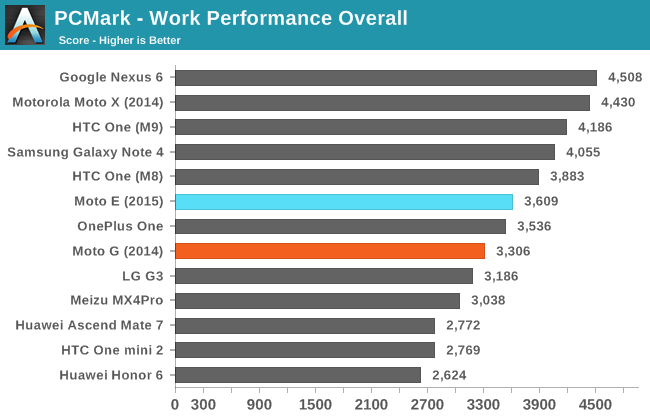 PCMark is a benchmark that focuses more on real-world scenarios where race to sleep speed is paramount. In it we see another modest overall lead compared the Moto G. The writing test in particular shows a great deal of improvement, while the video playback test is slightly worse which I suspect is the result of the Moto E's flash storage speeds causing video seek times to be longer than the Moto G. 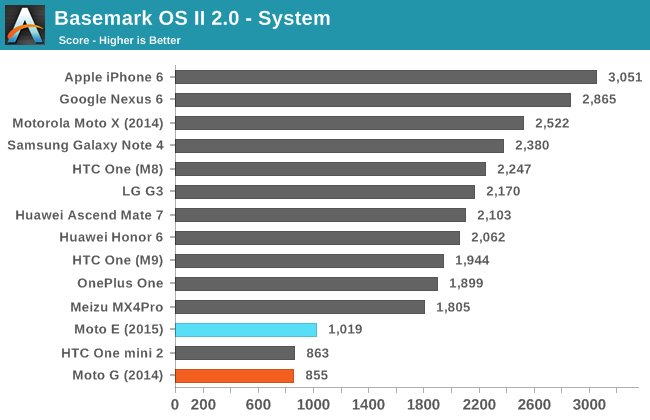 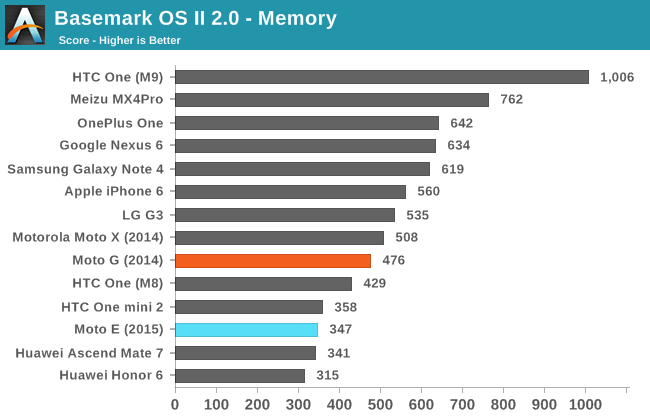 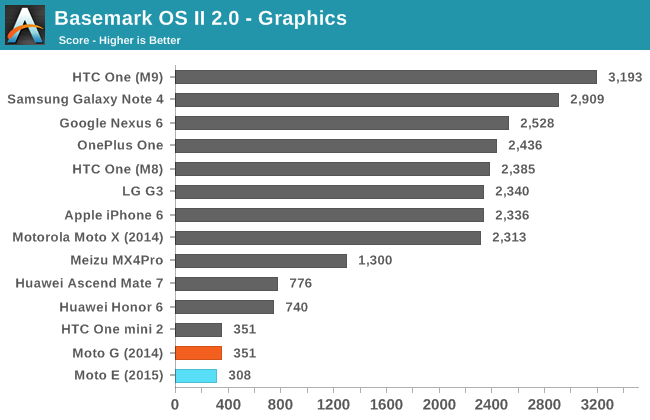 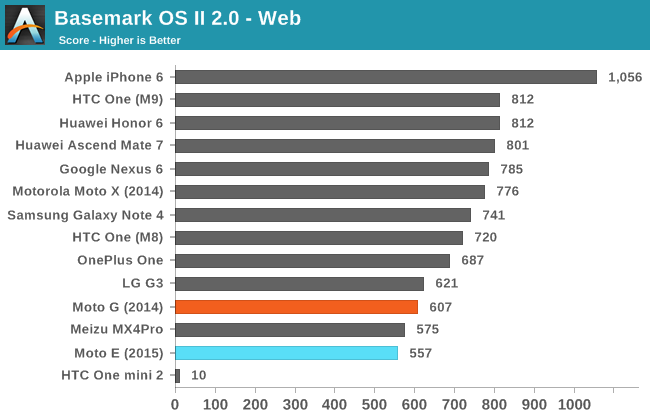 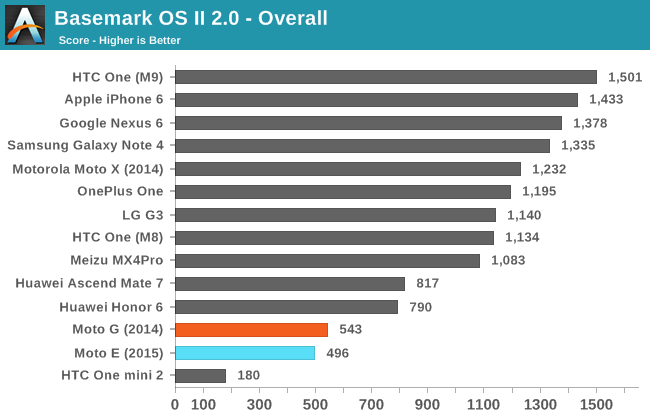 In BaseMark OS II we actually see the Moto E performing worse than the Snapdragon 400 powered Moto G. The Moto G's higher score in the memory subtest helps to give it an advantage overall, and I'm at a loss to explain why the Moto E scores 50 points lower than the Moto G in the Web subtest. I can only imagine that the cause is related to software tuning but I can't definitively say why the gap is as large as it is.